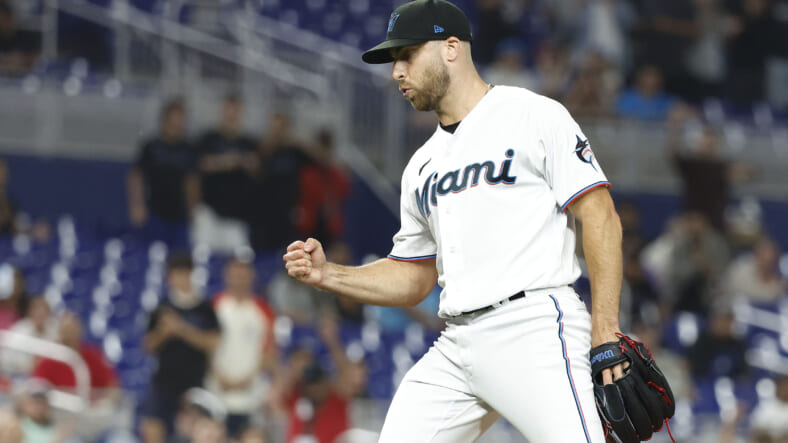 With the season-ending injury to Michael King, the New York Yankees and general manager Brian Cashman now have to inject more bullpen talent into the roster.

As we saw on Saturday against the Baltimore Orioles, pulling up Shane Greene wasn’t going to get the job done. Cashman knows he must make a move, and with names like David Robertson floating around social media, there is one under-the-radar option the Yankees could target from the Miami Marlins.

34-year-old veteran relief pitcher Anthony Bass stands out as a potential choice. At 6’2″ and 200 pounds, the right-handed pitcher is currently on a two-year, $5 million deal with a club option for the 2023 season. He is earning $2.5 million this year, but the Yankees would have an opportunity to extend him for one more season.

Here’s what Anthony Bass would bring to the Yankees:

Bass is primarily a sinker/slider pitcher. Opposing hitters are batting just .186 against his sinker and .185 against his slider. He’s generating a 38.2% WHIFF rate with his slider and a 28.4% put-away rate, representing his best strikeout pitch.

Bass incorporates a 4-seam fastball and split-finger at a combined 15%, but they are his two worst pitches by a fair margin. His sinker averages out at 95. 3 mph, featuring solid velocity.

Acquiring Anthony would be far less cumbersome than an option like David Bednar from the Pittsburgh Pirates. The Yankees may only have to give up a middling prospect or maybe Estavan Florial.

While Florial‘s value is a fraction of it once was, he’s having a fantastic season, batting .298 with a 38% on-base rate, 12 homers, and 33 RBIs. He’s also stolen 28 bases, hosting a 28.3% strikeout rate and 11.5% walk rate. For a team looking for young outfielders that barely have any MLB service time, Florial is a great pick-up.

Cashman may see more value with Florial than others, so the Yankees could consider flipping a decent prospect with upside like Brendan Beck or Anthony Garcia.