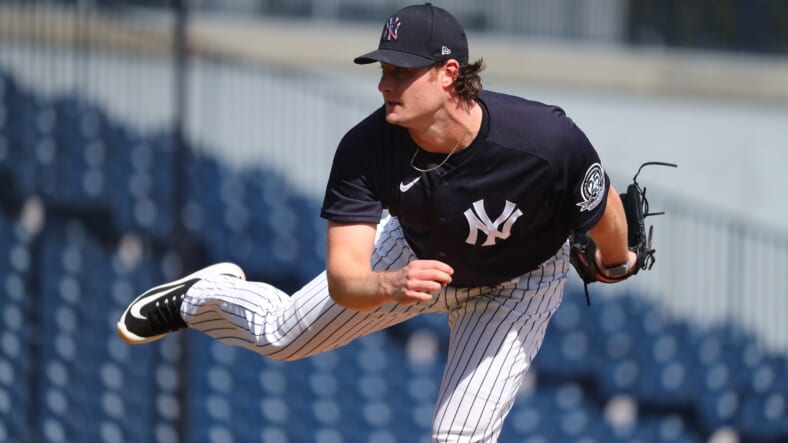 After being so quiet for most of the offseason while waiting to see if they could resign, the 2020 batting champ, DJ LeMahieu, the New York Yankees have come to life. They are quietly building one of the best starting pitching rotations in all of baseball. Last season they signed one of the top two pitchers in baseball in Gerrit Cole. Unfortunately, the banged-up and tired pitchers behind him couldn’t get the deal done in the postseason after losing the East division to the Tampa Bay Rays.

After the season was over, the Yankees cleaned house. They let walk Masahiro Tanaka, James Paxton, and J.A. Happ. Although there was talk that the Yankees wanted Tanaka back in 2021, that is not likely to happen. The Yankees also have an up and coming group of baby bomber pitchers either Major League-ready or close to it.

The New York Yankees knew they needed pitching help. Still, with the owner, Hal Steinbrenner wanting to stay below the luxury tax threshold, general manager Brian Cashman had to wait to see what it would cost the club to sign LeMahieu so he would know what money he had to spend. Cashman worked his magic and gave DJ a six-year contract, more than what he was asking for, but for only $15 million a year, less than the one-year qualifying offer the DJ rejected.

Armed with some dollars, Cashman immediately signed two-time Cy Young Award winner Corey Kluber to a one year deal at $11 million. The Yankees turned off the snooze button on January 15, 2020, and signed Kluber to bolster their starting pitching rotation. He will become a free agent again at the end of the year. After viewing a pitching demonstration for 25 teams at the Yankeeâ€™s director of player health and performance, Eric Cresseyâ€™s Florida facility, where Kluber has spent most of his offseason, the Yankees sealed the deal.

Kluber dazzled scouts with his Florida demonstration and appeared very healthy. He commanded his pitches well, according to scouts, and flashed typical velocity for this point in the offseason. That performance caused the New York Yankees to take a chance on the 34-year-old. They signed him just three days later. The Yankees didnâ€™t sign Kluber blindly; they have been watching his rehab with Cressey very carefully.

New York Yankee fans will be delighted to watch Corey pitch. One of the reasons he is so successful is that he is a five-pitch pitcher that can complete games. Kluber throws five pitches: a four-seam fastball, a sinker, a cutter, a breaking ball, and a change. His strikeout pitch is his dominant two-seam sinker. He has been a workhorse and will be unfazed by playing in New York as he is stoic on the mound and doesnâ€™t lose his cool. By all accounts, he is also a nice guy and a good teammate.

January 24th, the Yankees finalized a deal to bring Jameson Taillon to the Bronx from Pittsburgh, where he was a minor and Major League mate of the Yankee ace Gerrit Cole. Over the years, they developed a bond and became friends. Now they are reunited at Yankee Stadium.

Taillon is a solid mid-level rotation pitcher with a huge upside. Taillon is in the prime of his career after coming back from this second Tommy John surgery. He did not pitch during the 2020 season while rehabbing. The Yankees had to give up Miguel Yajure, Roansy Contreras, Miakel Escotto, and Caanan Smith to land Taillon in the Bronx. ESPN announced the deal.

The dual Canadian U.S. citizen born in Lakeland, Florida, signed a letter of intent to attend Rice University but instead accepted a $6.5 million signing bonus to play for the Pittsburgh Pirates. He worked his way through the minors, where he succumbed to his first Tommy John surgery. He made his Major League debut in 2016 and made the starting rotation for the Pirates in 2017. He has a career record of 29-24 with an ERA of 3.67 in 82 starts with 419 strikeouts and a WHIP of 1.247.

With these new pitchers on board, it will be a fascinating spring training at George M. Steinbrenner Field as the Yankees evaluate these new pitchers, the returning Domingo German, and all the young baby bombers. How these pitchers perform will give manager Aaron Boone insight into setting up the pitching rotation for the 2021 season.

The rotation will start with ace Gerrit Cole then most likely Corey Kluber. After that is becomes less clear. Third, in the rotation will be either Jameson Taillon or Domingo German. German was the Yankee’s best pitcher in 2019 when he went 18-4. The pitcher that does not get the third spot will most likely get the fourth spot in the rotation. To anchor, the rotation will be either Deivi Garcia, who made his pitching debut last season, or the Yankees’ other Tommy John veteran Jordan Montgomery. Whichever the case, the Yankees still have Clarke Schmidt and Michael King to filling for any injuries. Luis Gil and Luis Medina are close to ready in the minors.

Sometime in June or July, Luis Severino will be returning to the team after his recovery from Tommy John surgery. Both Domingo German and Luis Severino are coming back after not pitching for a year or two, respectively. If they can pitch to their previous form and both Kluber and Taillon can rise to their best numbers, the New York Yankees will have one of the most potent pitching rotations in all of baseball. But even if all don’t perform, the Yankees have enough other arms to let them compete at a high level.