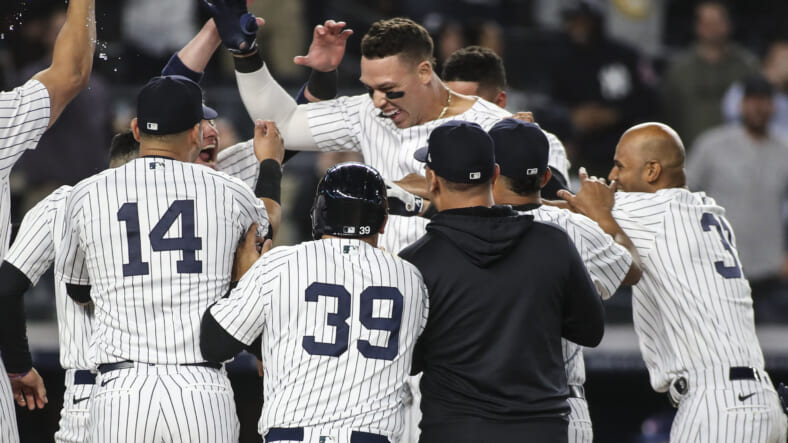 The 2022 MLB season has now come and gone, and the New York Yankees await their opponent in the ALDS. In a year that was more or less a roller coaster of a ride, one person remained consistent throughout the struggles.

Aaron James Judge, the most recognizable superstar in the sport of baseball today, has single-handedly carried this team to the top of the mountain. Judge has done everything in his power to bring success back to the Yankees organization, and since he first put the league on notice back in 2017, has done just that.

Judge put the Yankees and city on his back:

The Yankees may not have a World Series ring to speak for their successes of the 2010’s and early 2020’s (albeit it isn’t a ton to write home about), but without Judge, much of that wouldn’t have been achieved. This year, however, the cards are all on the table, and the team is making a push for the much evasive no. 28. Judge has led this team through the Valley of Death, and unlike in the story, the five-hundred emerged bruised and battered but with their sights set on glory. The Yankees’ success this season can be attributed to numerous key positions and guys stepping up, but Aaron Judge is the reason they are where they are.

Judge chose to bet on himself prior to this season, as he turned down a 7-year contract offer worth $213.5 million. The general public was primarily split on their reactions, with many saying that he was foolish to turn down life-changing money, as anything can happen. Yet, there were others like me who believed the Yankees lowballed him and that he was worth far more. This year, Judge silenced every critic out there and let his play do the talking.

There has never been and may never will be another season like this one that Aaron Judge had. It is simply the greatest season without the usage of steroids in the post-integration era of baseball. Even in a down year offensively, where league averages were through the floor, Judge put up a season that hasn’t been seen since Barry Bonds did so. Yet, like it or not, Barry Bonds used needles and pills to get his thrills, even if I do believe his 73 is the true HR record. Regardless of such, Judge’s 62 is the American League record and will stand as such until he chooses to break it again in the next few seasons.

If Ohtani is a unicorn, Judge’s 2022 season was a Werewolf:

Shohei Ohtani is a remarkable baseball player, one of the most talented to ever play in the league. Yet, that doesn’t mean that he deserves to win the MVP every year because of his two-way abilities. When his team can finish with a better record than the Chicago Cubs, then sure, he can be in the conversation for Most VALUABLE Player.

In the second half of the season, Yankees players not named Aaron Judge OPS’d a collective .653 going into the final game of the season. Aaron Judge’s OPS during that same period was 1.286. He hit 29 HR and put up an earth-shattering 252 wRC+ across the 68 games he played in the second half. The Yankees managed to go 35-35 following the All-Star break, but without Aaron Judge, they surely would’ve fallen out of first place and been jockeying for a Wild Card spot.

Ohtani’s Angels, in that same span, you might ask, went 34-36, but were never in a contentious spot, to begin with. The importance of Ohtani to LAA cannot be overstated, but without Judge, the team legitimately falls from first-round bye to scraping by. Take WPA, for example, Win Probability Added, a great stat to gauge individual contributions — especially used with WAR. Judge posted a 7.71 this season whereas Ohtani posted a 5.52. That means that Judge’s abilities, both at the plate and in the field defensively, were more valuable to his team than Ohtani’s.

Hate it or love it, Judge deserves to be the MVP. If you are one of the guys that thinks WAR is the end-all-be-all, then Judge’s 11.4 fWAR is the most since Bonds in ’04. Mookie Betts won MVP back in 2018 after an amazing year, in which he lapped the field with his 10.6 fWAR and 30/30 year, as Boston went on to win a ring.

Judge this year leads all of baseball in fWAR by a considerable margin, broke Roger Maris’ 61-year-old record by hitting 62, and put the team on his back. All this whilst playing for the most demanding and pressure-heavy franchise in American sports and not batting an eye the entire time.

Judge did everything and then some, and will go down in history forever:

The only time Judge showed any frustration was when he popped up his final AB of the first Rangers game in the doubleheader, and that was more just “get this off my back” than anything. The next game, he led off the game with number 62 and get his curtain call — in Texas, nonetheless.

Judge’s 2022 season wasn’t just a great season, it was a historic season. The Pinstripes never seemed to be too heavy for Judge, and even following his electric 2017 season in which he was robbed of his first MVP award, he kept his head up and continued to push through. There’s no denying his impact on and off the field for his teammates, and his impact in growing the game amongst the youth is just as strong.

Aaron Judge should be the obvious, unanimous, and undisputed MVP following this year. He broke records, did it whilst being the best teammate possible, and didn’t put himself on a pedestal of any sort.

His season will go down in history, I’ll tell my kids’ kids about what Judge did for me as a fan and what his impact meant for the Yankees organization. Kobe Bryant best embodied the ‘mamba mentality,’ as in this situation, he’d be saying, “what’s there to smile about, job’s not finished,” and I believe Aaron Judge is cut from the same cloth of talent. He cares about winning baseball games more than any individual accolade, and with his team actually competing, it’s hard not to blame him.

As for Ben Verlander, his whole year went down the drain in June when the Angels were eliminated from postseason contention.