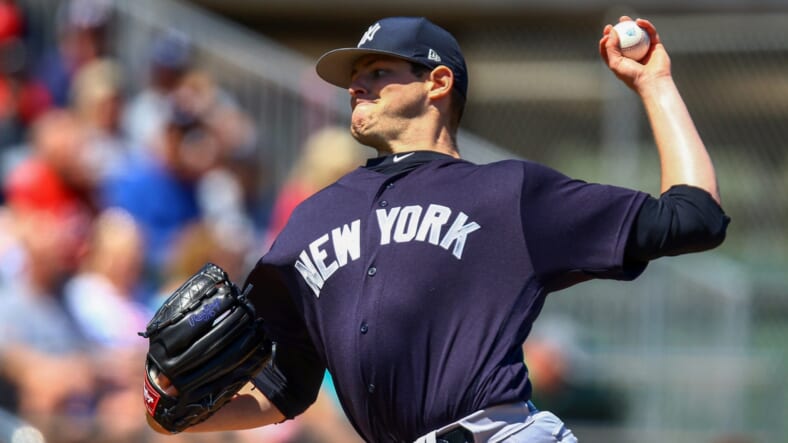 The New York Yankees won their game on Tuesday against the Baltimore Orioles. Mike Ford powered the Yankees with his two-RBI double in the game, but what is just important is Jordan Montgomery’s two-inning start in the game. Montgomery, in the shortened 2020 season, went 2-3 with an ERA of 5.11. In yesterday’s game, he struck out two and gave up a run in two innings of pitching. That’s an ERA of 4.50, still above his career ERA of 3.22.

The New York Yankees need Jordan Montgomery to be a good pitcher more than ever before. Two years out from his Tommy John surgery, the Yankees need him to be solid in a pitching rotation that now features three pitchers that have not pitched in at least the last season. The Yankees added Corey Kluber, a bad luck pitcher with a shortened 2019 season being hit by a pitch and a 2020 season that saw him pitch only one inning with a shoulder injury. Jameson Taillon is coming back from two Tommy John surgeries, and Domingo German suspended for a year. The Yankees need Montgomery to be a stabilizing force in that rotation.

After the game on Tuesday, Montgomery revealed that he has been getting important text messages from CC Sabathia and New York Yankee great Andy Pettitte. He explained that both Pettitte and CC Sabathia, with whom he shared a locker room from 2017-19, both text regularly, and Pettitteâ€™s notes have been extremely on-message ahead of this season. Pettitte told him: “Your fastball is better than mine, so you’ve just got to throw it in there for strikes.”

If Montgomery continues to trust his fastball like Pettitteâ€™s advised, the moderate-ceiling sky could be the limit. Itâ€™s a darn good pitch, after all. Pettitte, who hasn’t been shy helping pitchers in recent years, also helped CC Sabathia transform from a heat thrower to being a good pitcher in his later years. Now he is regularly texting “Monty” to increase his confidence. With Montgomery’s importance to the Yankees, let’s get to know him better.

After high school, he enrolled in the University of South Carolina. He played for the South Carolina Gamecocks, where he again received awards, this time Freshman of the week and Freshman All-American. He played well enough in college to warrant the attention of major league baseball scouts.

In the 2014 major league baseball draft, Montgomery was selected in the fourth round by our Yankees. After his college year, the Yankees limited his pitching to 19 innings as he went 1-1 with an ERA of 3.79. In 2015 Jordan was promoted to the Charleston River Dogs, but shortly thereafter, he was promoted again to the Florida State League for the advanced A Tampa Yankees.

Montgomeryâ€™s pitching continued to impress the Yankees, and in 2016 he began the season with the Trenton Thunder but was soon promoted to the AAA Scranton Wilkes/Barre Rail Riders. While there, he pitched the triple-A National Championship game in which he won for the Rail Riders.

On April 12, 2017, Monty was promoted to the major leagues, where he made his New York Yankee debut against the Tampa Bay Rays in a no-decision outing. In his second game, he earned his first major league win against the Chicago White Sox. On June 9th, he pitched a career-high seven innings while striking out eight against the Orioles. Before the All-Star Break, Montgomery pitched to a 3.65 ERA, striking out 87 batters in 91 and third innings. On July 25, he took a no-hitter into the sixth inning against the Reds. In 29 starts in 2017, Montgomery finished with a 9-7 record and a 3.88 ERA.

After six starts when he was 2-0 with an ERA of 3.86. on May 1, he left a game against the Astros with elbow tightness. He was put on the IL, and it was discovered that he had a flexor strain and that he would be out 6-8 weeks. But in June, other problems arose, and he was scheduled to have Tommy John surgery which typically takes a year to a year and a half to recover from.

In 2019 he started the season on the 60 day IL as he recovered from the surgery.Â  At the end of the season, he pitched in two no-decision games. In 2020, Montgomery had impressed, appearing to be back to full strength in spring training and summer camp.

During the 2020 coronavirus season, Monty was happy to be back in the rotation. He went 2-3 with an ERA of 5.11. Now he has one start in spring training behind him; he can continue developing and becoming an important part of the 2021 pitching rotation.