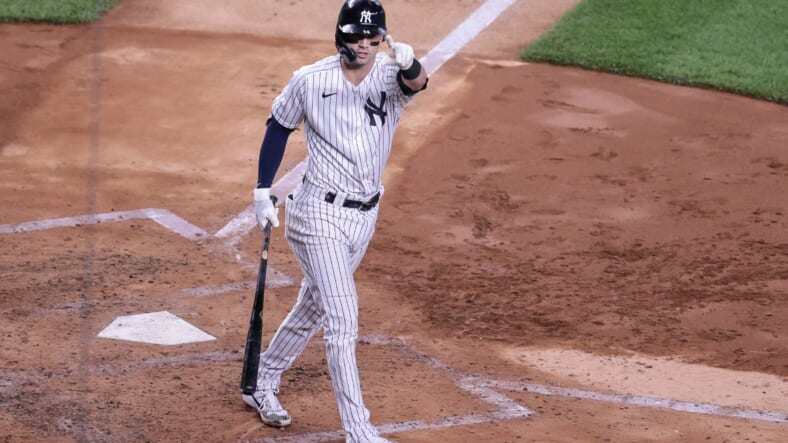 The New York Yankees met the Baltimore Orioles yesterday in the series finale of the four-game set. The Orioles came out with the win, with the two teams splitting the series in Baltimore. The Orioles won the first game, the Yankees took the middle two, and the Orioles took the last game in a 10 inning win. Jordan Montgomery got the start for the Yankees with Gary Sanchez catching, and Jorge Lopez started for the O’s. Neither pitcher was involved in the outcome of the game. The Yankees could have won the game if it wasn’t for some bad luck in the ninth when Gleyber Torres hit a ground-rule double that bounced into the stands, tieing the game but not allowing DJ LeMahieu to score.

Jordan Montgomery didn’t have his best of games, but I wasn’t bad either. He pitched five full innings allowing 2 earn runs. His command wasn’t as good as his last outing, and he only stuck out one batter over the span. But he didn’t let the game get away from the Yankees. Things were still looking good when Chad Green came to the game to replace Montgomery; he pitched two scoreless innings striking out 4 Orioles.

In the eighth inning Darren O’Day, who was stellar, came into the game to replace Chad Green; he gave up an earned run and couldn’t strike out anybody. Aroldis Chapman with the Yankees tied in the ninth and struck out the side. In the bottom of the 10th, the usually perfect Jonathan Loaisiga gave up the winning run. I’ve said it before, and I’ll repeat it when the Yankees don’t hit home runs; they don’t win games.

Without a doubt, Giancarlo Stanton is the hottest of the Yankee hitters. He leads the team in home runs (6) and shares the most RBI’s (15) with Gio Urshela. Last night although not hitting a home run, he went 3 for 5. In the previous game, he also went 3 for 5 with a home run. In just two games, he has brought his batting average from .162 to .250. These performances show that if Stanton can remain healthy, he can be an MVP.

Before yesterday’s game, the New York Yankees traded Mike Tauchman for Oakland giants pitcher Wandy Peralta and another player to be named later. Yankee fans and this writer are not all that thrilled with the trade. Tauchman was the better hitter, although he may not be that much of an upgrade except for his baserunning and ability to steal bases.

For his part in last night’s game Tyler Wade, couldn’t put down an everyday bunt, possibly causing the New York Yankees from winning the game. Tauchman may have been the better option, but now the Yankees are stuck with Tyler Wade. Tauchman put up some pretty good number in 2019, but a poor season in 2020 and a slow start in this season sealed his fate. For that, we have a pitcher that no Yankee has even seen throw a pitch. I guess a good question is how many left-handed relievers do the Yankees need?

The New York Yankees start a three-game series with the Detroit Tigers tomorrow night at Yankee Stadium. Game one will feature the Yankees’ ace Gerrit Cole against the Tigers’ Tarik Skubal.