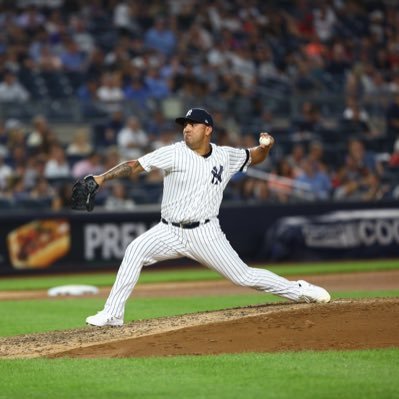 This was the last game between the New York Yankees and the Toronto Blue Jays tonight, and the Yankees hoped to capture a win and save being shut out in the series. The Yankees have lost all three of their games against the Jays and two losses from the Orioles for 5 straight losses when fighting to hold on to a wild card slot in the AL East. The Yankees pitted Nestor Cortes Jr. against Jose Berrios. Unfortunately, the Yankees lost the game 6-4 for their sixth consecutive loss.

Against Nestor Cortes Jr., Bo Bichette led off for the Jays and started with a Blue Jays led with a massive homer to left field. Semien followed with a single to left. Vlad Guerrero struck out on a high fastball. Teoscar Hernandez doubled, with Semien going to third. Alejandro Kirk flew out to Aaron Judge in right, and Semien didn’t challenge his throw. Lourdes Gurriel Jr. went down looking, getting Cortes out of the inning, only giving up one run. At the bottom, Brett Gardner led off by walking. Aaron Judge hit into a force out as the ball went into the camera well. Anthony Rizzo flew out to the left-field foul territory. Giancarlo Stanton popped out to the infield. Blue Jays 1 Yankees 0.

The second inning was led off by Randal Crichuk, who flew out to Judge. Danny Jansen struck out. Kevin Smith also struck out to end the half. At the bottom, Gleyber Torres led off by grounding out to third. Joey Gallo flew out, and Sanchez flew out for an easy inning for Berrios. Jays 1 Yankees 0.

Bo Bichette led off the third inning by singling to left. Semien flew out to Judge in right. Guerrero hit into a double play to end the half. At the bottom, Tyler Wade ground out to first. Gio Urshela singled. Brett Gardner waved at a pitch for an out. Judge singled to right. Rizzo, with two on and two outs, grounded out, stranding two. Blue Jays 1 Yankees 0.

The fourth inning was led off by Hernandez, who lined out to Gardner. Kirk flew out to Gallo in far left. Gurriel flew out to Rizzo. At the bottom, Stanton was out; as he tried to reach aÂ  double, he hit to left. Torres struck out swinging. Gallo went down swinging to end the inning. Blue Jays 1 Yankees 0.

Randal Grichuk led off the fifth inning went yard into the left-field stands. Jansen flew out to Judge in right. Smith ground out to Urshela, who made the catch of the rocket look easy. Bichette went down on strikes to end the half, but the Jays tacked on a run. At the bottom, Sanchez advanced when he was hit by pitch. Wade struck out swinging. Urshela hit into a double play to end the inning. Blue Jays 2 Yankees 0.

Marcus Semien led off the sixth inning by skying one to the infield for the first out. Guerrero flew out to left. Hernandez hit one off of Cortes that bounced into the center for a single. Kirk grounded out on Cortes’s 103rd pitch. At the bottom, the top of the lineup for the Yankees was up. Gardner flew out to the left-field wall. Judge singled. Rizzo got a two-run home run into the right-field stands. Stanton ground out. Torres went down on strikes, but the Yankees tied the game. New York Yankees 2 Blue Jays 2.

The seventh inning was led off against new Yankee pitcher Sal Romano by grounding out to second base. Grichuk struck out on a Romano slider. Jansen got a double off the left-field wall. Jake Lamb pinch-hitting for Smith was hit by a pitch. Bichette singled driving in Jansen. Semien walked to load the bases. Guerrero faced the new Yankees pitcher Wandy Peralta and struck out, leaving the bases loaded. At the bottom, Gallo walked. Sanchez went down on strikes. Wade struck out swinging. Urshela facing new pitcher Joakim Soria struck out. Blue Jays 3 New York Yankees 2.

Hernandez led off the eighth inning by striking out. The Yankees were scoreless in the eighth, although the Blue Jays picked up another run. Blue Jays 4 and the Yankees 2.

In the top of the ninth against Chad Green Guerrero Jr. homered into the center-field stands. Hernandez singled. Valera doubled driving in Hernandez. Gurriel singled. Dyson came in to pinch run for Gurriel. Crichuk struck out. Jansen went down on strikes, but the Blue Jays picked up another two runs. At the bottom, with the game on the line, Torres led off and flew out to center. Gallo struck out looking. Sanchez homered just inside the left-field foul pole. Luke Voit pinch-hitting for Wade followed with another home run. Gio Urshela struck out to end the game and give the Yankees their sixth loss in a row. It was also the first time since 1908 that the Yankees have lost a series without ever leading the series at Yankee Stadium.

The final score was the Toronto Blue Jays 6 and the New York Yankees 4. The winning pitcher was Jose Berrios, and the loser was Sal Romano.