New York Yankees Recap: Yankees make a statement shutting out the Astros in game one 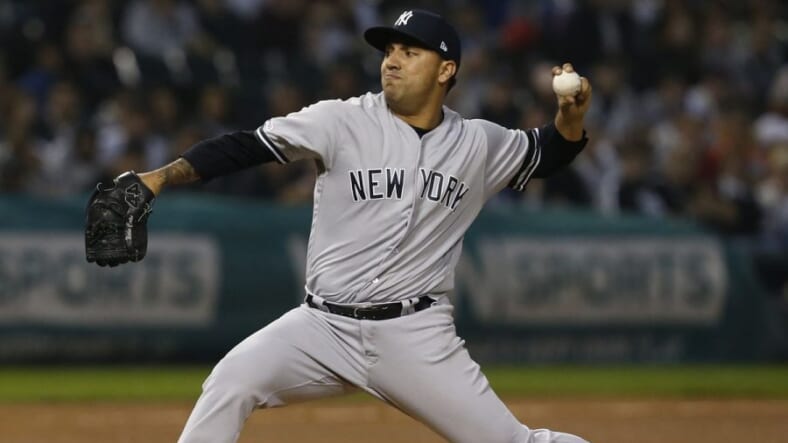 Tonight the New York Yankees met up with the hated Houston Astros at a packed Minutemaid Park in Houston for the first game of a three-game set. Nestor Cortes Jr. was on the mound for the Yankees and Jake Odorizzi for the Astros. If there are two teams in baseball that donâ€™t like each other, itâ€™s the Yankees and Astros. It was proven that the Houston Astros cheated in the 2017 season and postseason. That cheating may have cost the Yankees a trip to the World Series and Aaron Judge an MVP award that instead went to the Astros Jose Altuve.

In the first inning, Odorizzi faced the Yankees DJ LeMahieu, who ground out to left. Aaron Judge singled. Gary Sanchez singled for back-to-back singles. With men on first and second and one out, Giancarlo Staton hit into a double play to end the threat. Jose Altuve led off the bottom by being tagged on running for first. Myles Straw ground out to second. Michael Brantley lined out to Gardner in second. No score.

At the top of the second, Gleyber Torres faced off against Odorizzi and singled to center. Rougie Odor always singing for the fences stung out swinging. Gio Urshela singled. Brett Gardner, who has not hit well off of Odorizzi, flew out to left-center. Tyler Wade, with two on and two outs, popped out to left to leave two on. At the bottom, Yuli Gurriel flew out to Judge in right. Yordan Alverez lined out to first. Kyle Tucker got a ground-rule double bouncing into the bullpen. Abe Toro looped to Judge. No score.

The top of the third saw the top of the lineup for the Yankees. LeMahieu tapped out to first. Judge lined out to center. Sanchez lined out to third to end the half. At the bottom, Jason Castro lined to LeMahieu. Robel Garcia walked for the first walk of the game. Altuve skied to center. Staw flew out to Wade in left. No score.

Giancarlo Stanton struck out at the top of the fourth inning, tipping it into the catcher’s glove. Gleyber Torres got his second hit of the night to left. Rougie Odor .300 over his last seven games ground into a force out. Urshela smoked back to Odorizzi for a single. Gardner got a two-run double driving in Torres and Odor for the two-run lead. Wade chased for the final out. At the bottom, Brantley struck out. Gurriel popped out to second base. Alverez singled to second with a poor transfer to Voit. Tucker, with one on and two outs, flew out to Gardner in center. New York Yankees 2 Houston Astros 0.

The fifth inning saw the top of the lineup for the New York Yankees. LeMahieu ground out. Judge flew out to foul territory in right. Sanchez popped out to short. At the bottom of the fifth, Toro facing Cortes Jr., struck out swinging. Castro ground out to first. Garcia walked, and that was the end of the night for Cortes jr. For the first time as a starter pitched into the fifth inning and had a season-high 69 pitches. He was replaced by Lucas Luetage, who faced Altuve, who Luetge fanned out. Yankees 2 Astros 0.

The top of the sixth inning was led off by Giancarlo Stanton, who flew out to Brantley. Torres, with two hits on the night, hit into the infield for that second out. Odor struck out swinging. At the bottom, Straw against Luetge ground out to short. Brantley popped out to Urshela. Gurriel ground out to third to end the inning. New York Yankees 2 Astros 0.

The seventh inning was led off by Urshela, who was two for two on the night, slow rolled to third but couldn’t beat it out. Gardner worked a walk. Wade hit a double down the left-field line with Gardner moving to third base. LeMahieu, with two on and one out, hit the 10th pitch of the at-bat up the left-field line driving in two Yankee runs. Aaron Judge singled to third. With men on the corners and one out, Sanchez faced the new pitcher Brandon Bielak and ground out to second for a double play, but the Yankees picked up another two runs. At the bottom, Alverez struck out. Tucker doubled. Toro flew out, and Castro lined out to first to end the inning. Yankees 4 Astros 0.

The eighth inning was led off by Stanton, who ground out to third. Torres chased for the second out. Odor hit one into center over short Altuve’s head for a single. Urshela flew out to left to end the half. Robel Garcia led off the bottom of the eighth by Garcia, who struck out against Green. Altuve flew out to Gardner in center. Straw ground out to short to end the inning. New York Yankees 4 and the Houston Astro 0.

At the top of the ninth inning, Brett Gardner tapped out to the pitcher. Wade got thrown out on a ground ball to short. LeMahieu smoked on up the middle. Judge got his career 500th hit. Sanchez struck out to end the half. With the last licks on the Astros, Michael Bentley led off against the Yankees closer Jonathan Loaisiga and rolled to second for the first out. Yuli Gurriel ground out to second. Yordan Alverez struck out on a 100 mph fastball by Loaisiga to end the game in a shutout.

The final score was the New York Yankees 4 and the Houston Astros 0. The winning pitcher was Lucas Luetge, and the loser was Jake Odorizzi.