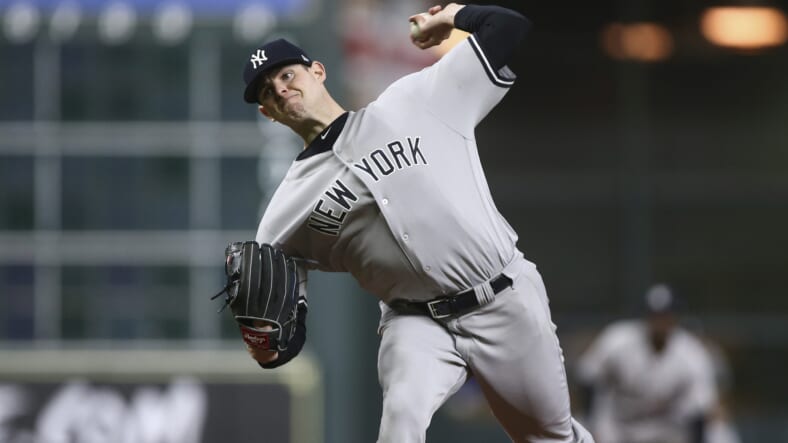 In today’s matinee, it was the finale of the New York Yankees Baltimore Orioles four-game series. The Yankees’ Jordan Montgomery faced the Orioles, Jorge Lopez. It was a mostly cloudy ski at Orioles Park at Camden Yards with a game-time temperature of 79 degrees with only a slight chance of a passing shower. The Orioles won the first game, and the Yankees won the last two games holding down the Orioles to just one run while the Yankees scored 12 runs.

At the top of the first inning, DJ LeMahieu led off by grounding out to short. Giancarlo Stanton flew out to center field. Gleyber Torres ground out to third with the Yankees going down in order for Lopez. At the bottom, with Jordan Montgomery on the mound, Cedric Mullins singled past Urshela at third. Austin Hays had a sac bunt moving Mullins to second. Trey Mancini singled, driving in Mullins for the Orioles early lead. Franco hit into a force at second for the second out of the inning. Severino, with two outs, hit back to the pitcher to end the inning. Orioles 1 Yankees 0.

Gio Urshela led off the second inning for the New York Yankees by lining out.Â  Rougie Odor struck out, Aaron Hicks walked. Hicks moved to second on a passed ball. Gary Sanchez lined to left. At the bottom, Mountcastle singled to center. Stewart hit into a double play with Odor tagging Mountcastle and throwing to first for the out. Urias walked. Valaika flew out to Hicks. Orioles 1 Yankees 0.

At the third, Clint Frazier lined out to first base. Brett Gardner popped out to short. LeMahieu blooped one into center. Stanton lined to short for a single. Torres went down looking to end the half.Â  Mullins, at the of the third, lined out to Odor. Hays flew out to Hicks. Mancini singled, and Franco flew out to end the inning. OriolesÂ  Yankees

Gio Urshela ground out to start the fourth inning. Rougie Odor was hit by a pitch and advanced to first base. Hicks got to first on a force out of Odor. Gary Sanchez had a base hit to left. With two on and two outs, Frazier hit to the right-field wall, but it was caught to end the half and leaving two on base.Â  Severino led off the bottom hit to the right-field walls, but Frazier’s quick heads held him to a single. Mountcastle flew out to a diving catch by Frazier.Â  Stewart flew out to Gardner in left. Urais ground out to Torres to end the inning. Orioles 1 Yankees 0.

The fifth inning saw Brett Gardner at the plate singling to left field. LeMahieu walked, causing a pitching change. Adam Plutko faced Giancarlo Stanton, who singled to no man’s land in center field loaded the bases with no outs. Torres popped out to first, holding the runners. Gio Urshela struck out swinging. Odor ripped one slowly into right field while Gardner and LeMahieu scored for the Yankees. Hicks grounded out to end the inning, but the Yankees picked up two runs on the great situational hitting by Rougie Odor. Pat Valaika led off the bottom by grounding out. Mullins struck out swinging. Hays flew out to Hicks to end the inning. New York Yankees 2 O’s 1.

At the top of the sixth, Gary Sanchez walked. Frazier hit into a double play for two outs in the inning. Gardner ground out for a fast inning for Plutko. At the bottom, Montgomery entered the inning with 71 pitches facing Mancini, who promptly tied up the game with a homer over the left-field wall and knocking Montgomery out of the game. Chad Green (0.68) took over for Monty, facing Franco, who popped out to second. Severino popped out toÂ  Sanchez. Mountcastle struck out swinging, and Green got out of any further damage. Tie score at 2.

The seventh inning was led off by LeMahieu, who flew out to Mullins. Stanton hit his third hit of the day, a single to left. With that hit, Plutko was out of the game. Torres faced Travis Latkins Sr. With one on and one out, he hit into a double play ending the half, leaving Stanton stranded at first base. At the bottom, with Green still on the mound, Stewart struck out swinging. Urias struck out on a foul tip. Valaika struck out swinging. Yankees 2 Orioles 2.

Gio Urshela walked to start the eighth inning. Aaron Judge came in to pinch hit for Odor. Judge struck out, so the strategy failed. Hicks struck out. Sanchez popped out to second again, leaving a man on base. The bottom of the eighth saw Darren O’Day on the mound for the Yankees against Mullins, who walked. Hays moved to third base on a ball that got away from Sanchez as Mullins, with good speed, scored, giving the Orioles a one-run lead. Mancini grounded to Torres for the first out. Franco popped out to the infield. Severino lined out to left, but the Orioles took the lead. Orioles 3 New York Yankees 2.

At the top of the ninth inning, with last licks on the line for the Yankees, the number 8, 9, and 1 hitter faced the Orioles closer, Cesar Valdez, on the mound. Pinch-hitting for Frazier, Mike Ford walked. Gardner struck out. LeMahieu walked. Giancarlo Stanton struck out. With the Yankees final out at the plate in Gleyber Torres, he doubled to left, tieing up the game at 3 apiece. Ushela lined out to end the inning tied at 3. The bounce into the stands was bad luck for the Yankees as the ground-rule double prevented LeMahieu from scoring.

At the bottom of the ninth, the Yankees sent their closer to the mound, Aroldis Chapman. He faced Mountcastle, who stuck out on the 8th pitch at-bat. It was 101 mph. Stewart struck out looking. Urias struck out for a 1-2-3 put down by Chapman. On to the 10th inning.

At the top of the tenth, Tanner Scott took the mound for the Orioles with ghost runner Gio Urshela at second base; Tyler Wade led off for the Yankees, who failed to get a bunt down. Aaron Hicks chopped back to Scott for out number two. Gary Sanchez was intentionally walked. Mike Ford at the plate went down on strikes as the Yankees failed to take the lead in the game.

At the bottom of the tenth, Jonathan Loaisiga was on the mound for the Yankees facing Valaika with ghost runner Urias at second. Valaika sac bunted Urias to third base. Cedric Mullins had a sac fly to left, scoring Valaika for the Orioles win. The Yankees split the four-game series with the Orioles. The final score was the Baltimore Orioles 4 and the New YorkÂ  Yankees 3. The winning pitcher was Tanner Scott the loser was Jonathan Loaisiga.