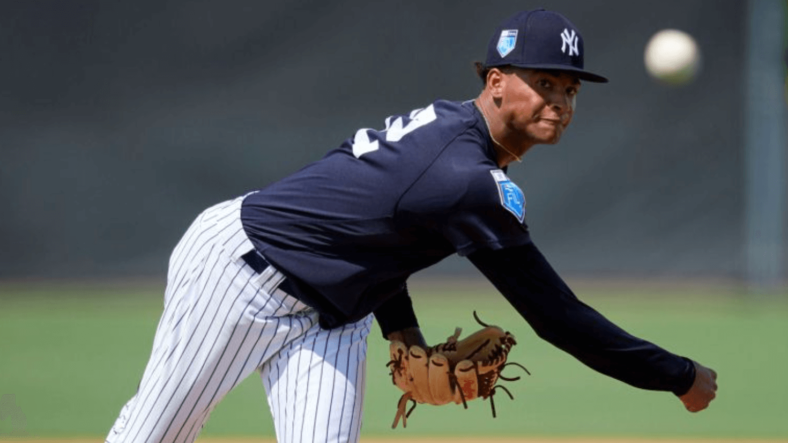 Today was the last game of spring training for the New York Yankees. The game will be at home at George M. Steinbrenner Field before they board a plane for Yankee Stadium. The game was started by the Yankees’ best pitcher in the spring, Domingo German; he faced the Detroit Tigers’ Jose Urena. On their last day in Tampa, they were blessed with an 81-degree game-time temperature, and the game was played under partly sunny skies.

With 13 strikeouts over 9 innings and not having allowed a run in the spring, German took to the mound. Victor Reyes singled off German. Daz Cameron flew out, Jeimer Candelario struck out on three pitches. Miguel Cabrera singled, moving Candelario to third base. The hit fell in no man’s land that couldn’t be caught by three Yankees that tried for. Jonathan Schoop ground out to Urshela to end the half and leave two Tigers on base.

At the bottom, DJ LeMahieu led off. He ended Urena’s season last year when he broke Urena’s wrist with a comebacker. DJ flow out to left. Gleyber Torres walked, and with Aaron Hicks at the plate, he took second on a wild pitch and then took third on a throwing error. Hicks ground out in the infield. Giancarlo Stanton had a rocket double off the left-field wall scoring Torres. Gio Urshela struck out, but the Yankees took the one-run lead.

It should be noted that number two in the lineup Aaron Judge has not been in the last few games. But when questioned, manager Aaron Boone said there is no reason to worry Judge is healthy are ready to start the season. However, it does make you wonder why he has been absent. Boone clarified during the game, saying that he was a bit under the weather but has cleared all the COVID protocols and will be ready.

German was back out in the second facing H.Castro, who popped out to Urshela. Wilson Ramos flew out to Hicks. A pitch hit Isaac Paredes. Akil Baddoo got a home run off German driving in two. That was the first run allowed by German in the spring. Reyes popped out to end the half. Jay Bruce at the bottom ground out to second. Frazier walked, Sanchez ground out into a double play. Detroit Tigers 2 New York Yankees 1.

Cameron led off the third and struck out. Candelario ground out first. Cabrera flew out to right with an excellent running catch by Frazier, giving German a quick 1-2-3 half. Brett Gardner, the Yankee batting average leader, led off the bottom and chopped out to first. LeMahieu was caught looking. Torres ground out for a 1-2-3 inning for Urena.

The fourth inning was led off by Schoop, who struck out on three pitches. H.Castro doubled on a ball that bounced into the stands. Ramos ground out, Castro went to third. Paredes struck out. Hicks walked to lead off the bottom. Stanton got a back-to-back walk, Urshela hit into a double play. Bruce walked, Frazier ground out to third, leaving men on the corners. Tigers 2 Yankees 1.

Baddoo struck out against reliever Chad Green. Reyes doubled to left. Cameron walked. Candelario ground out, but the runners advanced. Cabrera slammed a three-run home run knocking Green out of the game. Schoop faced sidearmer, Darren O’Day. Schoop popped out to Wade, but the Tigers picked up 3 more runs. At the bottom of the fifth, Sanchez struck out his third of the game. Gardner ground out. The Tigers had a pitching change bringing in Derek Holland to face Wade, who ground out. Tigers 5 Yankees 1.

Castro stuck out against Jonathan Loaisiga to start the sixth. Ramos ground out. Paredes ground out to short for a 1-2-3 half for Loaisiga. Estrada at the bottom was caught looking. Hicks had a long single to left and was replaced by Allen as a pinch-runner. Stanton struck out. Urshela struck out. Tigers 5 Yankees 1.

Michael King faced Baddoo at the seventh. Baddoo struck out. Greene struck out, and Cameron lined out. After the stretch, Alvarez struck out, Clint Frazier was called out on strikes, and Higashioka bounced back to Cisnero as the Yankee hitters remained quiet.

Luis Gil out for the eighth struck out Torkelson as he did Nunez. Dingler also stuck out for an impressive strikeout of the side for Luis Gil. At the bottom, LaMarre struck out; Wade bounced out. Estrada got his third home run of the spring. Allen also bounced out. Tigers 5 Yankees 2.

At the ninth, Reggie McClain, who was with the Phillies, last year took to the mound for the Yankees. Short made it to first as the ball got away from Brantly. Garneau at the plate Short stole second. Garneau walked. Paredes hit into a double play as Short went to third. Haase struck out to strand the runner. With last licks on the line for the New York Yankees, sent Seigler to the plate, he hit a very long out to left. Duran singled up the middle. Alvarez followed with a long out to right field. Florial flew out to left to end the game. Final score 5-2 as the New York Yankees only garnered 4 hits. The winning pitcher was Urena, and the loser was German.