New York Yankees Recap: Joey Gallo wins it for the Yankees against Seattle 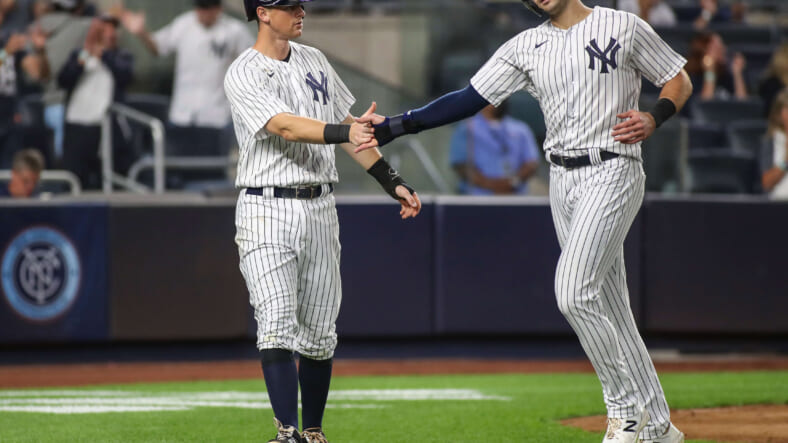 In the first inning with Cortes on the mound, JP Crawford walked on four pitches. Mitch Haniger hit an around-the-horn double play. Ty France singled to left field. Kyle Seager popped out to Higashioka for the final out of the scoreless half. At the bottom, DJ LeMahieu tapped back to the catcher. Anthony Rizzo flew out to the far center. Aaron Judge struck out to end the scoreless inning.

At the second, Abe Toro flew out to Davis in center. Luis Torrens flew out to Judge in right. Tom Murphy went down on strike as Cortes went 1-2-3 in the inning. At the bottom, Giancarlo Stanton singled to center. Joey Gallo doubled to right. Gleyber Torres flew out to right, but Stanton scored on the play. Rougie Odor walked. Higashioka, with two on and one out, popped out. Jonathan Davis flew out to the warning track in left field. No score.

Jarred Kelienic led off the third inning by singling.Â  Dylan Moore walked. Crawford was out on a sac bunt. Haniger got a sac fly to tie up the game. France popped out to Torres to end the inning, but the Mariners tied up the game. In the bottom of the third, LeMahieu singled on a line drive to center. Rizzo lined out to left. Judge lined out to right. Stanton struck out to end the inning. New York Yankees 1 Mariners 1.

In the fourth inning, Kyle Seager was against Cortes; he homered for the Mariners to take the lead. Abe Toro flew out to the right-center. Torrens flew out to center. Tom Murphy, with two outs, singled to left. Kelenic hit into the force out, but the Mariners took the led in the game. At the bottom, Gallo doubled to right. Torres ground out to end the inning. The final score after four innings was the Yankees 2 and the Mariners 2.

In the top of the seventh inning Jarred Kelenic hit a homer off Chad Green to right to give the Mariners the lead in the game. In the bottom with two on base and the game tied at two, Joey Gallo hit a three-run homer to right field for his 26th home run of the season. New York Yankees 5 and the Seattle Mariners 3.

In the eighth inning, France doubled off a ball down the right-field line in the eighth inning that bounced off the wall. Seager went down on strikes. Toro got an infield single, with France moving to third. With men on corners and one out, Torrens hit into a double play to end the inning and leave two on base. At the bottom, Odor walkedâ€”Higashioka, who was 1 for 3 on the night, chopped back to first. Brett Gardner pinch-hitting for Davis popped out directly to first. LeMahieu ground out to second to end the inning. New York Yankees 5 Seattle Mariners 3.

At the top of the ninth with Yankee closer Aroldis Chapman on the mound, Tom Murphy ground out to third with a tremendous scoop by Rizzo at first. Kelenic walked. A wild pitch advanced Kelenic to second. Cal Raleigh pinch-hitting for Moore struck out with Seattle down to its final out. Crawford singled to Torres, who had no play. With men on the corners and two outs, Mitch Haniger took to the plate with 25 home runs. Haniger flew out to Gallo in left for the Yankee win.

The final score was the New York Yankees 5 and the Seattle Mariners 3. The winning pitcher was Chad Green, and the loser was Paul Sewald. Aroldis Chapman got his 23rd save of the season as shaky as it was.