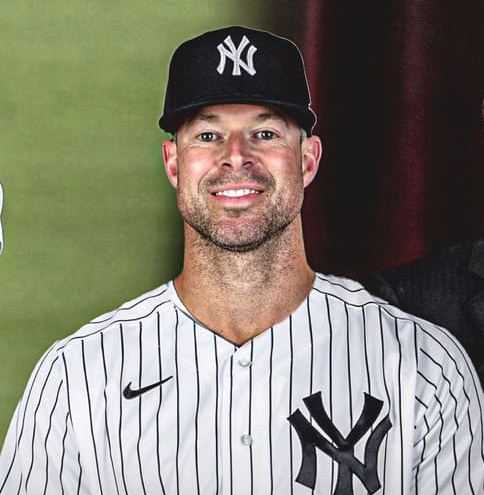 DJ LeMahieu led off the first inning with a single. Luke Voit hit into a double play for two outs in the inning. Aaron Judge singled to right field. Gio Urshela struck out to end the half. At the bottom against Corey Kluber, Willie Calhoun struck out. Nick Solak went down looking. Nate Lowe went down for a 1-2-3 inning for Kluber. No score.

Gleyber Torres off the Covid list hit a single to right. Miguel Andujar hit into a double play. Brett Gardner ground out to first to end the half. At the bottom against Kluber, Adolis Garcia led off the bottom by striking out. Joey Gallo popped out to Gardner in the center. Khris Davis ground out for another 1-2-3 inning for Kluber. No score.

Kyle Higashioka led off the third inning by grounding out. Ryan LaMarre ground out but immediately grabbed his hamstring. DJ LeMahieu ground out as the Yankees went down in order and apparently had another injured player. Isiah Kiner-Falefa led off the bottom by flying out to Wade. Charlie Culberson walked. Jose Trevino struck out. Willie Calhoun flew out to LeMahieu to end the inning with no score.

Luke Voit led off the fourth, and he struck out swinging. Aaron Judge ground out to short. Gio Urshela ground out for Yang’s eight Yankee put down in a row. At the bottom Nick Solak by striking out. Lowe flew out to Wade in far-right. Garcia skied one to center field for another quick inning for Kluber. No score.

Gleyber Torres led off the fifth inning by walking. Miguel Andujar hit into another double play for the Yankees’ 45th double play of the season. Bret Gardner flew out to center. Joey Gallo took to the place in the bottom of the fifth and went down looking for Kluber’s sixth strikeout of the game. Davis was a struck-out victim number seven. Kiner-Falefa ground out for another 1-2-3 inning for Kluber. No score.

Kyle Higashioka in the sixth walked to start the inning. Tyler Wade had an RBI triple to the right-field wall driving in Higashioka for the Yankees’ first run of the game. LeMahieu had a sac fly to far left, scoring Wade from third. Voit walked. Judge faced the new pitcher Brett Martin, and he struck out swinging. Urshela struck out but the New York Yankees picked up two runs in the inning. At the bottom of the sixth, Kluber kept the Rangers scoreless.

The seventh for the New York Yankees was scoreless. At the bottom, Gallo ground out. Davis ground out to Urshela.Â  Kiner-Falefa flew out to Wade in right field. Corey Kluber was just three outs away from a no-hitter. New York Yankees 2, Rangers 0.

Voit led off the ninth and went down swinging. Judge flew out to center. Urshela flew out to center. At the bottom, for the first time in 2021, a Yankees pitcher took to the mound to pitch a complete game for the Yankees and a possible no-hitter. Culberson ground out to second. David Dahl pinch-hitting for Trevino flew out to Wade in right. With only one out for no-hitter, Kluber faced Calhoun, who ground out for the no-hitter for Corey Kluber; it was a game for the history books.

Final score New York Yankees 2 and the Texas Rangers 0. The no-hitter win went to Corey Kluber, and the loser was Hyeon-Jong Yang.

How are you grading Kayâ€™s call? I thought it was great.