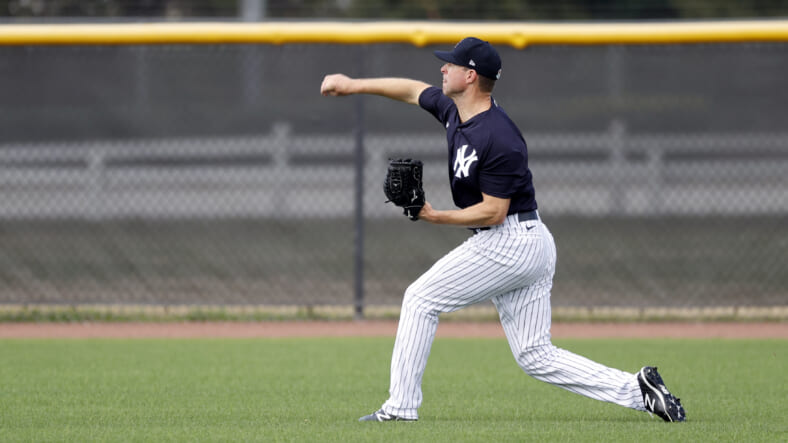 The New York Yankees were in Clearwater, Florida, today taking on the Philadelphia Phillies. Corey Kluber started for the Yankees and Zack Wheeler for the Phillies. It was 84 degrees and cloudy at game time. The Yankees lost the game 6-2.

Zack Wheeler took to the mound to face DJ LeMahieu. DJ ground out to second. Gleyber Torres walked on eight pitches. Aaron Hicks was called out on strikes. Jay Bruce in for Luke Voit that is having knee surgery, but his at-bat couldn’t be completed at Gleyber Torres was caught stealing second base for the final out of the half. Corey Kluber took the mound at the bottom facing Andrew McCutchen; McCutchen singled to short. Rhys Hoskins flew out, and Bryce Harper struck out, Bohm walked, Gregorious ground out to end the inning.

Jay Bruce led off the top of the second; he doubled to centerfield. Clint Frazier ground out to second, Gary Sanchez struck out. Mike Tauchman struck out on Wheeler’s eight-pitch of the at-bat. Segura faced Kluber at the bottom and walked. Miller struck out, and Herrera struck out swinging. Knapp flew out to Aaron Hicks for the final out of the inning. No score.

Austin Wells led off the third for the Yankees; he was called out on strikes. Wade ground out to Gregorius, and DJ ground out to end the half. At the bottom, McCutchen struck out, Hoskins singled, and Harper walked for two on and no outs. Bohm singled to load the bases. Gregorius was hit by a pitch driving in Hoskins as Kluber lacked control. Segura had a sac fly that scored Harper. Miller walked, reloading the bases, and Kluber was pulled from the game in favor of Brooks Kriske. Herrera ground out, leaving the bases filled with Phillies. Phillies 2 Yankees 0.

Vince Velasquez took over the pitching for the Phillies at the fourth. Gleyber Torres struck out, Aaron Hicks flew out to right, and Bruce struck out as Phillies’ pitching confused the Yankee hitters. The New York Yankees brought Kluber back out at the bottom to build up his pitch count. This was his last game of the spring, and the Yankees would like to see him get up to 80-85 pitches. In a puzzling move, they only allowed him to face two batters, Knapp flew out, and McCutchen stuck out, then replaced him with Nick Nelson. Hoskins struck swinging for the final out.

Frazier led off the fifth; he singled with a line drive to center. Sanchez struck out swinging, Frazier stole second and took third on a Philly throwing error. LaMarre had a sac fly scoring Frazier and getting the Yankees on the board. Austin Wells singled, LeMahieu flew out to end the inning, but the Yankees picked up a run Phillies 2 Yankees 1. Bryce Harper against Nelson ground out to short. Bohm doubled. Gregorius ground out to second. Maton running for Harper moved to third. Segura ground out to strand Maton at third. Phillies 2 Yankees 1.

Archie Bradley started the seventh against Gary Sanchez, who stuck out and was 0-3 for the day. LaMarre singled, and Josh Breaux struck out, and LaMarre was caught stealing to end the half. Luis Cessa was out for the bottom; he stuck out Quinn. Duran singled. Vierling ground into a forceout. Maton doubled Vierling scored. Luis Garcia doubled driving in Maton. Stot singled driving in Garcia. Miller struck out, but the Phillies picked up 3 runs. Phillies 5 Yankees 1.

The top of the eighth saw Tyler Wade leading off for the Yankees; he doubled. Wade went to third on a passed ball. Hoy Jun Park struck out. Armando Alvarez struck out, and Milone struck out, wasting Wade’s double. At the bottom prospect, Luis Medina took over the pitching for the Yankees. Medina ground out Marchan. Rojas ground out, and Quinn walked and stole second. Duran singled driving in Quinn but was called out at second. Phillies 6 Yankees 1.

With last licks on the line for the New York Yankees, Thairo Estrada led off homering to far left-center. Estevan Florial flew out. Max McDowell was called out on strikes and LaMarre struck out ending the game. The final score was Phillies 6 and the Yankees 2. The winning pitcher was Zack Wheeler and the loser Corey Kluber.