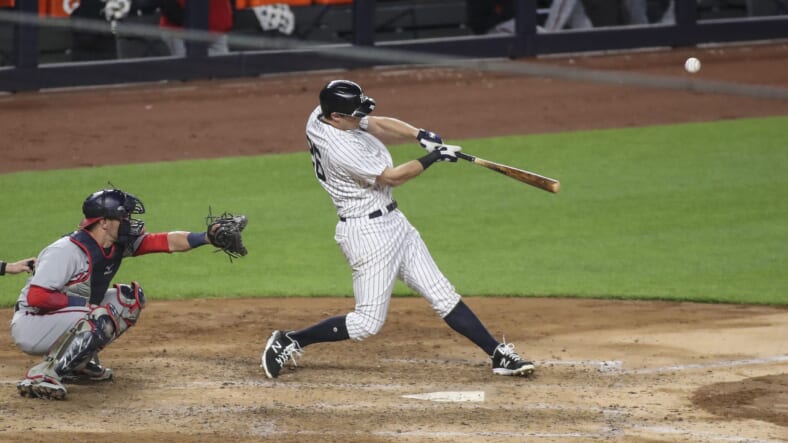 The New York Yankees entered tonight’s game in a very unusual situation. That situation was to win their 11th straight game, which has not been done since 1985. The Yankees have won their last 9 series and their 10th game in a row going 26-8 since July 17th. No team in baseball has had two teams with a 9-1 record or better face each other since 1901. The Yankees would not have an easy task with the Atlant Braves starter Charlie Morton on the mound. The Yankees had Andrew Heaney starting for them. The Yankees got their 11th straight win 5-4 over the Braves. It was the 10th series win. the first time that has been done since 1954.

Giancarlo Stanton led off the second inning by homering to right-center to bring the Yankees one run closer. Gary Sanchez struck out swinging. Rougie Odor went down swinging, as did Andrew Velazquez to end the half. At the bottom, Adam Duvall led off and struck out. Joc Pederson went down swinging. Charlie Morton gave Heaney a strikeout of the side. Braves 2 Yankees 1.

The third inning was led off by Andrew Heaney, who went down looking. LeMahieu struck out for Morton’s sixth strikeout. Rizzo flew out to center to end the half. At the bottom, Albies hit the first pitch he saw for an out to right field. Soler ground out to Odor at third. Freeman popped out to left-center. Braves 2 Yankees 1.

Aaron Judge led off the fourth inning by leading off with a double down the right-field line. Gallo went down looking. Stanton that homered in the second ground out to the infield with Judge moving to third base. Sanchez singled up the middle-scoring Judge to tie the game at 2. Odor chopped out to first to end the half, but the Yankees tied the game. At the bottom, Riley led off by singling to short. Swanson swung out swinging. d’Arnaud singled to left. Duvall, with two on and one out, popped out to Rizzo in right field territory. Pederson was hit by a pitch but swung for the final out of the inning. New York Yankees 2 Braves 2.

The fifth inning was led off by Andrew Velazquez, who struck out. Then, DJ LeMahieu hit a two-run homer to deep left. At the end of the fifth inning, the New York Yankees 4 and the Atlanta Braves 3.Â  The sixth inning was scoreless for both teams. Clay Holmes pitched an excellent sixth for the Yankees. In the seventh inning, the Yankees picked up another run with Rougie Odor’s solo homer, which turned out to be the winning run for the Yankees. . Chad Green in for the Yankees had a scoreless seventh. New York Yankees 5 the Atlanta Braves 3.

The top of the eighth inning was scoreless for the Yankees. At the bottom of the eighth, Chad Green struck out Soler. Freeman singled to left field out of Gallo’s reach. Riley singled but tried to stretch it to a double and was called out at second. Freeman took third base. Swanson ground out to end the inning. New York Yankees 5 Atlanta Braves 3.

At the top of the ninth inning, Gary Sanchez was called out on strikes. Odor walked. Velazquez struck out swinging. Luke Voit pinch hit for Chad Green and walked on four pitches. DJ LeMahieu popped out to Swanson at short to end the half-inning.

At the bottom of the inning closer, Aroldis Chapman came to close it out for the Yankees. Facing him was d’Arnaud, who ground out to Velazquez. Duvall singled up the middle. Heredia pinch-hitting for Pederson went down on a Chapman slider, two outs. Ehire Adrianza pinch-hit for pitcher Will Smith, he walked. With two on and two outs, the dangerous Ozzie Albies came to the plate as the winning run and singled to left to load the bases with Braves. Then with the bases loaded and two outs Jorge Soler with sweat dripping from Chapman’s cap, walked, bringing in the fourth run and knocking Chapman out of the game.

Wandy Peralta came in to get the save for the Yankees. Peralta, with the bases, still loaded, faced Freddie Freeman with the game on the line, the winning streak on the line. Freeman flew out to Gallo in left for the Yankee win and the 11th straight win for the first time since 1985. The final score was the New York Yankees 5 and the Atlanta Braves 4. The winning pitcher was Clay Holmes, and the loser was Charlie Morton. The save went to Wandy Peralta (5).