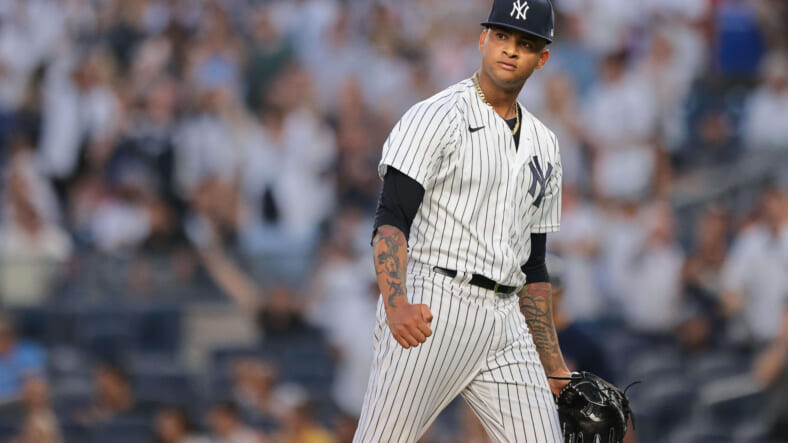 After pounding the Cleveland Indians last night in an 8-0 shut out the New York Yankees hoped to continue their powerful play by getting back their home advantage in the wild card and beating the Indians again to take the series. The Yankees had pitching sensation Luis Gill on the mound facing the Indians Aaron Civale. Gil was not good and the bullpen was sensationally worse. The Yankees lost 11-3.

Gill faced Myles Straw leading off for the Indians, who struck out for Gil’s first game strikeout. Oscar Mercado jumped on the first pitch for a double down the left-field line. Jose Ramirez ground out with Mercado moving to third. Franmil Reyes struck out to strand one. At the bottom, DJ LeMahieu led off for the Yankees and doubled to center. A pitch hit Luke Voit. With two on and no outs, Aaron Judge hit into a double play as DJ moved to third base. Stanton, with two outs and one on, lined out to right to end the inning. No score.

Harold Ramirez struck out. Yu Chang homered into the left-field stands. Owen Miller struck out. Austin Hedges flew out to right, but the Indians picked up a run. At the bottom, Joey Gallo led off by popping out to third. Gleyber Torres singled up the middle. Gary Sanchez went down looking. Brett Gardner at the plate Torres was caught stealing to end the inning. Cleveland Indians 1 Yankees 0.

To open the third inning, Andres Gimenez was at the plate and singled to left. Straw ground out with Gimenez moving to second. Mercado flew out to Gallo. Ramirez walked. Reyes, with two on and two outs, popped out to Urshela, stranding two. Brett Gardner led off the bottom of the third by striking out swinging. Gio Urshela popped out to second. LeMahieu flew out to right. Indians 1 Yankees 0.

The fourth inning was led off by H. Ramirez, who walked. Chang had an infield pop out. Miller walked. Hedges struck out swinging. Gimenez struck out. At the bottom, Voit was called out on strikes. Aaron Judge got a towering out to right. Stanton flew out to the warning track in right. Indians 1 Yankees 0.

The fifth inning was led off by Myles Straw, who lined out to Judge in right. Mercado popped out to Sanchez, but Sanchez dropped the ball; he ended up getting hit by a pitch. Ramirez walked. Reyes faced the new Yankee pitcher Albert Abreu and got an RBI double driving in Mercado with two on and one out. Ramirez was hit by a pitch for the second Indian hit by a pitch in the inning. Chang got a two-run double to right. Miller got an RBI single as the Indians were pouring it on. Hedges popped out to Sanchez. Gimenez, the 9th batter of the inning, hit a 3 run homer into the right-field stands. Straw ground out to finally end the inning that saw the Indians score 7 runs.

At the bottom of the fifth, Tyler Wade led off by striking out. Torres ground out to third. Sanchez singled to let field. Gardner lined out directly to Miller at second. Cleveland Indians 8 New York Yankees zero.

Mercado led off the sixth inning struck out. Ramirez doubled when LeMahieu tried to field his ground out but threw offline to a scoop up that Voit couldn’t make. Next up was Reyes, who hit a two-run homer into left. Ramirez flew out to left. Chang went down on strikes as the Indians tacked on another two runs. At the bottom,Â  Urshela led off and ground out to the pitcher. LeMahieu singled. Voit walked. Aaron Judge hit into his second double play of the game to end the inning. Indians 10 Yankees 0.

Miller led off the seventh by singling up the middle. Hedges flew out to center. Gimenez struck out. Straw singled, moving Miller to third. Mercado flew out to right. At the bottom, Stanton homered into the bullpen to put the Yankees on the board. Wade struck out. Torres popped out to first. Sanchez singled to left.Â  Gardner ground out to end the inning. IndiansÂ  10 New York Yankees 1.

The eighth inning was led off by Ramirez, who tacked on another homer. Reyes singled. Ramirez struck out. Chang flew out to left, and Miller struck out swinging. At the bottom Urshela ground out to short. LeMehieu walked. Voit hit a two-run homer just inside the left-field foul pole. Judge walked, Stanton flew out to deep center. Blake Parker was brought in to face the lefty, Wade. Wade got a single up the middle. Torres popped out to end the inning. Indians 11 Yankees 3.

Austin Hedges led off the top of the ninth against new Yankee pitcher Joely Rodriguez and ground back to J-Rod. Gimenez went down on strikes. Straw struck out. The Yankees entered the bottom of the inning with the impossible task of scoring at least 8 runs to tie the game and force it into extras. Gary Sanchez facing Emmanuel Clase, flew out to right. Gardner walked. Urshela struck out swinging. LeMahieu ground out to first to end the game.

The final score was the Cleveland Indians 11 and the New York Yankees 3. The winning pitcher was Aaron Civale, and the loser was Luis Gil.