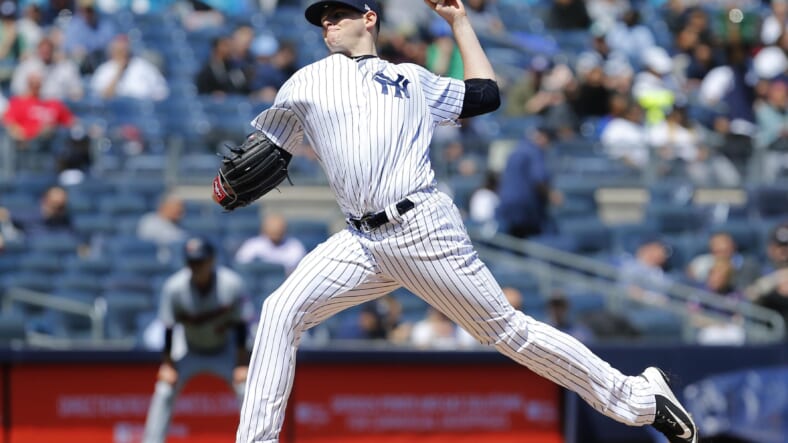 The New York Yankees and starter Jordan Montgomery have a daunting task this evening; they face the Baltimore Orioles that won all three of its opening weekend games. This article will cause me to get a lot of emails as it will irritate many Yankee fans, (I won’t be able to answer most of them) but at the same time, it highlights a problem that the Yankees are experiencing, they can’ hit the ball.

To be fair, the Baltimore Orioles faced the lowly Boston Red Sox, who lost all three of their games over the weekend. The Yankees, on the other hand, faced the Toronto Blue Jays, which has a young and hard-hitting lineup. For the most part, the Yankee pitching over the three games was good to satisfactory, but the hitting is the story here; there was none.

Looking at the Yankee series and the Baltimore series, there are glowing differences. The Orioles had 18 runs, and they did it without a single home run, meaning they are playing really good small ball. The Yankees’ 8 runs were accomplished with the help of 2 home runs, which means their small ball produced only 6 runs. When you don’t hit consistently, you leave many on base. The Yankees leftÂ  27 men on base in the series, going 4 or 24 with runners in scoring position.

I have no idea how to solve this, it is far above my pay grade, but I know that the lack of hitting must be solved; you don’t win games scoring 2.6 runs per game. Here’s a brief look at some of the hitting problems that are apparent. The biggest one is that the two power hitters, Aaron Judge, and Giancarlo Stanton, have no home runs and are hitting on average .107. Next up is the controversial number three-hitter, Aaron Hicks; he is hitting .083. Usually, the most patient hitter that walks a lot leads the team with 7 strikeouts. Other than Clint Frazier and Brett Gardner, the rest of the players aren’t hitting either. The Yankees ranked 18th in batting average (.218) for the spring. The Orioles ranked number 4 (.304).

Again, you’re going to say, hey, this is only one series. But the point is that it is not just one series. The problem not only existed this weekend but in the last 12 games of the spring as well. In the 2019 ALCS, the New York Yankees only scored 3.5 runs per game in their loss to the Houston Astros. Last season the Yankees fell seven games behind the Tampa Bay Rays due to a combination of not great pitching and long stretches of not hitting. They did somewhat better in the postseason against the Rays scoring 4.8 runs per game. Most industry sources say you need 5 runs per game to win consistently.

I don’t know if it’s hitting coach Marcus Thames, the players themselves, manager Boone or who it is, but this has got to change if the Yankees will reach their full potential. I am not being critical for the sake of being critical. I want the Yankees to improve so that I can see them win that elusive 28th World Championship before I die. If I have to wait another 11 years, I will be 86. I am a lifelong lover of the Yankees and will remain so, even if they don’t win.

Tonight at 6:35 pm, the New York Yankees will meet the Baltimore Orioles at Yankee Stadium. Jordan Montgomery (ERA 0.90) will face the Orioles Jorge Lopez. Montgomery making his season debut tonight is two years out from his Tommy John surgery, and believes he is poised to become one of the best Yankee pitchers this season. Lopez had a 2.75 ERA over 6 spring training games. Montgomery will have to be very careful with Cedric Mullins, who hit .692 over the weekend. The game will be televised in Baltimore and in the New York area on the YES Network.