New York Yankees News/Rumors: Yankees could lose big in the off-season too 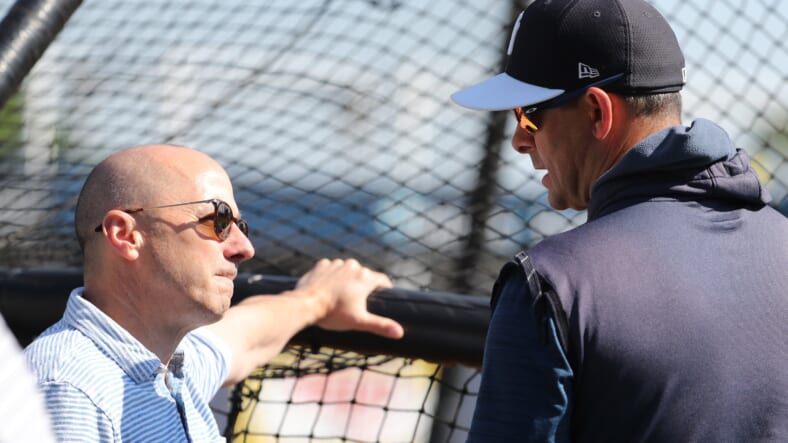 The New York Yankees lost big in the regular shortened coronavirus season. They lost up against the Tampa Bay Rays 2-8 during the season. They lost big when they couldn’t win the American League East to the Rays. The biggest loss was when they couldn’t capture a win in the ALCS and go on to a World Series appearance. This is the New York Yankees; if they don’t win a World Series in a season, they consider their season a failure.

The World Series is about to be over, and when it is, the Yankees could again lose very big. The New York Yankees have 17 free agents in just a few days. Some of the big names include DJ LeMahieu, Masahiro Tanaka, James Paxton, J.A. Happ, among a dozen others. Giancarlo Stanton, Zack Britton, and Brett Gardner have options that could affect their team’s return. Add to that the Yankees could lose their bench coach Carlos Mendoza and their hitting coach Marcus Thames. The weeks ahead will tell how this all pans out.

As far as the free agents are concerned, the Yankees will have to double or more DJ LeMahieu’s yearly salary to keep him around. He will probably also want a longer contract to provide him with future career security. This year of no income and increasing responsibilities upcoming, if LeMahieu is too demanding, it is not out of the question that they could let him walk.

Last offseason, the Yankees spent big and landed one of the best pitchers in baseball, Gerrit Cole; now, with all the pitchers reaching free agency, the Yankees may have to spend big again on someone like Trevor Bauer. The other option is to keep some of the free agents and depend on the up and coming prospects to anchor the rotation. The Yankee brass realizes they must do something, or they will find themselves falling short again. If they keep any of their free-agent pitchers, it will probably be the somewhat dependable Masahiro Tanaka. Tanaka has not tipped his hat as to if he wants to return to the Yankees. In Tweets, he has said he liked pitching for the Yankees but has also hinted he may return to Japan to finish his career.

So far as the other free-agent pitchers. There is a possibility that the Yankees may make some type of offer to keep James Paxton on the payroll. The question in that deal would be how much of a discount he would sign for due to his reoccurring health issues. Another big loss to the Yankees could come if they don’t take back 2019, most winning pitcher Domingo German, who was suspended this season for domestic violence. General Operating Partner Hal Steinbrenner has openly stated that German would have to prove to him that he is a changed man. If history means anything, they will probably take back German, considering what they did with Aroldis Chapman, whose case was worse.

The bottom line is that with Luis Severino coming back midseason and keeping Tanaka and accepting the return of German, it may release the Yankees from spending big money for a premium pitcher. It would produce a lineup similar to this: Cole, Severino, German, and Tanaka, which would leave them with a bevy of Montgomery and prospects to fill the remaining slot in the rotation.

In recent areas of losses, the Yankees could endure because Marcus Thames, the present hitting coach, has been interviewed for the new Detroit Tiger’s manager’s position. According to reports, he is presently on the shortlist for the job. More recently, Yankee bench coach Carlos Mendoza, Boone’s right-hand man, is rumored about for managerial jobs for both the Boston Red Sox and the Detroit Tigers.

The Red Sox got rid of Alex Cora when he was implicated in the Houston Astros cheating scandal. They replace him with Ron Roenicke, the result was a season where the team was a mess and ended up having one of their worst years in two decades. They ended up last in the AL East, losing a third more games than they won. The Detroit Tiger’s vacancy resulted when Ron Gardenhire abruptly retired with a week left to the season. Both teams will need a strong leader to improve their teams.

The remaining free agents they might lose are in the minor league system. And would likely not have a serious impact on the team regardless of what they decide. The New York Yankees will surely not lose all of these positions, but some of them could produce a very different looking team for the 2021 season.