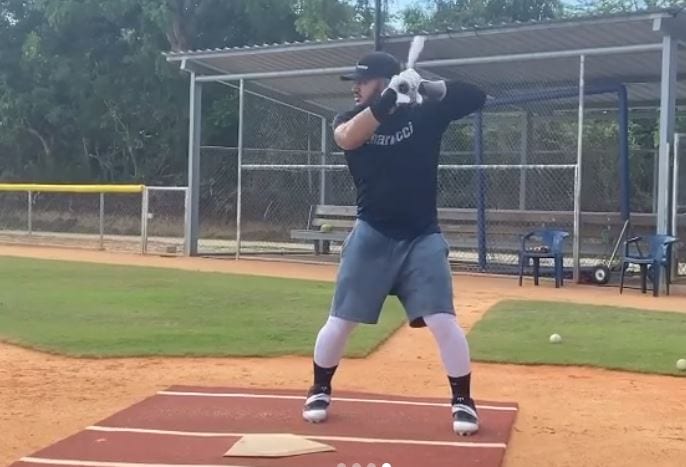 The New York Yankees coming off another disappointing season, are spending the offseason looking for ways to improve the team. They have to deal with a multitude of players that have become free agents and some with options. They also have some significant decisions to make with players that didn’t perform as well as the Yankees would have liked. For Yankee fans, they want the team to get good enough to win another World Championship. With all of that in mind, many fans wonder if the amazing player they have heard about, Jasson Dominguez, will be ready to join the team this season. Sadly, for the time being, the answer is no.

There is no question that the young man that will turn 18 on February 2nd has the talent to play at the Stadium. The question is it right to push the young man that hard. If you asked the Dominican star, he would probably say yes. But the New York Yankees have a process not only to build a baseball player but to build a Yankee. There is precedent for debuting a player as young as Jasson. The Youngest ever was Joe Nuxhall; he was a 15-year-old pitcher for the Cinncinati Reds back in n1944. There have been a few sixteen-year-olds and even more seventeen and eighteen-year-olds. All tolled, there have been more than 20 teenagers that have made the opening day lineup.

Some of these youngsters excelled and some not so much. One became a Major League manager, one, Bobby Doerr, the Red Sox second baseman, became a baseball Hall of Famer. The Yankees have never been big on starting kids young. Mickey Mantle was the youngest ever Yankee in the modern era (1900). We all know how that baseball career turned out. Mantle started with the Yankees at the age of 19, 179 days. The youngest pitcher was Cornelius Joseph Brady at the age of 18. More recently, Derek Jeter debuted with the Yankees at the age of 20.

To fully understand the young Jasson Dominguez, you need to start at the beginning. Jason was born in Valverde Province, the Dominican RepublicÂ Â Â  to Felix Dominguez and his mother Dorca Gonzalez. You could say that Jasson was a Yankee fan from birth, as his father was a big time Yankee fan and named his son after Yankee slugger Jason Giambi. The young Jasson accompanied his father to the grocery store, where they had a television to watch New York Yankee games.

By the age of eight, with his father’s nurturing he was actively playing baseball and working with different academies before he signed on with noted buscone Ivan Noboa at age 13. According to Yankees Magazine, Dominguez and Noboa made bets on each other. Dominguez saw Noboaâ€™s track record, the Major Leaguers that he had produced, including Nomar Mazara, who earned a then-record $5 million bonus from the Rangers in 2011. He was willing to commit a percentage of his future earnings in exchange for years of training from Noboa and his team of instructors. On the other side, Noboa saw the same things that American teamsâ€™ scouts would notice over the next few years. A work ethic and an attitude that, when combined with a body that was advanced far beyond most kids his age, projected to something special enough to be worth one of the three or four spots available at the academy in any given year.

â€œHe wasnâ€™t fully developed,â€ Noboa says, with GonzÃ¡lez translating. â€œYou could see that he had the hitting ability, but he didnâ€™t have the power. And he was only like 5-foot-4 when I first met him. You could project him, guess that he was going to develop into what he did, obviously with time and work.â€

Under Noboa’s direction Dominguez would wake up between 5 a.m. and 6 a.m. every day and begin his demanding routine. Mornings were for defense and conditioning, then batting practice before lunch. After some time cleaning the house and a quick nap, heâ€™d head to the gym around 2 p.m. for a full workout. Sometimes heâ€™d add in a second afternoon hitting session. School? That was on Saturday.

Within a year or so, Dominguez was racing toward the top of the class, drawing all kinds of attention around the island. Every team was sending scouts, including the New York Yankees. Donny Rowland runs the Yankeesâ€™ international scouting department, and, in concert with the player development staff in Tampa and the executives in New York. Rowland had been getting amazing reports on the young Jasson Dominguez. The Yankees’ affinity for Jasson Dominguez can be summed up by his cost. Rarely does a 16-year-old Latin American player demand $5 million, let alone get it. On July 2, 2019 Dominguez signed a $5.1 million contract with the Yankees.

We are talking about a player that can play the outfield, centerfield in particular, pitch and catch. Add to that the he regularly hits homers over the fences and beyond the trees of the Yankee training academy. Plus he is a switch-hitter. Also when you look at Dominguez you don’t see a boy of 17, you see a monster of a man that looks ten years older and in the prime of his career.

Before siging the contact with the Yankees, Jasson Dominguez said this:

â€œOn July 1, it was only rumors,â€ Jasson says some six months later. â€œNothing was a fact. July 3, it was a fact. â€¦ I had a goal, I worked for my goal, I reached my goal. But thatâ€™s in the past. I need to set up new goals.

â€œBut also, I was thinking, â€˜This is the time. Iâ€™m here. Iâ€™m doing it.â€™ And I felt like I had proved to other people that might have their doubts that I could do the things that I knew that I could do.â€

All the scouts include Rowland were seeing the likes of Mickey Mantle and Mike Trout in Dominguez. And that became even more evident when Jasson arrived at the Yankees academy in Boca Chica, DR.Â  That was when he was only 16 years old. Since then an already muscular young man has turned into a monster of a man, far beyond his years. He has grown seven inches sinced he work with Noboa, and put on thirty pound of muscle, he is 5′ 10″ and 195 pounds.

When you look at Dominguez the first thing you see is his broad shoulders, massive biceps and thighs the size of Volkswagens. Then as he talks you are brought back down to reality when you see the braces on his teeth. Teeth don’t straigten quickly and either does the making of a New York Yankee. There is a process. Whether you call Jasson the “Martian,” due to his out of this world talent, or “Monster” because his massive build, the reality is that he is still a kid.

The process of becoming a Yankee involves constant work outs. Hitting instruction and fielding instruction, but it also involves classwork. Classwork on how to conduct yourself and how to be a Yankees and represent the tradition of the team.

â€œI think thereâ€™s just a sense of urgency thatâ€™s coming with his work,â€ says Andrew Wright, the director of the Yankeesâ€™ Dominican academy. â€œItâ€™s go time now. I know you talk about that clock, that heâ€™s now got to think about preparing himself for a long career, but every day has to matter. He came in understanding that, but I think you can really see it now. Heâ€™s competitive. And heâ€™s also a 17-year-old kid. Youâ€™ve got to understand that he has to be afforded the same perspective that you would give any other 17-year-old. I think thatâ€™s one of the things that we really have to be cognizant of, as the people who are trying to guide him through his first years in professional baseball.â€

Jasson is a Christian. In his Instagram bio, his first descriptive word of himself is â€œChristian,â€ followed by the hashtag #GodFirst with prayer emoji hands. He is a young man on a mission to become the best baseball player ever. Whether he makes his major league debut this year of next, depends on his progress. What might be telling, is if the Yankees invite him to summer camp in Tampa at George M. Steinbrenner Field, if they do that might be a path to playing in the minors with the Tampa A team. If that doesn’t happen he will likely spend another year at the Yankee Academy in the Dominican Republic. Whichever the case the Yankees may just have a generational baseball star in the making.