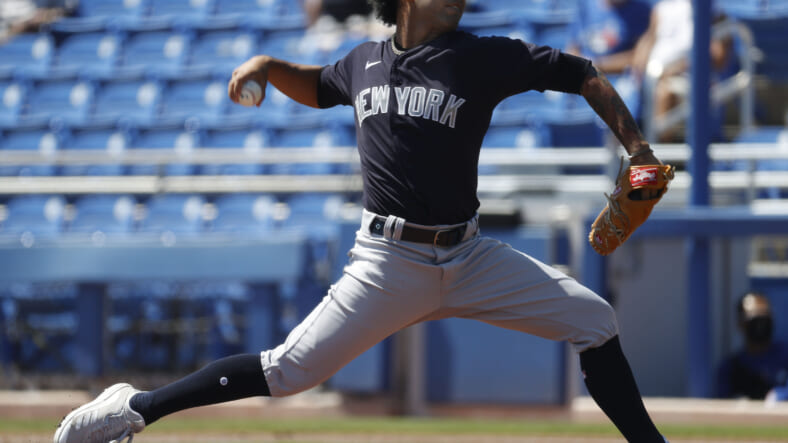 The New York Yankees have removed one question from fan’s minds about who would be the anchor of the starting pitching rotation. It’s not going to be Deivi Garcia; he has been demoted to Scranton Wilkes/Barre. Garcia was considered an option for the fifth spot in the starting rotation. Although he was a consideration, with Domingo German being the best pitcher in spring training, it was doubtful that Garcia would make the 26 man roster and that fifth spot would go to German. With Garcia’s demotion, Domingo German now has a lock to anchor the rotation.

As I predicted, Garcia’s performance in the game against the Blue Jays sealed the deal. He was just terrible; he had no command of his pitches, giving up 7 hits and 4 runs while walking two in just three innings of work. He certainly did himself no favors in the competition for the anchor job. Now just two days later, the Yankees have responded with the demotion. However, for Deivi fans, not to worry. It will be a long 162 game season after a short 60 game season last year. The New York Yankees are going to need plenty of pitchers to get through the season. You can be sure you will see Garcia on the mound at some point.

Angels visiting clubhouse manager Brian â€œBubbaâ€ Hawkins sued MLB and the Los Angels for defamation. The suit involved the use of unauthorized substances on baseballs. The suit was dismissed this past January. But during a hearing Yankee ace, Gerrit Cole’s name was mentioned. It was brought out that Cole allegedly texted Hawkins about supplying with an unknown substance that could be used on baseballs. As far as this writer knows, Cole has never been contacted by authorities.

Last night at George M. Steinbrenner Field in Tampa, Cole faced the Toronto Blue Jays and pitched brilliantly for 5.2 innings, not allowing a run and giving up only 2 hits while striking out 5. After the game, he was questioned about the unknown substances:

â€œProbably not a whole lot of good is going to come from diving into that, so, {you} should just leave it alone.â€

Cole also wasn’t interested in talking about the leagueâ€™s plan to more closely watch what pitchers are putting on balls by using clubhouse monitors and advanced technology to see who might be cheating and what theyâ€™re using. He said that he had no thoughts on that.Â  Cole will be the Yankees Opening Day starter at Yankee Stadium when he will again face the Toronto Blue Jays next Thursday, April 1.

The New York Yankees are coming down to the wire on weeding out the players that will not be needed on the 26 man roster. Some have already been reassigned; the most recent announcement was the demotion of Deivi Garcia. Garcia joins fellow pitchers Kyle Barraclough and Asher Wojciechowski. Most likely following them will be Nestor Cortes Jr., Luis Garcia, and Nick Goody. Jhoulys Chacin pitches today against the Blue Jays; how he performs will determine his fate. It is still very up in the air on the remainder, Michael King, Lucas Luetge, Tyler Lyons, and Nick Nelson.

As far as position players are concerned, Socrates Brito and Ryan LaMarre have already been reassigned. The situation for hitters is far less clear. Rob Brantly and Andrew Velazquez will probably be the next to go. As of today, the situation with Jay Bruce, Darren Dietrich is unclear but not looking good. As far as looking good, that seems to be reserved right now for Mike Tauchman and Tyler Wade, even though Wade made back-to-back throwing errors last night.

The biggest question in the last ten days was whether Jay Bruce or Mike Tauchman would survive the cuts. While Bruce started the spring hot, he has cooled as Tauchman has shown his worth in the same time period. Although many thought the Yankees would move on from Tyler Wade, that is not likely with his speed and ability to play at so many positions.

The last New York Yankee game of the spring will be on Monday against Detroit. Corey Kluber will pitch Sunday’s game against the Phillies. Opening Day will be Thursday, April 1, against the Toronto Blue Jays with Gerrit Cole on the mound. Most likely, on Wednesday, the final 26 man roster will be announced.