New York Yankees News: 17 players could leave the Yankees – Find out who may stay 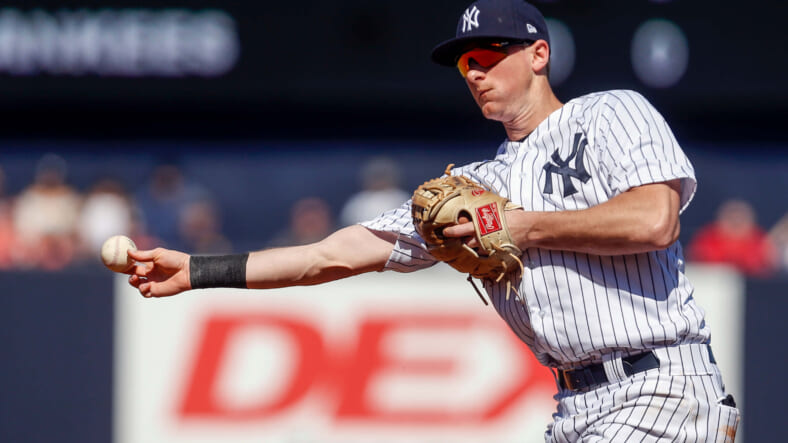 The New York Yankees are coming off of another disappointing season, being eliminated in the 2020 ALDS by the Tampa Bay Rays in five games. Now that the season is over, the Yankee organization will be looking at what went wrong and how to solve it before starting the 2021 baseball season.Â  Among those decisions to be made is what to do with seventeen Yankees that might leave the team during the offseason.

Next season, Giancarlo Stanton will be in the seventh year of his $325M contract and the fourth year as a Yankee. Stanton was the NL MVP in 2017. After that season, the Yankees took over his contract from the Miami Marlins. Next year he is due $29M. He has a no-trade clause in the contract. Also in the contract is an opt-out after the 2020 season.Â  The likelihood of that happened is the same as saying the Yankees will have no rainouts next season. Stanton, during his time with the Yankees, has been injured often. This season, when coming back from a hamstring injury, Stanton caught fire and was a Yankee star in the postseason. He had six home runs, driving in 13 and hitting .308. Stanton will be returning. 100%.

In 2019 the New York Yankees obtained DJ LeMahieu from the Colorado Rockies, signing him to a two-year $24M contract that is now over. During the two years, LeMahieu has been with the Yankees; he has been everything the Yankees could have wanted from a player. During the 2019 season, he won a Player of the Week award, a Player of the Month award, and at the end of the season, he won an AL Silver Slugger Award. He topped that off at the end of the 2020 season by winning the AL Batting Title, becoming the first player to win the coveted award in both leagues.Â  Now he is a free agent.

The New York Yankees will surely want to retain LeMahieu to lead off their lineup. With his performance, the Yankees will not get the bargain that got with his last contract. The Yankees’ only question will be how long his new contract will be and for how many dollars. Because of his age, the contract offered will probably be between four and six years, and most likely at a 50% or more raise over his present contract.Â  Return projection 90%.

Brett Gardner is a free agent again this season. Last year after a fantastic year, the Yankees signed him to a two-year $20M with a $2M signing bonus that includes a club option for the 2021 season.Â  If the team doesn’t exercise that option, they can buy out his contract for $2.5M. Gardner, this year did not have the season he did last year.Â  He hit .223 with only 5 home runs, which is an equivalent of 13 home runs in a normal season, compared to his 28 home runs last year. Obviously that is a sharp decline in power. Gardner still performs well in the field and on the base paths. He stole a home run off of Randy Arozarena in the ALDS.

The question of Gardner’s return is complicated. If it was based purely on his performance, he probably wouldn’t be returning. However, there is more to Gardner than just performance in the game. He is the heart and soul of the team. He is a clubhouse leader and mentor to younger players. Gardner is the only holdover from the 2009 World Series team and the longest-tenured Yankee as well as being one of the most popular Yankees. The Yankees will have to answer if it is worth an investment of $7.5M to keep him around? Garder has made it known that he wants to retire from baseball as a Yankee and feels he can still contribute. Probability of return 70%.

Masahiro Tanaka is at the end of his seven-year $155M contract and is a free agent for the first time since being in the United States.Â  He was signed in 2014 to be the new New York Yankee ace. That never really materialized, except in his first season with the Yankees. An elbow injury that should have had Tommy John surgery didn’t. Tanaka played through it, and it defined his time with the Yankees. His last two seasons have been his poorest with the Yankees, with this season, being his worst, 3-3. Tanaka also lost both of his postseason starts.

Tanaka has said he loves pitching in New York. However, after his last loss, he sent a heartfelt message to Yankee fans thanking them for their support and calling them the best fans in the world. Considering the end of his contract, the message hinted that he might not be back. Tanaka is still revered as an icon in his home in Japan. Might Tanaka finish out his career in his beloved Japan? Tanaka is still relatively young at 31. He made $23M this season. If the Yankees want him back, he will not earn close to that, and it will be a short contract. The question is, will Tanaka accept a sharply discounted contract, test the free-agent market, or go back to Japan. Probability of return 50%.

J.A. Happ started with the Yankees, coming from the Blue Jays halfway through the 2018 season.Â  He was a godsend for the Yankees going 7-0 in the last games of the season. He did not pitch as well in 2019 but still had a respectable 12-8 season. He hasn’t fared as well in 2020, going 2-2 but with a nice 3.47 ERA. He pitched only in relief in the postseason, a game the Yankees lost while Happ gave up four earned runs.

Happ’s contract that ran out at the end of the seasonÂ  and was vested for the 2021 season if he pitched 165 innings or started 27 games.Â  The shortened MLB season negated that vesting, and he is a free agent. Happ has been at odds with management at times. Back at the end of August, General Manager Brian Cashman lashed out at Happ for his performance. Later that day, Happ pitched 7 1/3 shut out innings for a Yankee win. Considering that Domingo German will be back with the Yankees and Luis Severino as some point, it is not likely the Yankees will offer Happ much to return. He earned $17M this seasonâ€”the probability of return 25%.

In 2019 James Paxton who came from the Seattle Mariners was the number two pitcher for the Yankees going 15-6 in 29Â  starts.Â  During the offseason, the Yankees picked up pitching ace Gerrit Cole. With Domingo German on suspension and Luis Severino out with Tommy John surgery, Paxton again was projected to be the number two starter in the rotation. Paxton sputtered at the begining of the season and then had his season derailed by a forearm injury that kept him out the rest of the season and out for the postseaon.

Paxton throughout his career has been frequently injured. But Paxton pitched well in the 2019 postseason winning both of his games. Paxton has been a top pitcher for many of his years. If the Yankees can broker a good deal they should resign “The Big Maple.” Probability of return 60%.

Britton has been excellent for the Yankees.Â  At one point this year, when Aroldis Chapman was diagnosed with the coronavirus, Britton saved eight games in a row for the Yankees. He has proved that he can fill in for Chapman at any moment and do it well.Â  The Yankees will hope that Britton does not opt out. If he does, they are likely to work out a new contract. Probablility of return 80%.

There are several other New York Yankees that are not on the roster that have also become free agents.Â  The most notible are 40 year old back up catcher Erik Kratz, probability of return 60%. The other is SS Jordy Mercer an infielder, probability of return 30%. Others include C Josh Thole, RP Dan Otero, SP Chad Bettis, SS Jonathan Diaz, RP Wilking Rodriquez, 3b Matt Duffy, RP J Graham and RP Fernando Abad. The probability of return for these range from 30% to zero. Of these others, Dan Otero and Matt Duffy have the best chance of return.

The probibilities or return for any of these Yankees players could be affected by what the Yankee front office does to procure new players, like Tevor Bauer, Franisco Lindor, or even a J.T. Realmuto and others. That and the faith they have in up and coming prospects, will make this one of the most interesting postseason of changes in recent years as the Yankees try to reshape the team and get that elusive 28th World Championship.