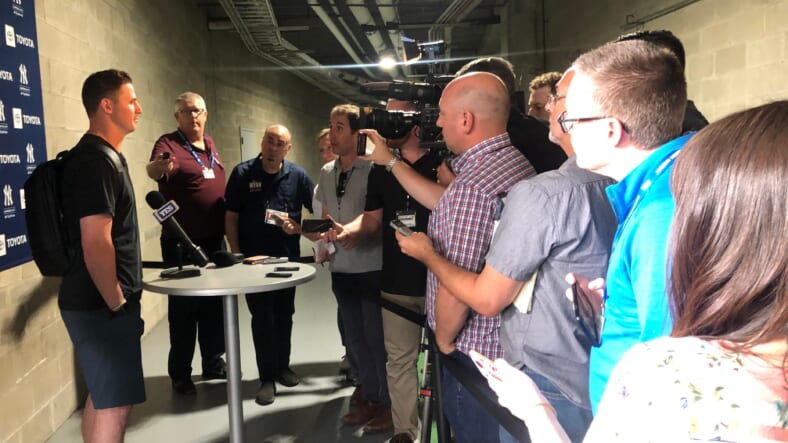 The coronavirus has turned things upsidedown for the New York Yankees, all of the sports and how we conduct our daily lives.Â  The obvious thing for Yankees fans is a canceled spring training, and a pushed back regular baseball season. But for many, there are unexpected consequences, as I first reported four days ago.

That installment included the effect on former baseball stars that can’t do revenue-producing appearances and events.Â  The MLB draft being moved back to later in the season, usually held in the first week of June, it now appears that it will be sometime in July. And I also reported on baseball scouts that have no players to scout.Â  In this report, we will talk about foreign reporters stuck away from their families, a fantasy season, the difficulties in finding a World Series stadium, and the effects for free agents.

Quarantined foreign sports reporters not only affects the New York Yankees medium but all of the sports.Â  But we will cover international media that covers Yankee star pitcher Masahiro Tanaka. Eriko Takehama from the Japanese media follows Tanaka around like a puppy dog.Â  But with the season delayed and the coronavirus, he finds himself quarantined in New York City hotel.Â  Japan has a big problem with COVID-19 as well, and Takehama worries about his family back home.Â  Of course, this same situation applies to all media that are stranded around the country.

Another situation these reports will face when and if the baseball season starts is their access to Yankee and other players.Â  It is most likely they will not be allowed in clubhouses around the country and may only interview players from a distance.

Necessity is the mother of invention

With no baseball, MLB has come up with some unique fantasy games.Â  They are called MLB the Show 2020.Â  The New York Yankees and other games will be available for streaming across a handful of MLBâ€™s social and digital platforms, including Facebook, YouTube, Twitter plus MLB.com, and MLB.tv. (If you missed it, all games from 2018 and 2019 are free on MLB.tv, if you want to go off-script and have your own opening day with a different game). If you want to keep it super simple, you can also find each game streaming on the website of its respective team.Â  The games have a real look even though the players are computer-generated to fantastic realism.

This may be putting the cart ahead of the horse, but MLB will have to figure out where to hold a World Series. Right now, we don’t even know when or if a baseball season will start.Â  But planning a postseason is another consideration that has to be on the minds of baseball officials.Â  Assuming the MLB wants to get in as many games as possible, it is likely that the regular season will stretch into October with a postseason that may be closer to Thanksgiving than Labor Day.

MLB has several choices most in the south, where it will be warmer.Â  They will want to have a World Series if there is one at a neutral site.Â  The best stadium to hold a WS game would be Dodger Stadium, although a little worn, it is the largest stadium in all of MLB holding over 58k fans, with the likelihood that the Dodgers could very well be in the series, it is not likely that officials will pick that stadium.Â  The same goes for Minutemaid Park home of the Astros.

My guesses for the best sites would include the brand new Globe Life Field home of the Texas Rangers.Â  The downside is that it is relatively small,Â  holding just over 40k fans.Â  But there is plenty of upsides; it has a retractable semi-transparent roof, it’s brand new, has excellent amenities, plenty of restaurants and lodging nearby, and a big plus is Six Flags amusement park is just down the street.Â  Another pick would be Truist Park, the former Sun Trust Park home of the Atlanta Braves.Â  It holds 42k fans in MLB’s second newest park.Â  It has a strong reputation and is located in a vast entertainment complex just outside of Atlanta.

The most obvious would be Marlins Park in Miami, but there are two downsides.Â  It is a small stadium, and because is Miami one of the most traveled to resorts that time of year, competition for hotel rooms could be a problem.

If there is no season or only a shortened one, it could have unexpected consequences for several Yankee players.Â  Although the delay may have benefited the Yankees by allowing Gary Sanchez, Aaron Judge, Giancarlo Stanton, and mostly James Paxton returning from back surgery to become more healthy, and now apparently ready when a season starts. It may not be as kind to free agents. Masahiro Tanaka, DJ LeMahieu, and James Paxton.

MLB has already decided regarding free agency, that this season, played or not, will count as a season played and will not extend their free agency.Â  Tanaka is at the end of his seven-year contract.Â  Tanaka’s 11-9 season last year with a high 4.45 ERA does not bode well for free agency.Â  If he can get in 15-20 starts this season, he could increase his value if he pitches well.Â  With James Paxton’s hot end of the last season, he is in less trouble.Â  In this writer’s opinion, based on what the New York Yankees did last year, they just may let these two pitchers dangle at the end of the season, preferring to negotiate with them rather than extend their contracts.

Although Hal Steinbrenner managing general partner is mostly against contract extensions as he has exhibited in the past.Â  The Yankees will probably not let last year’s MVP, DJ LeMahieu go into free agency and will most likely offer him an increased value three or four-year contract extension.Â Â  With all of these free agents playing well this year will be important to them and their baseball futures.