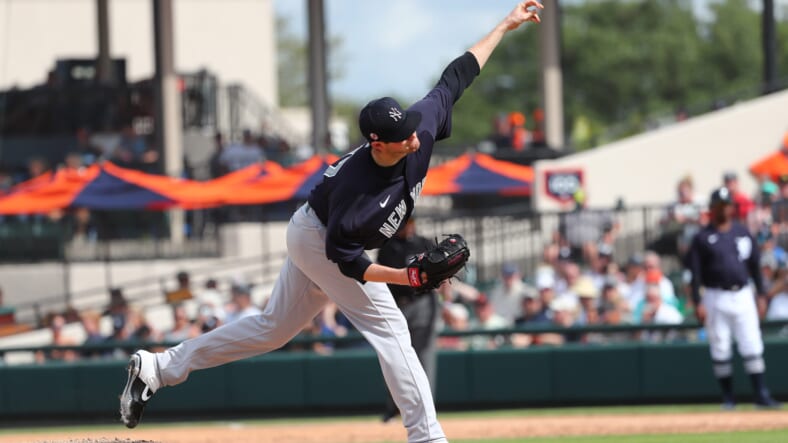 The New York Yankees traveled to Dunedin, Florida today to face the Toronto Blue Jays at TD Ballpark. Jordan Montgomery faced Thomas Hatch. The game time at 1:07 pm was not televised. The Yankees won their eighth game in a row behind Mongomery and Jhoulys Chacin’s excellent pitching. The Yankees shut out the Jays 1-0.

Montgomery had a hitless first inning. He pitched the first five innings of the game, the first Yankee pitcher to pitch five innings in a row. Over those five innings, he allowed only 1 walk, no hits, and no runs. Entering the game, he had an ERA of 1.80. With his performance today, he brought his ERA down to 0.90. He looked sharp in all five innings. Montgomery is not a strikeout pitcher, but in this game, he struck out 4 Jays. Montgomery got fly out after ground out after line out.

Jhoulys Chacin followed Montgomery and went 2.2 innings while striking out 3 Toronto Blue Jays. Lucas Luetge came in and finched off the Toronto Blue Jays in his 1.1 innings. For the eighth game in a row, it was all about the New York Yankees pitching as the Yankee lineup had a tough time hitting off the Blue Jays pitchers. They could only muster up one run today, and that was when Judge walked; Hicks then reached on a fielding error. Gleyber Torres then grounded out, Stanton struck ground out, scoring Judge from second. Jay Bruce struck out, ending the scoring in the game.

The Yankees bats were pretty quiet in the game, but Giancarlo had another good game. He singled twice and walked once as he continued his hot start in this spring training. Gary Sanchez struck out twice and flew out twice in the game. But he again showed off his rocket of an arm, throwing out Lopez when he tried to steal second base. DJ LeMahieu, who had no hits in 4 plate appearances, stole a base and had the only error for the New York Yankees; he played third base today. He scored the error on an errant throw to first base.

The final score reflecting the shutout was the Yankees 1 and the Jays 0. The winning pitcher was Jordan Montgomery, the loser Milone, with Lucas Luetge getting the save.