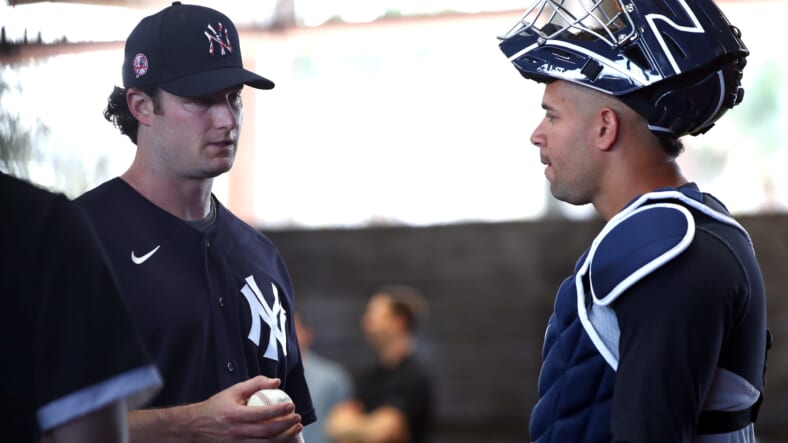 The New York Yankees won their first game of the 2021 season yesterday against the Detroit Tigers 5-4. It’s important to understand that these games win or lose, are irrelevant to the season, much should not be made over whether the Yankees win or not. There are two reasons for spring training: building up players for that start of the regular season, and two and possibly more important, is for management and coaches to evaluate pitchers and hitters and decide where they will fit in with the team. Yankee fans want to see the Yankees win, but that is not the point.

Another thing to consider when reporting on any player or pitcher is that you are looking at a tiny sample that may not represent the player’s overall performance. Any writer’s comment at the end of spring training will carry more weight than this early in the training period. I am basically saying that reporting on these early games, other than factual, should be taken with a grain of salt. They are just conversational.

Gerrit Cole pitched the first inning in yesterday’s game. It didn’t go well. Tiger hitters pretty much had their way with Cole; he allowed three hits and an RBI. He obviously struggled throwing 29 pitches in the half. The pitch count probably accounts for him not pitching a second inning. It should be noted that he was not pitching to his personal pitcher from last year, Kyle Higashioka. He was pitching to Gary Sanchez, as he did in both of the batting practices he threw.

Like it or not, like Sanchez or not, the conversation about who catches Cole is not going to go away. Last season with Higashioka catching, Cole was 3-1 with an ERA of 1.00. With Sanchez catching, Cole was 4-2 with an ERA of 3.91. Those stats are hard to ignore. Cole also had a tremendous record pitching to Robinson Chirinos when with the Astros. Cole often struggled when pitching to Sanchez, and that didn’t change yesterday. Cole had a long talk with Sanchez in the dugout between innings. Cole did not return to pitch a second inning.

Gary Sanchez remains aÂ  controversial player for the New York Yankees. The once-star for the Yankees hit only .147 last season and continued his subpar catching. But as the season progressed last year, he was eventually replaced as the catcher in several games, including in the postseason. But in the end, the Yankees continued to show faith in the catcher and gave him a contract for the 2021 season.

Other than the catching situation Sanchez has got to show that he can hit and hit for power to remain in the lineup. In two spring training games, the slugger struck out twice, but in his third appearance at the plate, he hit a monster home run the went past the protective netting meant to keep balls from traveling out of the park. The ball ended up on the highway outside the park. That is the power that has kept Sanchez in the game. How he plays during spring training will tell if he continues to be the Yankees’ starting catcher.

Jameson Taillon pitched his first full inning for the Yankees yesterday since becoming a Yankee. During the offseason, he was traded from the Pittsburgh Pirates, where he was a fellow pitcher with Gerrit Cole. Yesterday he pitched masterfully in his inning, putting down the Tiger side in one two three fashion using only seven pitches. It’s a small sample; the Yankees will be observing the starter as he comes back from his second Tommy John surgery. So far in spring training, the Yankees are impressed.

Chacin, who may be fighting for a fifth spot in the pitching rotation, didn’t pitch very well for the Yankees yesterday. In one inning of relief, he gave up two runs to Tiger hitters. Garcia walked, and Wilson Ramos hit a long home run off the centerfield netting, and just like that, the Yankees were behind three runs. Goodrum walked, Greene singled with Goodrum moving to third. Rogers struck out, Pinero with two outs, Green stole second on a late throw by Sanchez. Pinero grounded out, ending the inning, but Chacin gave up two runs.

The New York Yankees drafted Chris Gittens with the 362nd overall pick in the 12th round of the 2014 First-Year-Player Draft.Â  He is the New York Yankees number 46 prospect. But of all Yankee player prospects, he has shown the most power behind the plate. Yesterday he put on a display of that power that will be remembered throughout spring training. He hit a monster Grand Slam for the Yankees that won the game for them. He is a non-roster invitee to spring training. If he continues to show power like he did yesterday, he could find his way onto the Yankees roster.

The New York Yankees will be away from Steinbrenner Field today in their third exhibition game of spring training. They will face off with theÂ  Baltimore Orioles, a short 43-mile bus ride away at Ed Smith Stadium in Sarasota. Because of health concerns, the Yankees will only face Florida west coast teams during this spring training.

EmpireSportsMedia.com’s Columnist William Parlee is a member of the Society for American Baseball Research. You can follow me on Twitter @parleewilliam.