New York Yankees: Luis Gil’s glow brightens, but the Yankees fail the sweep of the Mariners 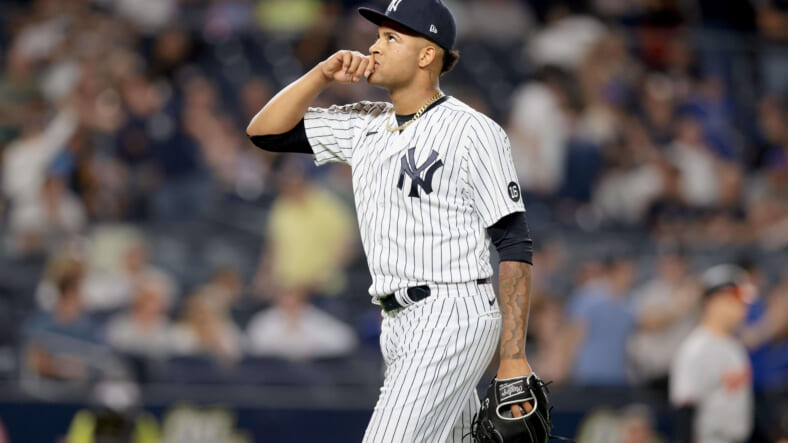 The New York Yankees entered today’s game hoping for the sweep of the Seattle Mariners after winning the first three. Sweeps of a four-game series are really difficult, especially when you are short as many players as the Yankees. The Yankees announced they had placed Anthony Rizzo on the Covid list before the game, their twelfth player to go on the list. They activated Luke Voit. At the end of a frustrating day, the Yankees could not complete the sweep losing the fourth game 2-0.

Today Luis Gil got his second start since being brought up from the RailRiders. In his first start, he was masterful, going six innings of scoreless ball. He is 1-0 with a 0.00 ERA. However, no Mariner has seen him pitch except via video.

Gil faced Yusei Kikuchi, who was an All-Star this year. The lefty is 7-6 with an ERA of 3.89 and an impressive 129 strikeouts. The Yankees got 5 runs off him in their first meeting this season in just two innings.

Through seven innings of the game, nothing really happed as the game remained scoreless. Gil went five scoreless innings striking out eight Mariners. He brightened his already bright glow going eleven straight innings without allowing a run. He became the Yankee’s first pitcher to do that since “Slow Joe” (Judd Bruce Doyle) in 1947.

Wandy Peralta came in to replace Gil and allowed just one hit. Stephen Ridings struck out all three batters he faced in the seventh. The New York Yankees were again scoreless in the bottom of the seventh. Gleyber Torres was having a great game going three for three.

Going into the eighth inning, both teams were scoreless. At the top of the inning, it was back to the top of the lineup for the Mariners. Abe Toro faced the Yankee’s fourth pitcher Lucas Luetge and reached on a booted ball by Odor. Mitch Haniger walked.Â Â  With two on and no outs, Kyle Seager got a ground-rule double scoring Toro for the first run of the game. Ty France struck out. Jarred Kelenic went down looking. Kelenic argued the call and was thrown out, as was manager Scot Servais. Cal Raleigh got a two-run single to make it 3-0. the call at home plate was overturned, and the Mariners only picked up two runs. Seattle Mariners 2 Yankees 0.

Luke Voit led off and ground out in the bottom of the eighth inning, with the Yankees behind 2 runs. Then, Gleyber Torres went down looking. Then, Rougie Odor flew out to right, and it was off to the ninth inning.

At the top of the night, Jake Fraley struck out against Albert Abreu in for the final inning. Dylan Moore flew out to Gardner in center. Jake Bauers walked. Toro walked. Haniger struck out swinging. With last licks on the line for the Yankees in the bottom, Kyle Higashioka ground out to third. Brett Gardner reached on a ball back to the pitcher. DJ LeMahieu ground out to short, with Gardner advancing to second. Aaron Judge went down looking in a failed attempt to sweep the Mariners.

The final score was the Seattle Mariners 2 and the New York Yankees 0. The two runs scored by the Mariners were unearned. The winning pitcher was Sewald, the loser was Lucas Luetge, and the save went to Steckenrider.