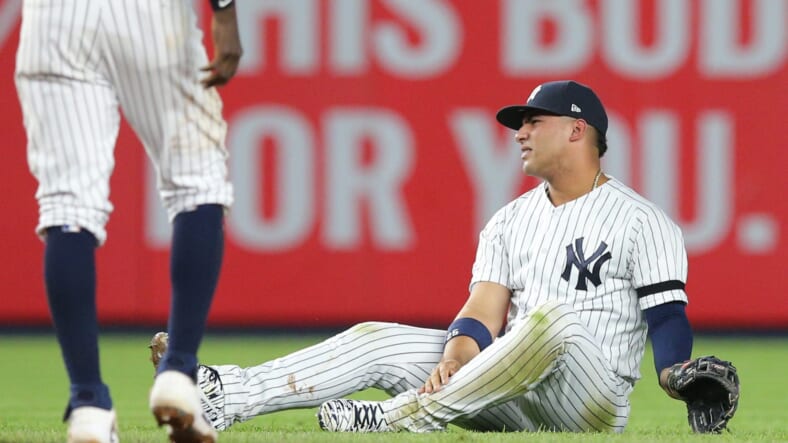 It was only a matter of time before the New York Yankees picked up right where they left off in 2019 regarding injuries. The roster went through record-breaking injury numbers, and the latest big name to go down is shortstop Gleyber Torres.

Torres, who was running to first base after hitting a ground ball to shortstop, stumbled and picked up quad and hamstring injuries in the process. While he was placed on a 10-day injured list, the team announced Friday afternoon. Manager Aaron Boone stated that his timeline for return is 2-3 weeks.

Gleyber Torres' timeline to return from a strained quadriceps and hamstring is 2-3 weeks, according to Aaron Boone.

Both Torres and James Paxton are both scheduled to miss similar amounts of time, and with Giancarlo Stanton also out, the Yankees will likely gain back several starters in about three weeks. However, this is tumultuous, given the break in rhythm and shortened season.

The injuries don’t stop there for the New York Yankees:

If Torres and Paxton werenâ€™t enough, relief pitcher Zach Britton was also placed on the injured list before Thursdayâ€™s game due to a strained left hamstring. After lasting just two outs the night before, he felt something on the mound, which was cause for MRIs.

With the Yankees losing a bevy of starting players, they have dipped into their reserve options and taxi squad to supplement their losses.

Hereâ€™s what Boone said on Friday on WFAN regarding the next few days and who they are looking for in terms of pitching. He also gave encouraging injury news on DJ LeMahieu.

“We don’t have any games this weekend. We have a couple off days coming up next week, so we don’t have to really do anything real quick on that front,” Boone said on WFAN. “We haveÂ Michael King, who’s done a good job for us who’s kind of built up. We haveÂ Nick NelsonÂ up right now who can give us multiple innings. [Jonathan] LoaisigaÂ can be a guy that gives us a few innings. We have guys that could certainly fill that fill that role for us.

“I’d say he’s doing significantly better than anticipated. I think it’d be sooner rather than later,” Boone said on WFAN. “He took some dry swings for the first time today; played catch for the first time. So I don’t want to put time on it. The initial prognosis was two to three weeks, [and] I think that’s gonna be a fair estimate. So we’re getting closer on DJ.”