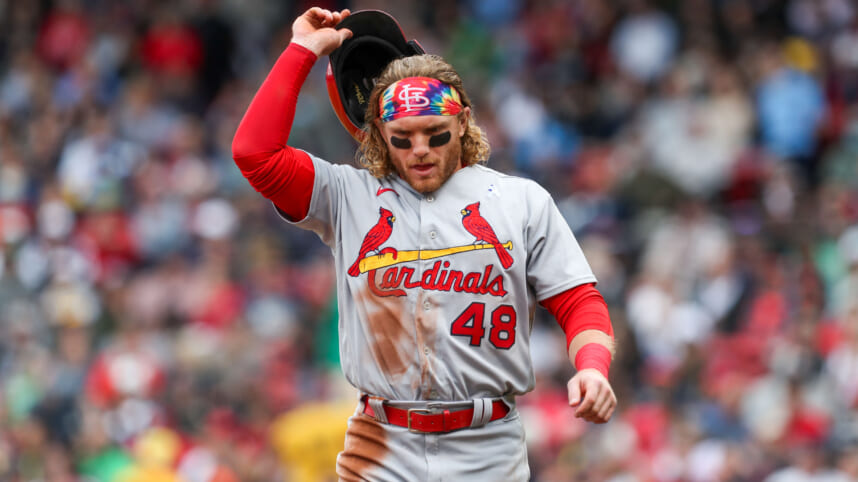 In the month of August, Hicks is batting .109 with a 19.6% on-base rate and a .109 slugging percentage. He’s contributed just five hits over 46 at-bats. With a desperate need to replace Hicks and Estevan Florial not providing much offensively, the team is waiting patiently for trade deadline acquisition Harrison Bader to return to the lineup.

Considering general manager Brian Cashman traded starting pitcher Jordan Montgomery away to the St. Louis Cardinals in exchange for Bader, it is quite clear he will play an integral role down the stretch.

Luckily, Bader is making solid progress with his recovery from plantar fasciitis. He’s been on the 10-day injured list since June 27, missing 44 games this season. When the Yankees acquired him, he was still sporting a walking boot and is still wearing it to make sure his foot is 100% healthy come September.

Bader said recently that he thinks he will be off the injured list by the first week of September or so, but they proceeding with caution and ensuring he is 100% healthy for the playoffs.

“I definitely think I’ll be (off the injured list) the first week or so of September. But I don’t want to get ahead of myself. I’m just following what they’ve got for me every single day.”

Bader is bringing some encouraging stats to the Yankees:

This year, Bader is hitting .256 with a 30.3% on base rate and a .370 slugging percentage. He’s tallied five homers with 21 RBIs, but he’s coming off a 2021 campaign where he recorded 16 homers with 50 RBIs. However, he’s tied his career high from 2018 with 15 stolen bases, showcasing his value getting into scoring position.

His 17. 8% strike-out rate is the lowest it’s ever been, but he’s only walking at a 4.9% clip, a number the Yankees would prefer to increase slightly. However, he is a charismatic player with an aggressive mentality both offensively and defensively.

Bader is considered one of the best defensive centerfielders in baseball, recording 15 defensive runs saved above average last season. This year, he sits at -2 runs saved, but the injury has undoubtedly affected that number.

With his range and impeccable athleticism, he will undoubtedly make a positive impact in the playoffs, at the very least smoothing over some of the downfalls Hicks presented.