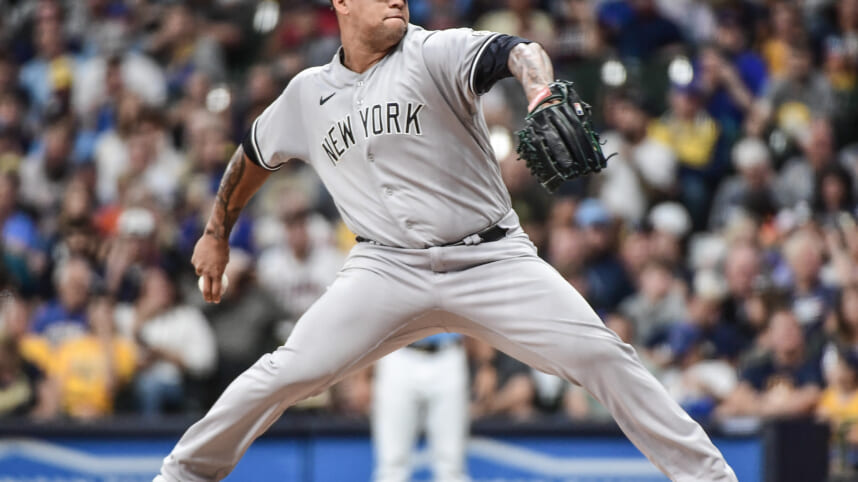 When the New York Yankees acquired Frankie Montas from the Oakland Athletics at the trade deadline, they imagined he would be a stellar No. 2 for the postseason behind Gerrit Cole. However, those expectations have quickly dwindled.

Montas suffered shoulder inflammation in his most recent start and will likely miss the next few weeks leading up to the postseason.

Aside from his injury, Montas has struggled considerably with a Yankees to begin with. Over 104.2 innings in Oakland, Montas featured a 3.18 ERA, 3.22 xFIP, 9.37 strikeouts per nine, a 73.6% left on-base rate, and a 46.1% ground ball rate. Most of his metrics decreased in a negative way, potentially as a result of tweaked mechanics and fundamentals.

Pitching coach Matt Blake changed Montas’s delivery slightly and messed with his pitch usage, which unfortunately degraded his efficiency. However, the Yankees are still hoping that Frankie can impact the team in some way once he’s eligible to return.

“It’s probably getting to a point where it’s going to be tough as a starting, built-up option,” Boone said this past Sunday. “Especially if, in a few more days we’re at 14 days. Then you start building that back. So that might be a challenge. But I do think there’s a chance that he can have a role and impact us. It’s just a matter of how the next couple weeks go.”

The New York Yankees got a different Frankie Montas:

The expectation is that Nestor Cortés will be the No. 2 in the rotation with Luis Severino close behind since Montas likely won’t be ready to make a start during the team’s first playoff series. They may look to utilize him as a bullpen arm once he returns.

Interestingly, the 29-year-old starter was solid in the first inning for the Yankees, recording a 2.25 ERA across eight starts. He gave up nine hits with zero homers, showcasing quality stuff. There could be a correlation there between first-inning stats and utilizing him out of the bullpen over one inning.

Nonetheless, the Yankees have a relatively strong bullpen when they are firing on all cylinders, but they’ve been a bit spotty as of late. There’s a good argument to make that both Aroldis Chapman and Zack Britton should be left off the playoff roster completely, given Wandy Peralta makes a full recovery after being placed on the injured list with a back issue.

It could be a while for Frankie:

Of course, the Yankees must get past the first round of the playoffs to get Montas back entirely since he won’t have much time to ramp up coming off the injury. It will be interesting to see how management deploys him moving forward.