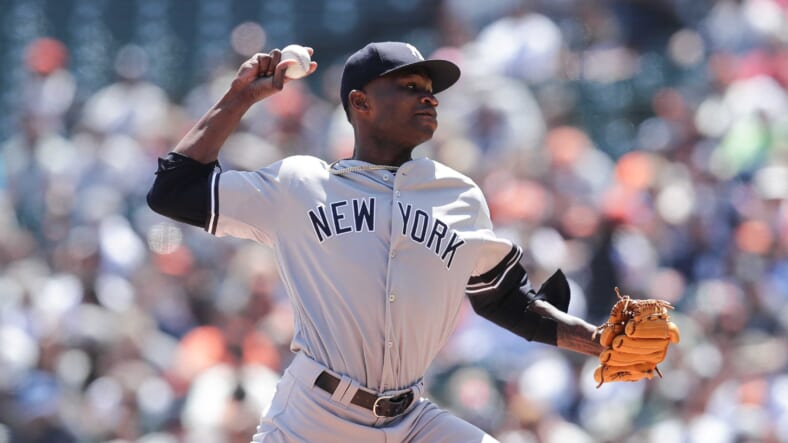 For his second straight outing, New York Yankees starting pitcher Domingo German had a rough go of things on the hill, this time against the Boston Red Sox. On Sunday against the Royals, he went five innings and got a no decision. However, on Saturday, he didn’t even make it through four innings.

All a matter of location

We all know that Domingo German has killer stuff, it’s just a matter on if he can locate it.

On Saturday against the Red Sox, German went 3 and 2/3 innings, giving up three runs off of six hits and two walks, also registering eight strikeouts.

That stat-line just proves that it’s all location. He only got 11 outs on the mound, and eight were via the strikeout.

Now lets take a look at a few different at-bats. To lead off the top of the fourth inning, German was facing Xander Bogaerts and threw a change-up to him on a 1-1 count. Because change-ups are basically slower fastballs that break a bit, you want to keep the ball low in the zone. German didn’t, and instead left it middle of the zone and the result was a shot to left field.

Now, a little earlier in the game, Brock Holt singled on an 0-1 fastball right down the middle. The ball was intended to be down and in, and it just didn’t go as in as it was supposed to.

And, something German had trouble with was pitching to the bottom of the order. Both Holt and Sandy Leon got two hits off of German, and both batters were hitting under .200 entering the game.

We all know that Domingo German can be a lights out pitcher, he just needs to locate the ball better to have some more of the success he was having early in the season.