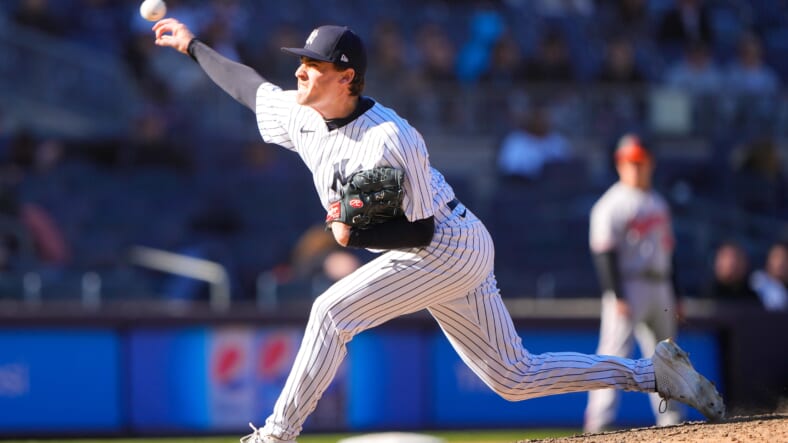 New York Yankees stud rookie Ron Marinaccio has been one of the revelations of this exciting season, and with Clay Holmes heading to the IL with “back issues,” Ron the Don looks to be thrust right back into a prominent role.

Marinaccio’s time at the majors has shown that he has what it takes to be utilized in high leverage situations, and the Yankees could opt to deploy him in the 8th or 9th inning, if they so choose.

Prior to getting optioned to AAA Scranton, Marinaccio had been arguably the team’s most efficient reliever out of the pen. Since May 1st, Ron was mowing batters down left & right, and using his jaw-dropping changeup, was breezing through his relief appearances.

Since 5/1, he’s posted a 10.32 K/9 to go with a 4.37 BB/9, whilst only giving up a solo shot (courtesy of a Michael Kay super-jinx) over 22.2 innings pitched. His changeup is devastating, and following his IL stint with arm fatigue, his fastball was sitting in the mid-to-high 90’s, an uptick over his consistent 92-94MPH he was throwing prior.

Could Ron Marinaccio feature as a closer for the Yankees?

Marinaccio may not be handed the reigns to the closer role right away, I suspect the team will lean toward Aroldis Chapman and Wandy Peralta over the Don, but he will most certainly toss his hat in the ring.

It’s never a good thing when the team has to send one of their most dominant relievers in Clay Holmes to the IL, but this phantom IL stint was predictable given Holmes’ struggles the past month or two. I imagine that Marinaccio makes an appearance out of the pen tonight, as a few new faces have slotted into the LU for the Yanks. All eyes will be on Oswaldo Cabrera as he makes his debut at 3B, and is batting sixth in the lineup.

Look for Ron the Don to thrive in whatever role he is given, as it seems like the pressure and moment never get to him.

This season, according to FanGraphs leverage system, Marinaccio has excelled in both medium and high leverage situations. Across 9.1 “Medium & High Leverage” innings, he’s given up just one run, and has held batters to a sub .440 OPS in those spots. He’s done everything the team has asked for him, and his return marks a great day in Yankees baseball.