New York Yankees: Anthony Volpe on the way, but not soon enough 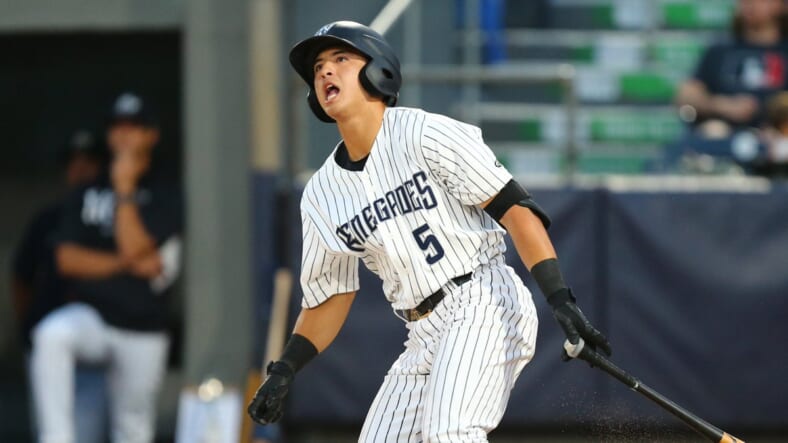 Suppose we know anything about New York Yankees, baseball. In that case, it’s that everything is subject to change, including having a troubling questionable season to winning 13 consecutive games, then going on a losing streak only to get to the AL Wild Card and losing there to the rival Boston Red Sox. But change is not limited to the big team. Things can change ever more quickly in the minors as well. So although sensation Jasson Dominguez has been the Yankees’ number one prospect for a couple of years, that may no longer be true.

Making news for himself, Anthony Volpe had been winning for the Hudson Valley Renegades. Last year I wrote: In a messed up spring training caused by the coronavirus, Anthony Volpe got a taste of playing with the big guys.Â  When a minor leaguer tested positive for the virus, all the minor leaguers were tested.

The now 20-year-old second baseman and shortstop, Volpe compiled stats between two New York Yankee affiliate minor league teams that would make many major leaguers blush with joy. In 109 games, he hit .294 with 86 RBIs and 27 home runs. Based on a 162 game season, that more home runs than any Yankee Stadium player. However, despite these incredible stats, he was only promoted to the AA Renegades with six weeks left in the season and has never played AAA ball.

Because of his lack of experience, the Yankee organization has expressed that he will not be ready to make the transition to the Stadium until the 2023 season, when they feel he will be polished enough for the move. So, the Volpe situation could make it unlikely that the Yankees will go after a big-name shortstop in the offseason in favor of a stop-gap measure. Instead, they will be more likely to create a situation like Anthony Rizzo, a one-year deal that won’t be costly.

The case for a new shortstop has been caused by the failure of Gleyber Torres at the position. Torres has not grown as a Yankee; he has regressed as a failed shortstop and error-ridden second baseman. Probably the fault of the Yankee organization; I don’t see a long-term improvement in Torres, who is no longer the 22 year old with a bright future.

The New York Yankees have a bevy of possibilities to get themselves a new shortstop. Trevor Story has oft been mentioned, but I don’t see him as a good fit for the Yankees. Exciting possibilities for the Yankees that won’t break the bank include Javier Baez, Carlos Correa, and Jose Iglesias, a cheapy. Other names mentioned are Corey Seager and Andrelton Simmons. This writer and USA Today’s Bob Nightengale don’t expect that an armored car will be pulling up at Yankee Stadium anytime soon.

When Volpe was 18, he passed up on a scholarship to Vanderbilt and signed with the New York Yankees.Â  Last season (2019), he slashed a .215/.341/.704 line.Â  But for the month before his season was shortened by mono, he hit .318. Volpe got to play in one game at Gorge M. Steinbrenner Field that spring.Â  Disappointed by the sudden shutdown of camp, he returned to his home in New Jersey when the minor league quarantine was lifted. There was no minor league season in 2020.

This year he started with the Tampa Tarpons 302/.455/.623 with 12 home runs and 49 RBIs across 54 games. Playing so well and with the minor league re-alignment, Volpe found himself playing for the Renegades up the river from Yankee Stadium. Since there, he is challenging the Yankees to bring him up and by-pass triple-A play. The Yankees do not seem inclined to promote him until he is fully ready.

Volpe is an excellent defender at short and turning heads with his hitting. In 43 games with the Renegades, he is hitting .286 with 15 home runs. That is an average homer in every 3.5 games. He also has 37 RBIs. As a result, MLB Pipeline’s mid-season review has named the now 20-year-old shortstop as the New York Yankees’ top prospect, overtaking outfielder Jasson Dominguez.

Born across the river from Yankee Stadium in New Jersey, the 16-year-old Volpe attended Delbarton School in Morristown. As a senior at Delbarton, he hit .488 with 7 home runs, 17 stolen bases, and 34 RBIs. He was named New Jersey High School player of the year in 2019. Upon graduation, he committed to playing college ball with Vanderbilt University. But he was selected in the first round of the 2019 draft by the New York Yankees.

It seems like there is no stopping the young shortstop. Where he is headed, nobody knows for sure, but he is longed for the major leagues and maybe sooner than later. On August 19th, the Renegades were losing the game. Volpe in the ninth came to the plate and hit a walk-off home run to win the game for the Renegades 7-6. This past Sunday, Volpe created some perplexing excitement when he homered. He ran the bases and was immediately thrown out of the game upon reaching home plate. Apparently, he said something to the umpire as he passed third base. Volpe feels any news is good news.

Whenever a player plays excellent in the minors, there is no way to know for sure how that will translate in the majors, but you can be sure the Yankees will be watching, don’t expect him to start the 2022 season at Yankee Stadium.