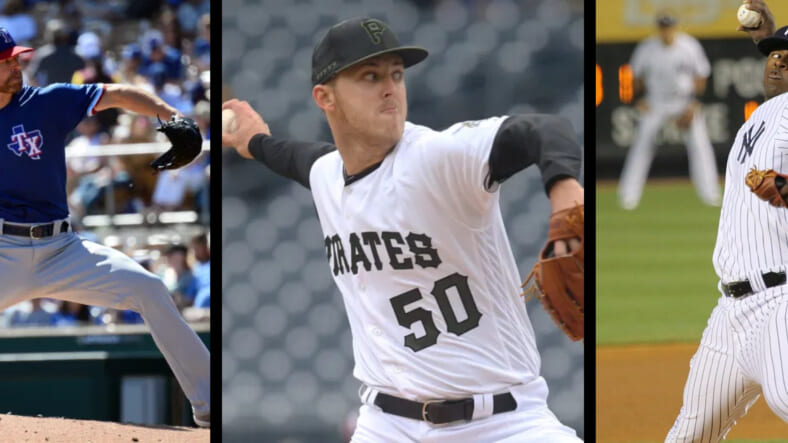 The New York Yankees won their 27th World Championship in 2009. The Yankees have more World Championships than any franchise in any sport, but they have had an eleven-year drought that has disappointed the boys in pinstripes and the fans as well. Now the Yankees, who have suffered multiple injuries in the past two seasons, embrace the injuries that have been plaguing them.

The Yankees are taking a creative but dangerous route to break that drought and win a 28th World Championship. In 2009 the Yankees had one of the best pitching rotations in baseball, led by newly acquired CC Sabathia, Andy Pettitte, AJ Burnett, Mike Mussina, and Joba Chamberlain. They also had a powerful lineup of Johnny Damon, Derek Jeter, Mark Teixeira, Alex Rodriguez, Hideki Matsui, Jorge Posada, Xavier Nady, Robinson Cano, Brett Gardner. That combination of good pitching and good hitting won them their 27th World Championship, their first since 2000.

The New York Yankees 2021 team is set up similarity with what could be excellent pitching and a lineup as powerful as any in baseball. The Yankees could very well be on their way to that championship they have long sought. So, what’s the catch? Although there is a huge upside to the Yankees projected starting rotation, there is also a huge danger factor, failure by injury. The entire Yankee rotation is a huge question mark; if they perform to their potential, they will be unstoppable, but if just a few cogs fall out of wack, it could be a disastrous season.

I have said several times in the last month that this is the Yankees’ season of opportunity, a season when they have the best chance to win than they have in years and are likely not to have again for years. Plain and simple, the teams opposing the Yankees are not as strong as they have been. Last year’s East division winner, the Tampa Bay Rays, have gotten rid of two of their winningest pitchers without replacing them. The Red Sox, although not looking as bad as last year, are still an organizational mess. The Baltimore Orioles will be near the bottom with the Red Sox. The Toronto Blue Jays will likely be the most competitive, although they still are not where they want to be.

The Yankees, after losing Masahiro Tanaka, James Paxton, and J.A. Happ to free agency when they were not offered qualifying offers. They allowed all three to walk. This left the New York Yankees with 2019 acquired ace Gerrit Cole and three pitchers returning from Tommy John surgery or suspension. Knowing this, you would think the Yankees would go out and get some bulls. But general manager Brian Cashman has gone the opposite way, hiring two more pitchers returning from the same Tommy John surgery or injury.

In the strategy, Cashman is betting on the upside, hoping to avoid the downside; if he is successful, he will be praised as a genius; if he isn’t, he will hear calls for his firing. Here’s the rotation:

Should any of these arms falter,, some talented backup is available, notable Deivi Garcia, who made his major league debut last season, going 3-2 ERA 4.92 in six starts. Behind him is the major league-ready Clarke Schmidt, who also made his debut last season. There is also Michael King, Luis Gil, and Luis Medina. Manager Aaron Boone also has the versatility of having Chad Green, Luis Cessa, and Jonathan Loaisiga to start games. To finish up the offseason, Cashman must add to the bullpen after Tommy Kahnle to the Dodgers and trading Adam Ottavion to the Red Sox. Stay tuned.

Manager Boone being aware of possible injury to these returning pitchers and adjusting to a much longer season; you will likely see all of these pitchers at some point in the season as Boone carefully manages inning limits to keep injuries at a minimum. He may also used a six-man rotation at times to give pitchers a rest.

Pitching is not the only challenge for Aaron Boone. Assuming the New York Yankees get to the postseason, Boone has to find a way to keep the bats from going silent for long periods. He also has to mix and match closers to prevent giving up the postseason winning run to whoever opponent the Yankees face.