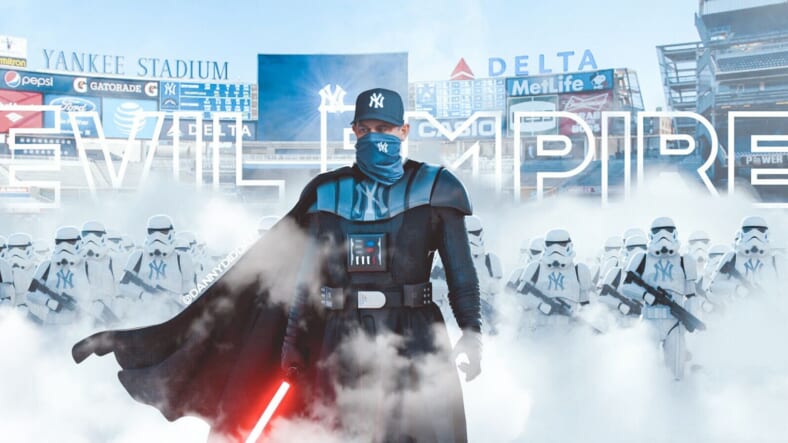 The New York Yankees are going in the wrong direction on the west coast, causing them to drop in the standings on the east coast. Last night, the Yankees entered Angels Stadium hoping to right the ship after losing two straight games against the Oakland Athletics. Instead, they lost game one 8-7 against the Los Angeles Angels, dropping another notch in the AL East standings.

Roughly two weeks ago, the Yankees were 7 games back in the East standings, but they went on a winning tear that lasted 13 games and getting closer to their goal of winning the east. But there was one big problem called the Tampa Bay Rays, which they have no control over. As the Yankees were winning, so were the Rays. With the Yankees losing 3 consecutive games, they have slipped back to where they were two weeks ago. It seems that the winning streak was just a big tease for Yankee fans, raising their hopes that they could still overtake the Rays.

In the last ten days, the Tampa Bay Rays have lost only one game; the Yankees have lost 3, resulting in a 2 game slip in the standings. There are only 30 games left in the 2021 season. Even if the Yankees go on a 30 game winning streak, the Tampa Bay Rays must lose 8 games for the Yankees to come out on top. Neither is likely. The Rays have only lost 6 games during August. It is no longer reasonable to think the Yankees can win the East. The reality is they must start winning again, so they don’t lose out of the wild card slot that they now hold onto by just two games over the Boston Red Sox.

The question right now is, can the New York Yankees return to their winning ways and get another sustained winning streak and become the “Evil Empire” that Yankees fans love and opponents hate? But to make that come true, the Tampa Bay Rays will have to cooperate some by losing more games than the Yankees.

The Yankees, now that they are hitting again and scoring runs, have to figure out how to protect leads with a dependable closer, which they don’t have right now. If pitching coach Matt Blake working with Aroldis Chapman, can get his fastball control back, the problem will be solved. If not, manager Boone will have to continue mixing and matching closers to fit the situation and hope for the best.

Although improbable, the Yankees can still overtake the Tampa Bay Rays; the time to do that is quickly evaporating with only 30 games left in the regular season. To win the division, the Yankees have to win 8 more games than the Rays, 7 more to tie. As long as the Yankees can win each of their remaining series, they will hold on to their wild-card berth. So it will not be a surprise if the division comes down to the last three games of the season when the Rays meet the Yankees at Yankee Stadium.

Since the All-Star break, manager Aaron Boone has been doing some of his best managing while with the Yankees during the second half. He has been clicking all the right boxes and making great decisions. If he can continue to do that for the remainder of the season, he will likely be at the top of the heap in line for Manager of the Year. But, of course, this writer is totally biased and hopes he can bring the New York Yankees to their 28th World Championship.