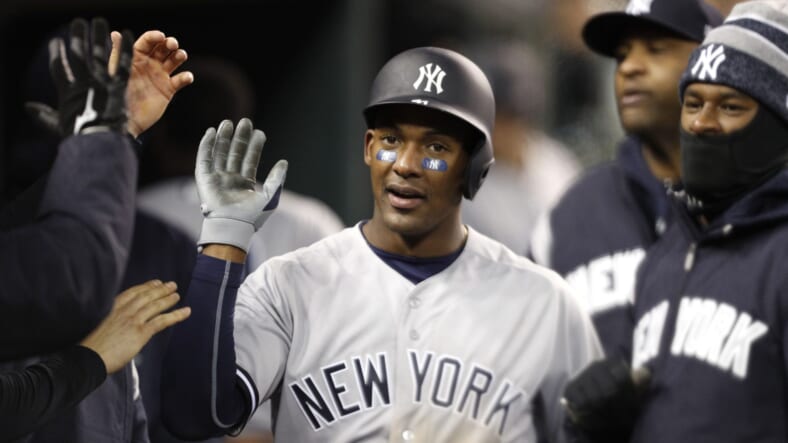 According to YES Network’s Jack Curry, the New York Yankees are calling up Miquel Andujar to possibly replace Gio Urshela at third base tonight when the Yankees meet up the Washington Nationals at Yankee Stadium. Urshela injured his knee making a diving catch at third base last night. After the amazing catch and failed throw to first base’s Mike Ford, Urshela remained on his knee, although he usually recovers from this type of dives immediately. He was removed from the game and sent for an MRI.

It appears the injury is not serious and he will be day to day possibly avoiding the IL. But he may not play during this weekend series. The Yankees will send down Albert Abreu or Micheal King to make room for Andujar on the roster. The New York Yankee fans may be surprised to find out that Andujar has done very well in the first games of the minor league season at Scranton Wilkes/Barre.

“Last night, the Yankeesâ€™ former third baseman of the future socked two home runs in the Rail Riders’ 17-11 victory over Syracuse. It should be noted, though, that one of the dingers came off a position player pitching. In total, Andujar finished the night 4-for-5 with two long balls and three RBI, playing first and third base for the Yankeesâ€™ Triple-A affiliate. In three games so far in the 2021 season, Andujar is hitting .462, with three homers and five RBI.”

Miquel Enrique Andujar was born on March 2, 1995, in San Cristobal, the Dominican Republic. He played baseball in the sandlots near his home. He was seen by a Yankee scout that was impressed with his hitting. The Yankees signed Miggy to a minor league contract at the age of just 16 in 2011. After a short time at the Yankees training facility in Boca Chica, Dominican Republic, he was sent to Florida. In 2012, he made his professional debut with the Gulf Coast Yankees.

Andujar spent until 2018 in the minor leagues, where he honed his skills. At the beginning of the 2018 season, he was with the Scranton Rail Riders, but he made his major league debut onÂ  April 1, 2018. He hit his first major league home run on April 17. On April 23, AndÃºjar hit a solo home run against the Minnesota Twins, marking his 7th consecutive game with an extra-base hit. On June 5, he hit his first major league Grand Slam. On September 29, Andujar hit his 45th double of the season, breaking the Yankeesâ€™ record for most doubles by a rookie, previously held by Joe DiMaggio.

Andujar was well on his way to becoming the next big Yankee star even though he wasn’t the best of defenders at the hot corner. April 1, 2019, he injured his shoulder and was put on the 10 day IL. On April 30, he was sent to the Florida Tarpons to rehab, on May 4th, he was reactivated, but he again injured the shoulder on the 13th. On the 21st, he was transferred from the 10 day to the 60 day IL due to a torn Labrum, which caused him to have season-ending surgery.

Meanwhile, the New York Yankees needed a third baseman and brought up Gio Urshela from Scranton. Urshela quickly became admired for his Gold Glove-like performance at the hot corner. Quickly thereafter, he became a star at the plate. When Andujar finally returned, he had lost his job at third, and the Yankees really had no place to put him. They tried different positions; he ended up playing in only 21 games during the 2020 season.

After a nothing special performance this spring training and still no viable position options, he didn’t make the Yankees starting roster. Instead, he was sent down to the alternate site to wait for the beginning of the minor league season. In his first game, he played in the outfield and the last two games at third base. Now, although it may be brief, Miguel Andujar will have the chance to show the Yankees he can still be valuable to them.