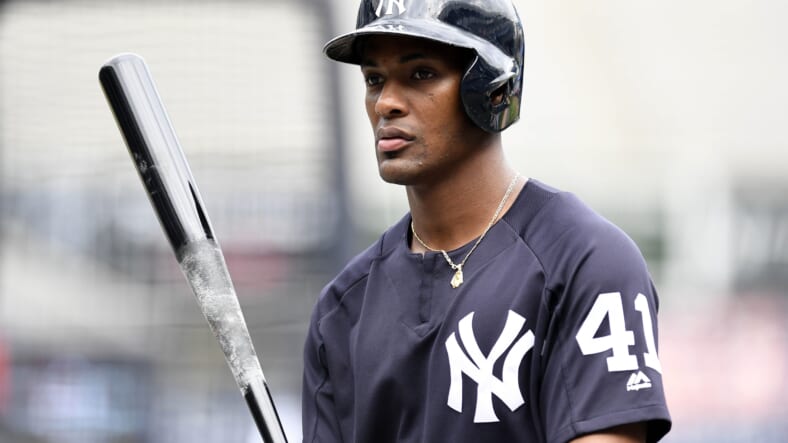 Depending on the outcome of Gio Urshelaâ€™s MRI on his injured knee, the New York Yankees could be very shorthanded before Luke Voitâ€™s return, which could come at some point next week. Rougned Odor is also on the shelf, and things could get ugly depth-wise.

As the Yankees try to navigate the situation, and hoping that Urshelaâ€™s absence isnâ€™t too long, they do have an infielder who is off to a fast start in Triple-A, and he happens to be an old friend and a known face: Miguel Andujar.

Andujar is not nearly the defender Urshela is, but he could be an option as an emergency third baseman for a few days, and he sure is off to a hot start with Scranton.

The Yankeesâ€™ infielder had a night to remember

Last night, the Yankeesâ€™ former third baseman of the future socked two home runs in the Rail Riders 17-11 victory over Syracuse. It should be noted, though, that one of the dingers came off a position player pitching.

In total, Andujar finished the night 4-for-5 with two long balls and three RBI, playing first and third base for the Yankeesâ€™ Triple-A affiliate.

In three games so far in the 2021 season, Andujar is hitting .462, with three homers and five RBI.

Itâ€™s too early to say if he is back to the form that made him the AL Rookie of the Yearâ€™s runner-up in 2018, when he hit 27 home runs, but it sure looks like it in the extremely small sample at our disposal.

Andujarâ€™s career with the Yankees was derailed by a torn labrum surgery in early 2019, and at the same time, Urshela appeared as an above-average third baseman both offensively and defensively and practically ran away with the gig.

But Andujar is still young and could salvage his career with a strong showing in the 2021 campaign.