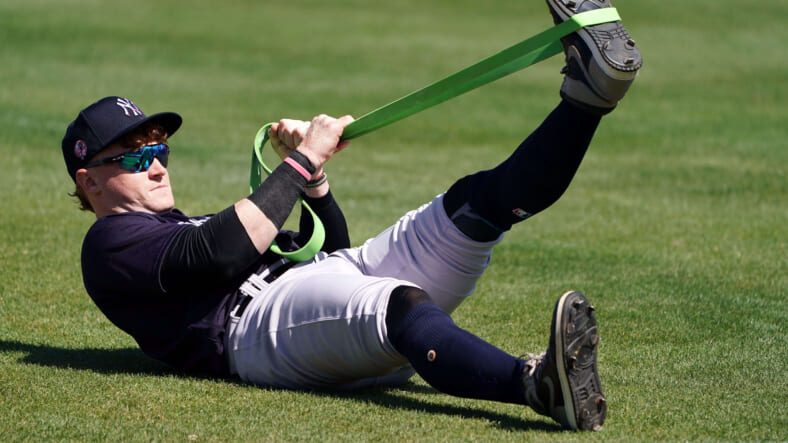 Pitchers and catchers for the New York Yankees have arrived at George M. Steinbrenner Field in Tampa, Florida, as spring training finally gets to a start. The position players will arrive shortly. Although this season will be as bizarre as last season, hopefully, it will be far from normal. In an almost empty training complex, the pitchers and catchers wander through the stadium’s halls with masks on and greeting each other with a wave instead of a traditional huge after not season each other since the end of the season.

New York Yankee manager talked to the media yesterday in his first spring training press conference. He was certainly upbeat, liking many of the moves the team made over the offseason.

“Talk is always cheap at this point, but I really liked the winter that we’ve had,” Boone said. “Some of the additions we’ve made, I think are going to be impactful. The makeup of this team is of championship caliber. That’s what we’re here to try and accomplish. Hopefully this is the year we get to the top of that mountain.”

Boone also announced that Clint Frazier would be his starting left fielder this season. Frazier has had a long journey getting to be a regular player for the Yankees; he has spent more time the last few seasons on the Scranton shuttle than playing baseball. There is no question that the kid has a live bat and can hit the ball; his often lousy defense has kept him from a permanent place in the lineup. But somewhere out of nowhere last season, he became a Gold Glove-like defender and earning an everyday job with the Yankees.

“Clint has come a long way in every aspect of his game,” Boone said. “He certainly earned his place last year when nothing was given to him. He had to earn everything. Really, the last couple of years he’s been a contributor, going back to the first year I was here [in 2018]. Last year, I think he really proved that he was ready to grab an everyday role on this team.”

Last season for the New York Yankees Frazier slashed .267/.394/.511 (149 OPS+) with eight homers and 26 RBIs in 39 games last season. His defense was so good that he became a finalist in the Glove Glove voting. The 2021 outfield will be rounded out with the Aarons, Aaron Hicks in center, and Aaron Judge in right field.