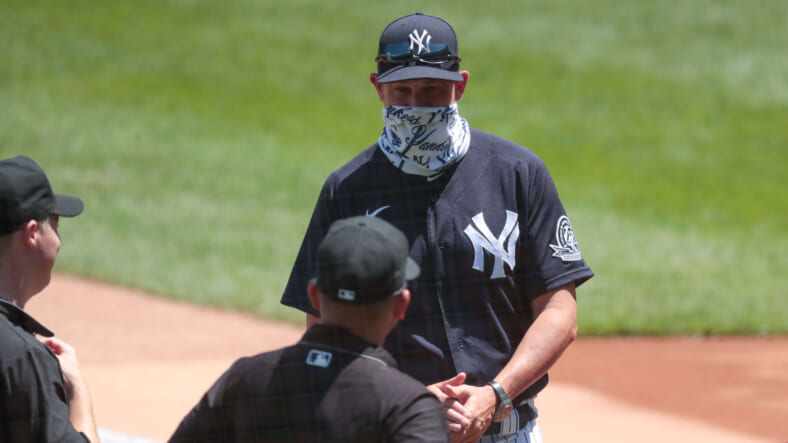 In the middle of the week, New York Yankeesâ€™ manager Aaron Boone had to endure a scary moment when he learned he needed surgery to insert a pacemaker. After all, he did have heart issues in the past and it felt like the perfect time to do it knowing that the teamâ€™s bench coach, Carlos Mendoza, would take good care of the squad in his absence.

He had the surgery on Wednesday, and amid slow, rest-filled days, he says he feels ready for a new chapter. Boone is already feeling better and wants to return to the New York Yankees.

In fact, according to Bill Ladson of MLB.com, Boone found himself back at George M. Steinbrenner Field in Tampa, Fla., on Friday, just a couple of days after the procedure. He is dealing with the COVID-19 intake process.

The Yankeesâ€™ skipper says he hopes to be in the dugout within the next couple of days, and he feels better than he did pre-surgery. Per Ladson, â€œhe felt lightheadedness, fatigue and shortness of breath. It didn’t help that Boone had a low heart rate, either. Now, though, itâ€™s a different story. As he put it, he and his â€œnew buddyâ€ — the pacemaker — are doing fine.â€

â€œThe last couple of months have not felt anywhere close to how I felt this morning, even yesterday morning getting out of the hospital,â€ Boone said. â€œIâ€™m really excited about it, really excited to get back, but I just really wanted to extend my gratitude to everyone.â€

Back in 2009, during his playing days, Boone underwent open heart surgery to replace an aortic valve.

â€œI feel ready to go and ready to tackle things. And honestly, sitting here, itâ€™s different a couple of days ago and the last few months,â€ Boone said.