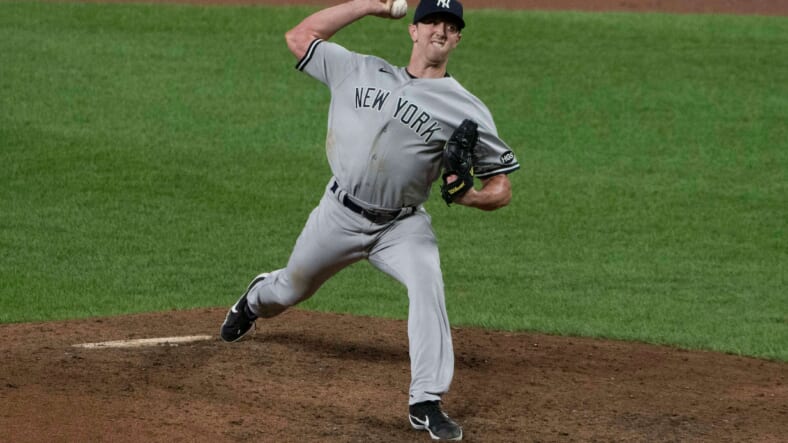 After losing two games in a row against the Baltimore Orioles, the New York Yankees went into their Labor Day game with the Toronto Blue Jays, hoping to right the ship and get a win with Jameson Taillon on the mound. Unfortunately, that plan failed as the Yankees came away with their 3rd consecutive loss. The Yankee team of the first half again showed up listless, failing to hit, making errors, and hitting into double plays. The final score was the Jays 8, the Yankees zero.

Taillon gives up 2 then pitches great

Jameson Taillon took to the mound yesterday, hoping to get a win over the Toronto Blue Jays. Instead, fans were shocked when he immediately gave up a back-to-back homer to the Jays. But then he was stellar, saving the Yankees’ overworked bullpen by pitching into the seventh inning, only giving up just one more hit.

As Taillon settled in in the first inning, both Marcus Semiem and Vlad Guerrero Jr. homered back to back. But then Bo Bichette and Teoscar Hernandez went down on strikes to end the inning and put the Yankees down by two. Taillon found his form and pitched a scoreless second even though he was challenged by two Yankees, Gleyber Torres, and Gio Urshels, committing errors in the inning. In the third, Urshela committed another error, but an inning-ending double play helped Taillon.

In the end, Taillon was masterful, completing seven innings and only allowing one more hit in the seventh.Â  He put down the side in order in the fourth. He followed that with a 1-2-3 inning in the fifth. Then, in the sixth inning, he used just 7 pitches to put down the Jays. Unfortunately, the Yankees closing woes continued yesterday when Brooks Kriske in the ninth allowed the Jays to blow it open, scoring five earned runs off him.

Where is the team that won 13 straight

New York Yankee fans are scratching their heads after three consecutive losses, wondering where the team that won 13 straight games had gone. In the last three games, the Yankees have only gotten 15 hits and scored only 10 runs. Yesterday they were dumbfounded by the Jays pitching and were shut out.

It seems that the 13 consecutive winning team has disappeared and replaced by the team that played in the first half. They have failed to lift the ball, failed to hit and yesterday committed three errors in the same game. To be fair, all three errors were committed by players Gio Urshela and Gleyber Torres, both of whom have just come off the IL. The two errors yesterday was shocking coming from Ushela, who is usually perfect. But for Torres, it was his second error in as many days.

The Yankees only got 5 hits yesterday, all singles. Only Brett Gardner reached second base when Gio Urshela ground out in the third. Then, DJ LeMahieu ground out, stranding Gardner.

Shortcomings still evident in the bullpen

The New York Yankees have lost faith inÂ  Aroldis Chapman; he hasnâ€™t figured out his lack of fastball control. Chapman was lights out during the first half of the season with an ERA of 0.00 through May 21st. During July, that ERA rose to 4.00 due to him seemingly losing control of his fastball. August wasnâ€™t much better, but on August 26th, he was dominant, encouraging the Yankees. He followed that up on September 1st with another scoreless close. But last night, the old Chapman showed up in the ninth.

These shortcomings have led the Yankees to use various relievers to close games. For example, yesterday, with a short bullpen, the Yankees resorted to using Brooks Kriske in the ninth. However, the Toronto Blue Jays made quick work of him, getting 5 earned runs off him and sealing the Yankee’s fate.

Yankees have more concerns than that Rays

Since the collapse of the Red Sox, the Yankees and their fans have been concentrating on winning and watching what the Tampa Bay Rays were doing as we near the postseason. In the last month of the regular season, scoreboard watching is common as teams jockey for a higher place in the standings. With just three weeks left to the season, it appears the Rays have a lock on the AL East unless the Yankees start winning again and the Rays have a colossal collapse.

Note: The Yankees continue their series against the Blue Jays on Tuesday at 7:05 p.m. EDT. Yankee ace Gerrit Cole takes the mound against Steven Matz for the Jays. The game will be televised on the YES Network and SNET in Canada.