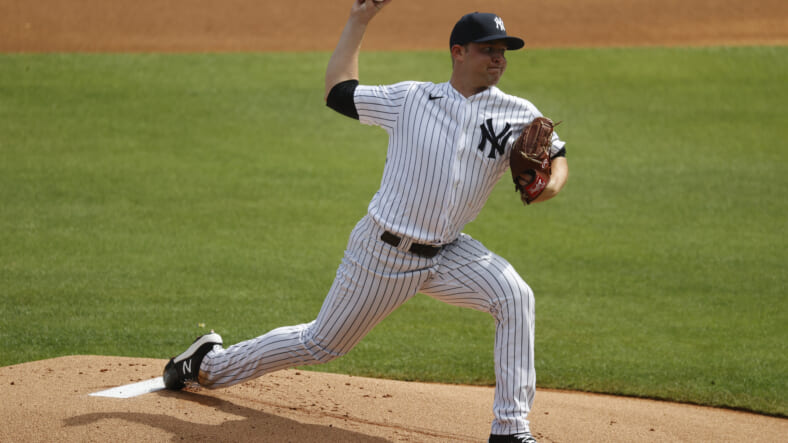 The New York Yankees faced the Toronto Blue Jays on Easter Sunday at Yankee Stadium in the three-game set rubber game. The Jays won the first game, the Yankees took the second game, and the Jays took the rubber game 3-1. The Yankee record after just three games is 1-2.Â  At his first start of the season, Domingo German completely bombed, and the Yankee hitting just wasn’t there. Here are three major takeaways from the game.

The big story in the game is not German’s failure; it is the fact that Michael King relieved German in the fourth inning and closed out the game, saving the Yankee bullpen for the Baltimore series. King, in six innings, only gave up one hit and one walk while striking out 3 Blue Jays. He put down sixteen Jay hitters.

King’s outing must have turned some heads in the front office of the Yankees. According to Jack Curry, his outing today was the first time a Yankee reliever went six innings without allowing a run in the last 35 years. With stretching out King to 68 pitches, they can now use him as a starter if needed. Should a starter become injured, they now have two pitchers to look to, Jonathan Loaisiga and Michael King.

Today was a bit of a surprise to New York Yankees fans, as I am sure it was for management. German was the Yankee’s best starter in the spring. He gave up 2 runs in 13 innings while striking out 11.8 hitters per nine innings.Â  The Yankees probably thought that German would give them the best start in the Jays series, but as it turned out, he was the worst.

In Sunday’s game, he gave up 3 earned runs in 3 innings, two of them home runs. The command that German exhibited in spring training just wasn’t there yesterday as he threw many balls right down the middle. I am sure their Yankees aren’t worried as one bad game does not make a season, especially since it was his first major league start in over a year.

I have spoken to this issue before. The Yankees, in general, are just not hitting, and they must, or they will get behind the eight ball early in the season. I reported previously that the Yankees in their last dozen spring training games only scored 3.1 runs per game, which is not enough to win games. Last season the Yankees scored 5.39 runs per game and didn’t win the division.

In the three Toronto Blue Jays games, the Yankees scored 2.6 runs per game. At the end of last season and in the postseason, the Yankee bats went silent as well. Manager Aaron Boone was questioned after the game if he was concerned that the Yankee hitter wasn’t hitting. He said no, they would get their timing and start hitting. As a Yankee fan myself, I hope they do. Nevertheless, long stretches of not hitting will not win a 28th World championship.