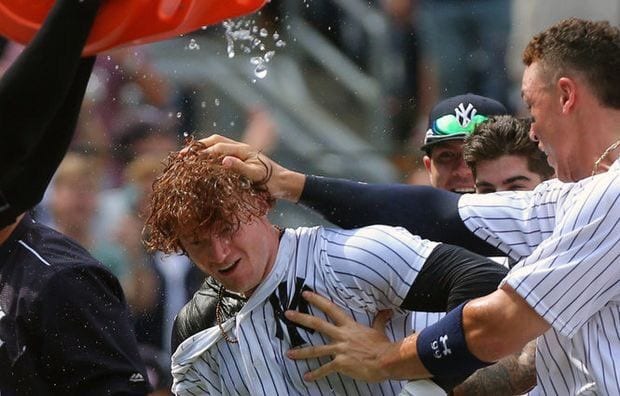 The New York Yankees entered last night’s baseball game with the Tampa Bay Rays with a season record of 1-8 against their nemesis. They also entered the game with little hope of winning a game against their ace Tyler Glasnow. But the Yankees did that and did it in a walk-off fashion in the eleventh inning. The final score was 5-3. The win went to Luis Cessa, and the loss to Andrew Kittredge.

Domingo German keeps them in the game

The New York Yankees starting pitcher Domingo German had a daunting task last night, beating the Tampa Bay Rays ace Tyler Glasnow, a Yankee killer. On top of that, he had to defeat a team that has won 15 of their last 16 games. Although he didn’t have his best stuff, he managed to hold down the Rays by making the right pitches at the right time. With 86 pitches through five innings, German allowed 3 hits for 3 earned runs, 2 of them home runs while striking out 5 Rays.

The New York Yankees, last night, got a walk-off win last night when Clint Frazier hit a two-run homer into the left-field stands. Frazier had also made a spectacular catch in the 10th. However, there is a problem with all of this. Previous to the walk-off, Frazier had gone 0 for 3 and was hitting just .182. This low batting average is not just Frazier; it’s nearly teamwide with only a few exceptions. The Yankees could muster up just six hits in the game. They, in the end, scored 5 runs; that’s one run short of how many they scored in their last four games.

The Yankees have a hitting problem; they don’t hit against any above-average pitcher. From 2017 to 2020, the Yankees averaged 5.25 runs per game. So far this season, they are scoring only 3.76 runs per game. The fact remains that they score 3 or fewer runs in most of their games. The difference between 5.25 and 3.76 is a winning season and a losing season.

Change may be in the air

The Yankee organization believes it is the best in baseball, and every decision they make is the right decision. Plain and simple, the New York Yankees are stubborn. But the fact is their philosophy may have some holes in it. The team is built around a power-hitting right-handed lineup. With a somewhat deadened ball this season, those home runs are far and few between. Aaron Judge and Giancarlo Stanton have more home runs than the other regular lineup combined. Lacking left-hand hitters, those that they have, have a combined batting average of just .190.

It’s no longer the beginning of the season, one-third of the season is behind us, and the Yankees aren’t in an enviable position in the AL East. If the Yankees win half of their upcoming series, they will not overtake the better hitting Tampa Bay Rays or the Boston Red Sox unless those opponents collapse, which doesn’t seem likely.

But change may be in the air. As the Yankees have been stubborn with their decision to make Gary Sanchez their starting catcher and Gleyber Torres their shortstop of the future, the front office may realize those moves, like keeping the underproducing Mike Ford at first when they have a much better option may need to change. They have already demoted Sanchez to a part-time catcher and have been subbing Torres at short with the better defender Gio Urshela. After last night’s game, they finally sent Mike Ford down to Scranton. So far, they have not made a corresponding move. But a move to make room for Chris Gittens may be in the offing. The Yankees have to adjust to the new baseball environment.

It’s also time for Yankee manager Aaron Boone to stop saying we have a great team and everything will be fine. Instead, he needs to get aggressive and innovative and create a spark that leads the team to win more games. Yes, there is a lot of season left, but with a third of the games behind us and with the Rays and Red Sox playing so well, time is running out to dig themselves out of the hole they have created for themselves. Adding a left-hand power-hitting first baseman and a power-hitting lefty out in centerfield will go a long way to solve some of the Yankees’ deficiencies.