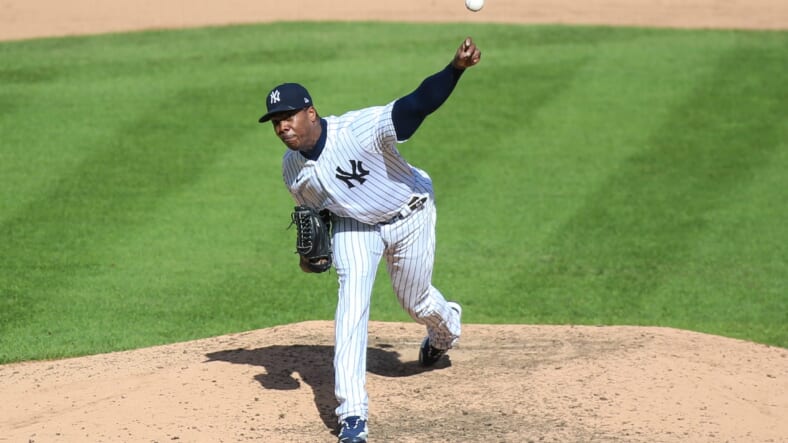 The New York Yankees met up with the Detroit Tigers yesterday for a game two matinee. Jameson Taillon was on the mound for the Yankees and the Tigers, Spencer Turnbull. The Yankees came away with the 6-4 win. Here some major highlights from the win.

Taillon gets his first win

New York Yankees’ pitcher Jameson Taillon got his first win yesterday against the Tigers. This is no small feat for the 29-year-old righty. It was his fifth start of the season. So far, he lost a game against the Orioles, the Blue Jays, and the Indians. He had his best outing in a no-decision on April 20 against the Braves. Now he has won his first game.

Before the start of spring training, the Yankees worked out a trade with the Pittsburgh Pirates to get the mid-rotation starter who used to pitch with Gerrit Cole when Cole was with the Pirates. What makes this first win so significant is that this guy has been to hell and back. He was cured of testicular cancer and has gone through two Tommy John surgeries. He didn’t know if he would ever pitch again.

Yesterday Taillon pitched like the Yankees always thought he would be able to. He pitched five full innings allowing only 3 hits, one run with 3 walks. He lowered his ERA to 5.24. He hopes this win is just one of many to come. After the game in interviews, Taillon was beaming with excitement and happiness and thanked all his teammates for their support. One of the reasons for his success was his control of his curveball and his high fastball.

Anyone who follows the New York Yankees knows that they seldom win when they don’t hit home runs in a game. The Yankees are built around the home run. Yesterday they garnered 6 runs without a single home run. What makes it even more significant is that 3 of their best hitters weren’t in the lineup: no Giancarlo Stanton, no Gio Urshela, and no Kyle Higashioka.

There was quite a bit of hitting in the game and several walks. Aaron Judge and Gleyber Torres both had 3 RBI’s in the game. Double plays have dogged the Yankees, but yesterday they avoided that for the most part. There were two blemishes in the game, Gary Sanchez had a passed ball, and Clint Frazier lost a ball in the wind and dropped it off the end of his glove. Gleyber Torres that is frequently called out on his sub-par defense, made an amazing behind-the-shoulder catch.

A slight blip for the bullpen

The New York Yankee bullpen has been near perfect in the young season. Last night not so much. Jameson Taillon gave up just a run, but the bullpen allowed 3 runs which is very unusual. Jonathan Loaisiga and Aroldis Chapman both had clean innings. The usually perfect Justin Wilson and Chad Green gave up the three runs. Luckily with the Yankees hitting the runs allowed didn’t cause a loss.

Aroldis Chapman has been amazing this season with his new pitching arsenal. He has added a splitter to his 100 mph fastball and change. Yesterday he had his 19th straight inning with two or more strikeouts per inning. Overall the Yankee pitchers have an ERA of 3.13, the lowest in the American League and lowest for the Yankees since 1981.