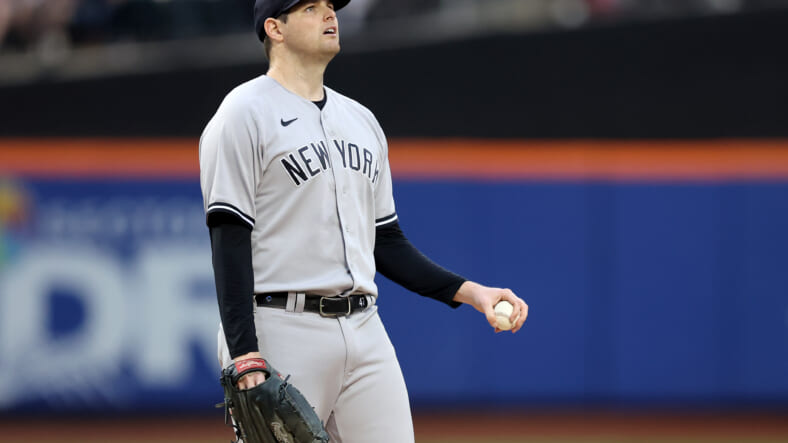 The New York Yankees and pitching coach Matt Blake undoubtedly have a specific strategy in mind with each of their individual arms. However, the strategy they deployed for starting pitcher Jordan Montgomery before he was traded to the St. Louis Cardinals didn’t exactly fit his preference.

The Yankees are seeing Jordan Montgomery thrive with another team:

Since joining the Cardinals, Montgomery has been fantastic over 43.1 innings. In that time span, he’s earned a 1.45 ERA, 3.05 xFIP, 7.89 strikeouts per nine, a 85.5% left on-base rate, and 56% ground ball rate. He’s also giving up far fewer homers, earning a 0.21 per nine rate. However, he places the majority of his success on his fastball, a pitch the Yankees rarely let him use.

“I didn’t have much faith in my heater (at) the Yankees,” Montgomery said plainly. “I’d been told that it wasn’t that good compared to my other pitches, and if I was gonna get hit, it was gonna be on a curveball or a changeup, which isn’t how you can pitch.”

In the month of August, which Montgomery spent with the Cardinals, he threw his 4-seam fastball 31.4% of the time, generating a .132 batting average against with a .158 slugging rate. He also produced a 12.3% whiff rate and 18% put-away rate.

However with the Yankees in July, he threw his 4-seam fastball just 4.8% of the time and 5% of the time in June. Clearly, the pitching staff didn’t prefer his fastball, relying heavily on his sinker, curveball, and change-up sequence.

It is possible the Yankees made a huge mistake not utilizing his fastball, despite the opposition being a bit less competitive with St. Louis. Montgomery tried to push back on the strategy the Yankees set out for him, but they simply believed it wasn’t as good as his other pitches.

It is clear Montgomery is still hurt over the last-second deadline trade, forced by general manager Brian Cashman to acquire centerfielder Harrison Bader. Bader hasn’t made an impact this season for the Yankees, still working his way back with Somerset and rehab assignments.

The Bombers were looking ahead to the postseason when they made this deal, viewing Bader as their starting centerfielder, offering elite defense and base running. Montgomery wasn’t expected to have a big role, so they viewed him as expendable, despite having one year left of arbitration before a free agency.

Looking back, this could end up being a huge mistake by Cashman, but until we see what Harrison Bader offers this team down the stretch, it will be impossible to tell.