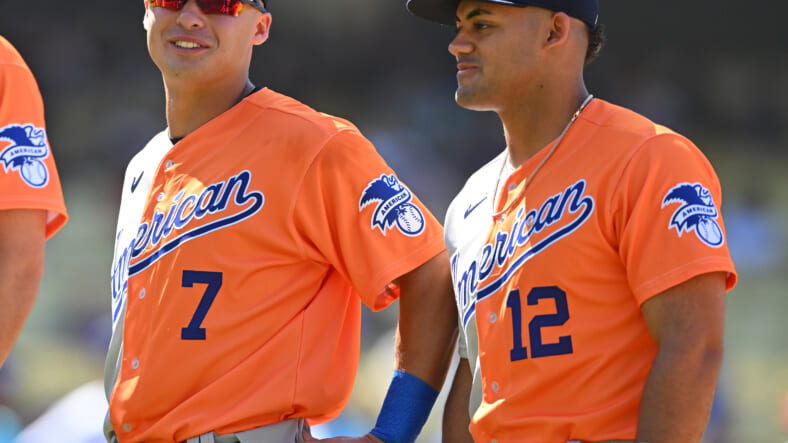 The Yankees have also been discussing star pitcher Luis Castillo with the Reds. There are some big names on the block that would definitely help the Yankees in their pursuit of a 28th World Series and New York is interested in making a deal.

While there’s been a lot of speculation, thus far nothing has really materialized. However, something happened today that really lit up the rumor mill and fans have been going crazy trying to figure out what’s been going on.

Earlier today in the middle of their game with Hudson Valley, top prospects Jasson Dominguez and Trey Sweeney were pulled. Worth noting that Sweeney was due up with the team trailing 12-8 and he was going for the cycle in his next at-bat.

In addition to those two being pulled, Triple A catcher Josh Breaux was scratched from his start tonight. Of course, there could be reasons for all of this. Sweeney and Dominguez were playing in serious heat while Ben Rortvedt is starting over Josh Breaux and that could be nothing but a rehab start.

Is a Yankees trade imminent?

Ever since the news broke that Breaux was scratched while Dominguez and Sweeney were pulled, nothing has happened. There hasn’t been a peep in terms of news or reports since all of this happened.

Could the Yankees be working overtime behind the scenes to get something done? It’s quite possible. Is this all one big coincidence? That’s also possible. As mentioned, Dominguez and Sweeney were playing in high heat today and might’ve been pulled due to exhaustion.

Perhaps Breaux was scratched just to give Rortvedt some time and give Breaux a rest. That is all certainly plausible. However, with how active the Yankees are behind the scenes on the trade market, it just seems like something more could be there.

I fully expect New York to make a big move before the deadline. What that deal is remains to be seen, but perhaps that deal is closer than we think.