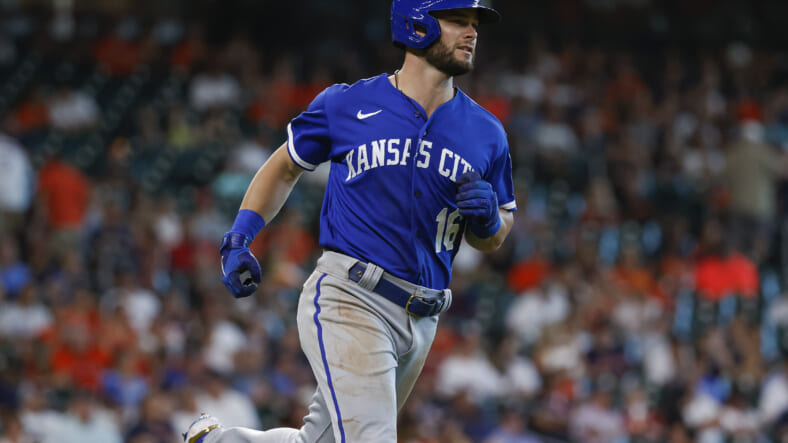 The New York Yankees are zeroing in on their first big acquisition of the deadline and it’s an outfielder, but it’s not the star outfielder on the market. This week, we’ve learned about Juan Soto being made available from the Washington Nationals.

However, it’s been widely reported that the Yankees were interested, but wouldn’t give up the farm. The Yankees have been on the search for outfield help and acquiring Soto would fill their need and provide them with insurance if Aaron Judge was to leave in free agency.

However, from the moment trade talks started, there was another outfielder who the Yankees were greatly interested in. That’s Kansas City Royals outfielder and former Red Sox outfielder Andrew Benintendi.

Benintendi is exactly what the Yankees have been looking for. High average, great defense, and he doesn’t strike out. He’s not the superstar that Juan Soto is, but he’s the perfect fit for this current team.

However, his vaccination status caused a pause in his market over the past couple of weeks. Benintendi was not permitted to travel with the Royals to face Toronto due to Canada’s rules regarding unvaccinated players entering the country.

Many thought that would take the Yankees out of the trade talks. However, Mark Feinsand said yesterday that Benintendi’s market was still active with AL East teams. Then, he just tweeted out that the Yanks have emerged as “Serious Contenders”.

Will the Yankees go after more than Benintendi?

Andrew Benintendi was my target from the beginning for the Yankees. He has the fifth best average in baseball and he would not be afraid of playing in New York. He’s also left-handed and checks every box.

If New York can look beyond the vaccination thing, he’s a perfect fit. The Royals are also ideal trade partners considering what happened last night with Michael King. King injured his elbow and will be out the rest of the season.

The Royals have a couple of really quality bullpen arms that could help the Yankees. Scott Barlow would be at the top of the wishlist with his 2.06 ERA and 16 saves. He also has a WHIP under one on the year.

Obviously nothing is done, but the Yankees are ramping things up and a big trade could be imminent.