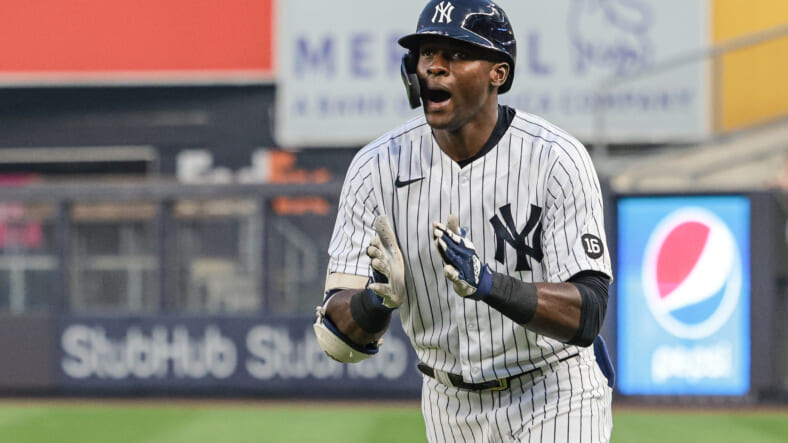 Replacing Matt Carpenter in the lineup is borderline impossible for the New York Yankees, given his production this season. Carpenter was hitting .305 with a 41.2% on base rate and .727 slugging percentage.

Recording 15 homers and 37 RBIs over 154 plate appearances showcases how dominant Carpenter has been since joining the Yankees several months ago. Carpenter was sitting with the Texas Rangers Triple-A affiliate before being plucked and injected directly into the Yankees ‘ lineup. The Bombers were the best team in baseball at the time, so it was very odd to see Carpenter immediately step into a big role, but he immediately returned the favor.

The legend of Carpenter grew from there, and while he still holds out hope he can return from a fractured foot in a few weeks, it is unlikely.

The Yankees have a few supplementary options they can consider:

In Carpenter’s place, the Yankees have a few Triple-A prospects they can call upon. With Giancarlo Stanton still working his way back from injury, the Yankees are a bit thin offensively. Both Estevan Florial and Miguel Andujar can contribute in the meantime.

Florial, 24, is hitting .281 with a 36% on-base rate, 14 homers, and 36 RBIs this season with Scranton. He’s stolen 31 bases, showcasing speed and athleticism. However, he hosts a 30.8% strikeout rate and 10.6% walk rate. That strikeout percentage balloons every time he touches the majors, which is a bit of a concern.

Defensively, Florial can play centerfield with his range and athleticism. He doesn’t have the best arm in the world, but his speed gives him a leg up over more unathletic outfielders.

Alternatively, Miguel Andujar could serve as the designated hitter until Stanton returns. With Scranton, Andujar is hitting .293 with a 33.7% on-base rate, 12 homers, and 46 RBIs. His 11.2% strikeout rate and 5.6% walk rate suggest he makes good contact. Andujar has never been a high strikeout player, but his defensive contributions are next to nothing.

At the very least, Andujar could play left-field occasionally, similar to how they used Carpenter, rotating players in the DH spot.

Andujar has made 14 appearances for the Yankees this season at the major league level, hitting .245 with a 27% on-base rate. Losing a phenomenal lefty bat in the lineup is devastating, but all the Yankees can do is hope Carpenter makes a full recovery and can help during the postseason.

Depending on the severity of his fractured foot, he could miss anywhere from 6–8 weeks before a return. There’s still a glimmer of hope he can impact the team on the baseball diamond this season once again, but at the very least, he is a leader in the clubhouse that will help motivate the team moving forward.