How the Yankees should use Oswald Peraza down the stretch 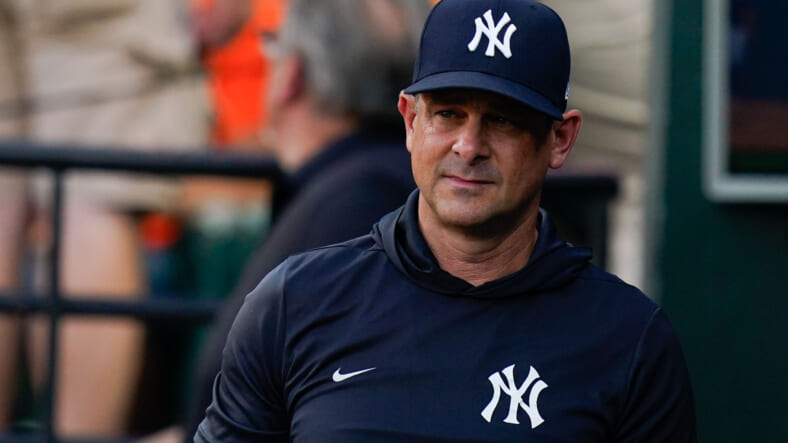 With the playoffs quickly approaching, the New York Yankees were able to add two more players to their roster from 26 to 28 with the playoff expansion rule. Luckily, that allowed them to elevate star prospect Oswald Peraza, but the question is, how will the Yankees get him involved down the stretch?

Peraza has waited patiently for his opportunity to get the call, even watching teammate Oswaldo Cabrera make his way to the major league roster, even though some believed Peraza was the more prepared player.

Over 14 games, Cabrera features a .235 average with a 28% on-base rate, including two RBIs and a 22.2% strikeout rate. However, he’s recorded two defensive runs saved above average and showcased some power in his game, tallying a 41% hard-hit rate.

How will the Yankees get Oswald Peraza involved?

To say the least, Cabrera has provided the Yankees with a spark, even though they continue to lose games at a worrisome rate. Peraza will hopefully contribute at shortstop, a position that is currently held by Isiah Kiner-Falefa.

IKF has struggled this season in multiple facets, but manager Aaron Boone backed up his play earlier this week, indicating he’s one of the best shortstops in baseball defensively. While he does feature 11 defensive runs saved above average, the rest of his stats are rather disappointing, and his offensive production has been negligible.

General manager Brian Cashman constructed a roster that once again relies heavily on home run production. Unfortunately, Kiner-Falefa does not contribute much in that category, producing just one long ball this season against the Boston Red Sox.

On the other hand, Peraza is completely dominating at the Triple-A level, launching 19 homers this season with a .259 average and 33% on-base rate. In fact, over his last 90 days, Peraza has hit .294 with a 36.5% on-base rate, 14 homers, and 35 RBIs. He’s also stolen 22 bases and grounded into just one double play. Peraza gets fantastic power behind his swing and elevates it with good launch angle. It will be interesting to see his transition to the top team; the Yankees need more slugging power at the shortstop position, and he can offer that.

It is also important to note that Peraza is a good infielder, producing a .971 fielding percentage at shortstop with nine errors over 748.2 innings this season. He’s turned 47 double plays across 89 games. He does have some experience at second, but his natural position is SS, meaning he should provide most of his value there at the MLB level.

Instead of benching IKF, it is possible the Yankees simply transition him to third base, where he won a Gold Glove. Josh Donaldson has been struggling considerably in the batter’s box this season but has been playing fantastic defense on the hot corner. However, it doesn’t seem as if Boone is keen on dropping Kiner-Falefa from the lineup, so they will have to find other ways to get Peraza involved.