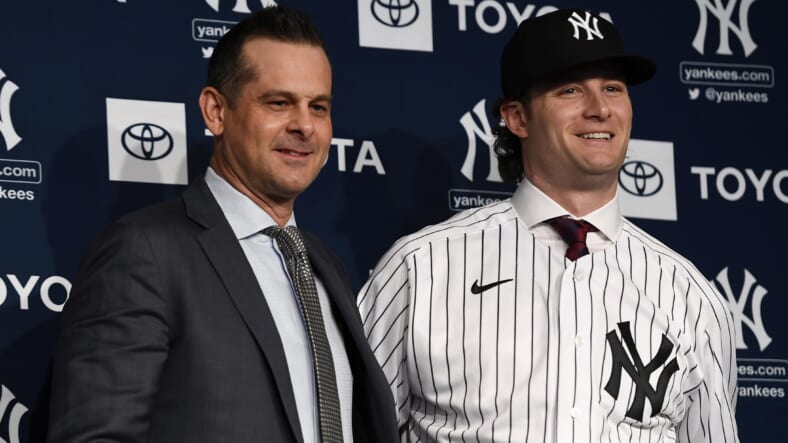 Aside from the two bottles of wine that sold Gerrit Cole on the New York Yankees and their illustrious franchise, new pitching coach Matt Blake played an integral part in luring arguably the game’s best pitcher to the Big Apple. Cole, who earned a nine-year, $324 million deal, will slide in as the Yankees’ top pitcher in front of Luis Severino and James Paxton.

Cole’s numbers are earth-shattering, as he ranked in the top five among MLB starters in total innings, K/0, LOB%, ERA, xFIP, and WAR (2019). Part of the reason he chose the Bronx was because of Blake, who received fantastic reviews from other players, including Trevor Bauer, who stated via Twitter:

For all the @Yankees fans coming to my page to ask me about @Blake_Matt, heâ€™s awesome. One of the smarter guys I know. Knows a lot about pitching. A lot about development. Good communicator. Etc. Really excited for him getting this opportunity and pumped to see the results.

The principal negative Cole has is a 17% fly-ball rate, which could be problematic in Yankee stadium. Domingo German faced a similar challenge last season but managed to overcome it, for the most part, seeing a decrease of .62 HR per inning in 2018 to .44 HR per inning in 2019.

Firing Larry Rothschild, who spent years as the Yankees’ pitching coach, was an unfortunate reality of modern-day analytics and progression, something that Blake factors into his game-plan.

â€œWatching it from across the field in Cleveland, thereâ€™s a bevy of really talented pitchers â€” I think itâ€™ll be interesting to get to know where they are in terms of the things theyâ€™re thinking about and the things theyâ€™re wanting to work on and improve upon.â€

As per Nick Nielsen of Empire Sports Media:

Nothing more reassuring than hearing a new pitching coach praise the talents and look toward the future and improvements down the road. Blake prides himself on his relationships with his players, as well as using analytics and different techniques to get the most out of them, seeing as to how talented the New York Yankees farm system is flooded with young, prosperous arms â€” Garcia, Gil, Medina, Abreu, Schmidt, Acevedo, etc. â€” and how the starting rotation has all the pieces and talent to be elite, Blake should be able to make an immediate impact.

The Yankees have numerous pitchers returning from significant injuries last season, which bodes well for Blake, who will have a fresh start with guys like Severino and Jordan Montgomery. However, helping Cole continue to develop and add new tools to his arsenal will be the priority in 2020.