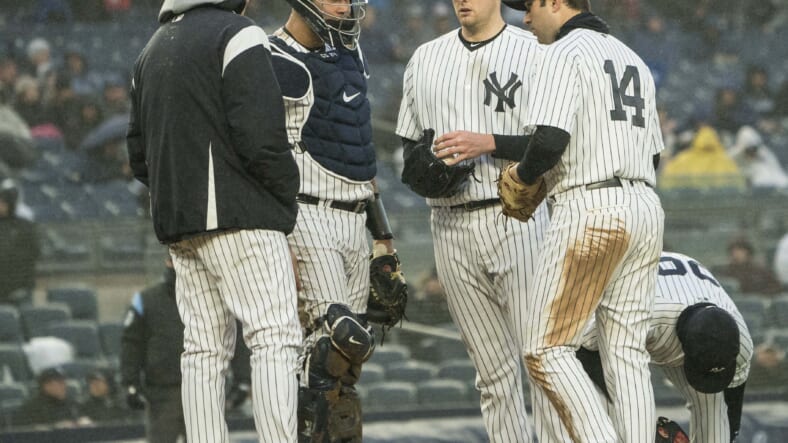 NEW YORK YANKEES – With Stephen Strasburg and Zach Wheeler having both hauled in massive contracts, and Gerrit Cole’s future potentially being decided within a few days, let alone hours, the offseason is in full effect.

Winter Meetings are the Free Agents’ chance to sit down with all teams and representatives interested. For many players, like Castellanos — who had an incredible stretch with the Cubs, but won’t likely return because of salary problems in Chicago — Winter Meetings are the best chance they have to pitch their case to the big market teams.

Despite all the talk of whether or not Gerrit Cole will earn the largest pitching contract in MLB history — Strasburg just broke it with a 7/245m deal to resign with WAS — the consensus opinion is that he is without a doubt the best pitcher on the market, and was viewed as arguably the best pitcher in the AL with Houston the previous two seasons. Not to mention Anthony Rendon still awaits his potential destination, and will likely be traveling there for mass amounts of money. With that being said, it is way too early to discuss who will be the best signing, but there’s one acquisition that I believe will stand tall, regardless of what deals are made in the coming weeks — and that is the Yankees hiring Matt Blake.

Who exactly is Matt Blake?

The New York Yankees hired former Indians developmental pitching coach Matt Blake, as they elected to move on from longtime pitching coach Larry Rothschild. Matt Blake is regarded as one of the most influential and intelligent coaches in the league, and his ability to get through to his players is arguably second to none. Blake played an integral role in the development of Trevor Bauer, Mike Clevinger, and Shane Bieber, amongst others. Having such a massive impact on three of the most electrifying arms in baseball, Blake did whatever he could to maximize their talents.

Before his rise within the Indians organization, he was developing high school pitchers at Lincoln-Sudbury Regional High School, where he was already instilling the importance of analytics and focusing on spin-rates and advanced metrics, rather than just the up-front delivery and mechanics of a pitcher. Blake applied those same teachings and ideals to the Indians pitching prospects in their farm. Eventually, he made such a profound impact that the Indians promoted him in 2016 to Assistant Director of Player Development, and thus the bromance with Bauer began.

Bauer’s love for statistics and his fascination with the ins-and-outs of spin rates on his fastball and curveball can be attributed in part to Matt Blake. Bauer changed his approach and style of pitching the 2016 season when Blake was promoted. Bauer’s tweet speaks for itself when it comes to how he feels about Matt Blake:

For all the @Yankees fans coming to my page to ask me about @Blake_Matt he’s awesome. One of the smarter guys I know. Knows a lot about pitching. A lot about development. Good communicator. Etc. Really excited for him getting this opportunity and pumped to see the results.

The difference in statistics for Bauer before Blake was given his new role the 2016 season, and what Bauer did with the tips, is pretty substantial (* = first half with CLE in 2019) — info via Fangraphs:

The 2016 season was before Blake began getting more involved with AAA and even MLB level players, but come 2017, he was more involved and frequently talking to Indians pitchers on the MLB staff. Blake wasn’t directly on the Indians’ MLB Pitching staff, but he was vital to the development of the new ace pitcher. While the numbers for Bauer from 2018-2019 jumped a bit, that can be more attributed to Cleveland’s first-half struggles, and his relationship with the Indians’ front office as well. When Bauer was dealt with the Reds late July of last year, his ERA rose tremendously up to 6.59 across 56.1 IP, but despite that, the majority of his numbers looked the same, if not better.

As for both Clevinger and Bieber, they also saw gradual improvements over the past three seasons with Matt Blake’s guidance. Bieber was a CY Young candidate this last season after tossing an astounding 214.1 IP to pair with a 10.88 K/9 and a superb 1.68 BB/9 — good for a 6.48 K/BB Ratio. Having Shane Bieber’s dominance start so soon only bodes brilliantly well for the Indians. In 2018, Bieber was seen as a guy that can limit the walks and would be their spot-starter if needed. Now, he’s viewed as one of the best pitchers in the AL, and his future is looking blindingly bright. Clevinger, despite his injury troubles, was also elite for Cleveland last year.

With Clevinger, it is all about whether or not he can locate his fastball and pound the corners of the plate. A very similar pitcher to Jack Flaherty, he excels at limiting the long-ball, and striking people out far more than allowing them to get on base. Since 2017, Mike Clevinger has struck out at least 25% of the batters he faces and has seen his BB% decrease each year as well. Add onto that his array of three incredible pitches: 4-seam, Curveball, Slider, and how he can mix them all in effectively and timely. His fastball last season had a Fangraphs Pitch Value of 19.1, with his slider at 9.1, and despite a down year with his CB (-0.1) the year prior, it was at 5.7. Essentially, having those three pitches all being plus pitches makes Clevinger’s life a lot easier. Not to mention that he hasn’t ended the year with an ERA over 3.15 since 2017 — despite failing to reach 150.0 IP twice, due to injuries.

There is no doubt that the Indians are more than grateful to Matt Blake for the work he did with their two young aces, and hopefully, he can do the same for the New York Yankees and their future.

What Blake brings to the table

Matt Blake on joining the New York Yankees – â€œWatching it from across the field in Cleveland, there’s a bevy of really talented pitchers — I think it’ll be interesting to get to know where they are in terms of the things they’re thinking about and the things they’re wanting to work on and improve upon.”

Nothing more reassuring than hearing a new pitching coach praise the talents and look toward the future and improvements down the road. Blake prides himself on his relationships with his players, as well as using analytics and different techniques to get the most out of them, seeing as to how talented the New York Yankees farm system is flooded with young, prosperous arms — Garcia, Gil, Medina, Abreu, Schmidt, Acevedo, etc. — and how the starting rotation has all the pieces and talent to be elite, Blake should be able to make an immediate impact.

While Blake may not have been a direct call line for all the Indians pitchers, the fact he maintained such a great relationship, as well as kept an eye out for the well-being of their careers shows me that he is dedicated to the game, and wants everyone under his guidance to succeed. The Yankees have one of the most analytical front offices in baseball, and adding Blake — a guy who bleeds stats & analytics and prides himself in looking at the numbers to maximize proficiency — is a match made in Heaven.

I have nothing but high hopes and expectations coming into the 2020 season, and regardless of whether or not Gerrit Cole signs with the New York Yankees, this rotation should be mightily improved next year. There is nothing but talent and upside with this New York Yankees pitching staff, with the likes of veterans James Paxton and Masahiro Tanaka, as well as young guns with high-end potential — Domingo German (interesting to see what happens with him next season), Jordan Montgomery (coming off TJ surgery), and the others in the farm. Add to that Luis Severino, who will be fully healed and back on the mound ready for war, and the potential of Gerrit Cole coming to the Bronx, and now we’re cooking with fire. I view it as if you’ve just given the Hulk a double-barrel shotgun.

Adding Blake didn’t make the headlines like the signings of many FA’s wills, but this move will benefit the Yankees for many years to come.