How Nestor Cortes matches up against Cleveland in Yankees playoff debut 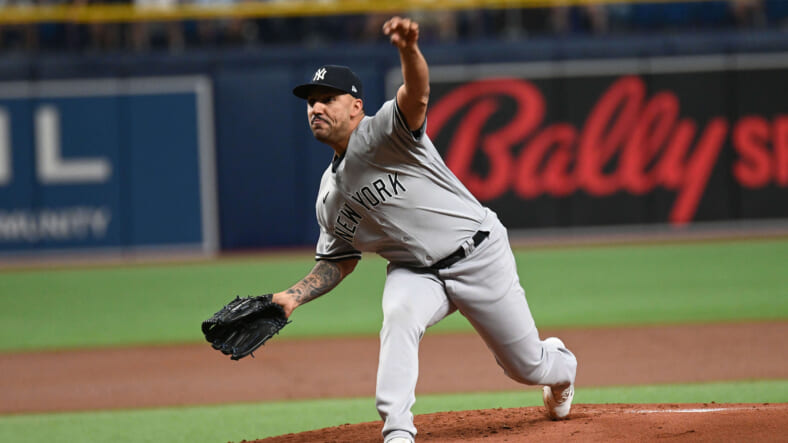 The Hialeah native gets the ball tomorrow for Game 2 of the American League Division Series for the Yankees. Nestor Cortes has faced the 2022 Guardians twice this year with great success, but how you succeed is just as important as whether you succeed or not for game-planning.

He’ll face off against 2020 Cy Young award winner Shane Bieber, the ace of the Guardians staff and the AL leader in fWAR since 2020 (10.7). While the Yankees have had Bieber’s number (5.74 ERA against Yankees), the most memorable beatdown came in the AL Wild Card Series in 2020, where he coughed up 7 runs in 4.2 innings. Nestor Cortes, on the other hand, boasts a 2.50 ERA against the Guardians with a 2.19 ERA this season alone. He’s had success against them in the past, but how does the breakout All-Star stack up against this pesky Guardian team now?

Relying on his Fastballs

Nestor Cortes threw his Cutter over 30% of the time in both start against Cleveland, and in those starts, the Guardians struggled to generate good at-bats against the pitch.

This is an incredible line on a cutter, and cutters tend to run really low BABIPs in comparison to other “fastballs,” which is important against a team like Cleveland that relies heavily on contact.

It also plays well with his Four-Seamer, as the movement on the Cutter is downward and glove side, we see the Four-Seamer barely drop and have little to no horizontal movement, and that deception coming out of the same arm-slot and similar tunnel until the pitch begins its descent towards the hitter, we see that Cleveland struggles to generate consistent contact, and that’s why Cortes has a 33.3% K% against the Guardians.

No one hits Cutters and Four-Seamers from LHP worse than Cleveland either, with little to no success on those pitches from southpaws:

His last start against Cleveland came on July 2nd, and there’s plenty of batters in this October Cleveland lineup who he hasn’t faced, and the ones who he has faced are going to be anticipating his Four-Seam/Cutter combination, so how can he keep them from trying to jump on those fastball variants?

Sliders generate a low BABIP as well at .275, which is expected as breaking pitches tend to run a better Stuff+ and better results on average than fastballs do. Why doesn’t he throw his Slider more than his Cutter and Four-Seamer, then? Well, that’s because to command breaking pitches consistently is a lot more difficult, as evident by the fact that his slider has the worst Location+ among all pitches in his arsenal. Those “hangers” tend to get absolutely hammered, and Josh Naylor gets a hold of a slider that just caught too much of the zone:

It had far more success in his second outing against the Guardians on July 2nd, as the Guardians didn’t register a single hit on the pitch despite using it nearly 27% of the time. His slider isn’t a pitch that he’ll rely on, but it’s certainly one that will be used to keep Cleveland hitters honest and keep the attention off his fastball variants when need be. The Yankees have a big advantage with Nestor Cortes on the bump tomorrow afternoon as he makes his playoff debut right here in the Bronx.