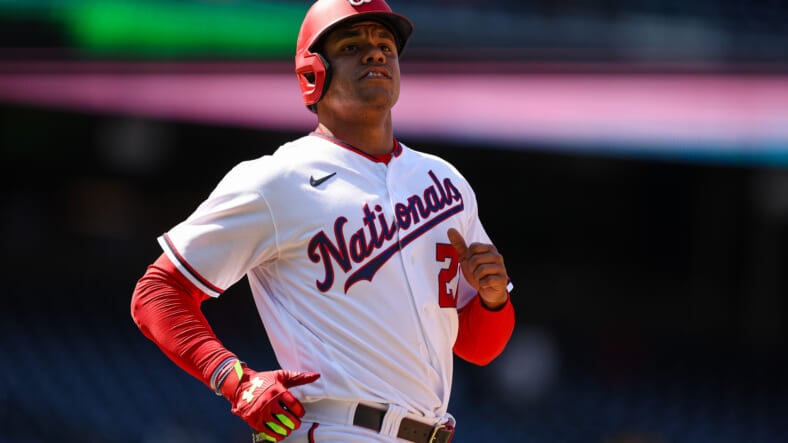 The New York Yankees and New York Mets seem to be at the forefront of the Juan Soto sweepstakes, but the Washington Nationals are asking for a few essential pieces to even get negotiations started.

Soto is a dream player for general manager Brian Cashman, who would be silly not to consider selling the farm for a 23-year-old superstar that is hitting .250 this season with a 40.5% on-base rate, 20 homers, and 43 RBIs. These numbers are unbelievable and represent Soto’s worst season as a professional, which is simply insane.

However, Cashman has been diligently building the Yankees farm system for years, meaning selling out for a single player will be hard to justify. However, Soto is a different breed of animal, and he provides the Yankees with enough fire-power to push them toward a World Series appearance in 2022.

The Yankees need to take on a massive contract first and foremost:

According to Jon Heyman of the New York Post, the New York Yankees need to be willing to take on Stephen Strasburg’s contract just to get the ball rolling. Strasburg is currently on a seven-year, $245 million deal. He’s currently on the 60-day injured list with a stress reaction in his ribs and is projected to miss the rest of the campaign.

That would put the Yankees on the hook for four more seasons at $35 million each, which is simply not possible for the Bombers considering they have to pay Aaron Judge. Alternatively, they could take on Patrick Corbin‘s contract and at least get a starting pitcher out of it. Corbin is currently on a six-year, $140 million deal. While he’s not injured, Corbin is a shell of his former self, posting a 5.87 ERA this season over 99.2 innings.

If Cashman is willing to take on one of those two massive contracts, he then has to immediately include his top three prospects, Anthony Volpe, Oswald Peraza, and Jasson Dominguez. However, he’s also going to have to throw in a few more talented prospects just to push it over the hump, meaning the Yankees have to consume a monster contract and give away the future of the team for a singular player.

At first glance, this seems like a terrible decision, but if the Yankees are able to retain Judge and inject Soto into the outfield, they would have the best offenses in baseball, bar none.

Should Cashman compromise the team’s future, selling high on extraordinarily talented prospects for Soto? Owner Hal Steinbrenner likely won’t allow him to pay both Judge and Soto, which will combine for about $1 billion in salary over the next 10 years. With that being the case, extending Judge and retaining the team’s prospects seems like the best course of action.