Have the Yankees seen the last of Aaron Hicks in pinstripes? 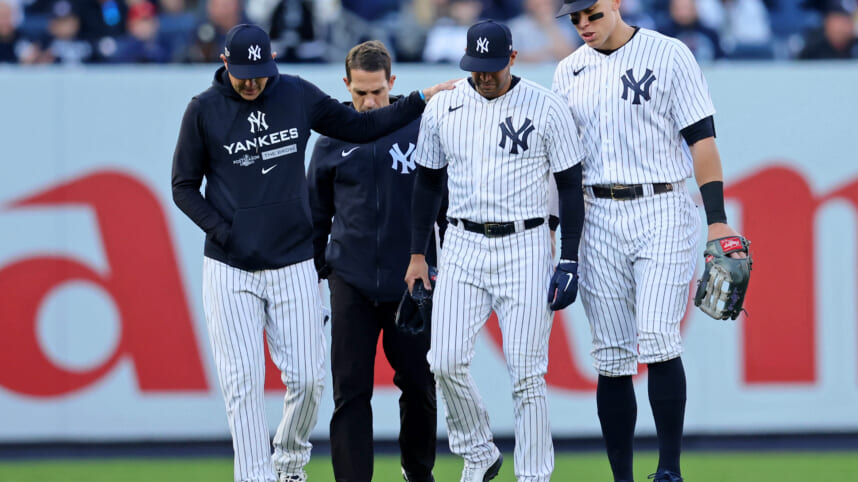 Oct 18, 2022; Bronx, New York, USA; New York Yankees left fielder Aaron Hicks (center) is walked off the field by manager Aaron Boone (left) and right fielder Aaron Judge (right) after colliding with shortstop Oswaldo Cabrera (not pictured) while trying to catch a ball hit by Cleveland Guardians left fielder Steven Kwan (not pictured) for a single against the Cleveland Guardians during the third inning in game five of the ALDS for the 2022 MLB Playoffs at Yankee Stadium. Mandatory Credit: Brad Penner-USA TODAY Sports

The New York Yankees are headed to the ALCS after taking down the Cleveland Guardians 5–1 in Game 5 of the ALDS. However, the team sustained an injury in the third inning when Cleveland lead-off man Steven Kwan blooped a fly ball to shallow left field.

With shortstop Oswaldo Cabrera and Aaron Hicks both calling for the ball and running full speed, they collided with one another, as the ball dropped safely to the ground but left Hicks in a heap.

It was obvious that Hicks was injured after the play, but Oswaldo popped up immediately with a youthful step. The Yankees were forced to take out the veteran outfielder, which could spell the end of his career donning pinstripes.

“Extremely disappointed,” Hicks said after the game. “This is something special, and I want to be a part of it.”

The Yankees need all hands on deck, so even losing Aaron Hicks is a tough blow:

With the Yankees pushing toward the World Series but needing to overcome the Astros, they needed all hands on deck. However, Hicks’s season will end prematurely after an MRI indicated the injury was serious enough to shut him down the rest of the way.

Unfortunately, Hicks is coming off a disappointing 2022 regular season, hitting .216 with a 33% on-base rate, eight homers, and 40 RBIs. His defensive metrics were decent, but there were moments where he seemingly jogged to the ball and didn’t exert maximum effort, which led to the Yankees eventually replacing him with Harrison Bader.

There’s a strong argument to make that Hicks might’ve played his last days with the Yankees, given his lack of production and diminishing efficiency over the past few years. Hicks is in the middle of a seven-year, $70-million deal that doesn’t expire until the 2025 season. He’s still owed $10.5 million in base salary for the 2023 campaign, but the Yankees may be looking to offload his contract to another team during the off-season.

Similar to how the Bombers took on the two years, $50 million for Josh Donaldson, they may be able to package Hicks into a larger deal that involves some prospects. While it is far from reality just yet, there were reports that the Yankees were floating the idea of trading Hicks at the deadline in August but couldn’t find any suitors.

Having outfield depth is always a good move, and with Cabrera rising to the occasion and projecting as a starting 2023 outfielder, they don’t necessarily need Hicks on the roster. They can likely find a more cost-efficient player who will produce far more in a reserve role.

Nonetheless, with Isiah Kiner-Falefa’s struggles at shortstop, Hicks was presented an opportunity to make an impact in the postseason. Unfortunately, it was short-lived, but he will have the luxury of routing his team on against their arch-playoff rivals.