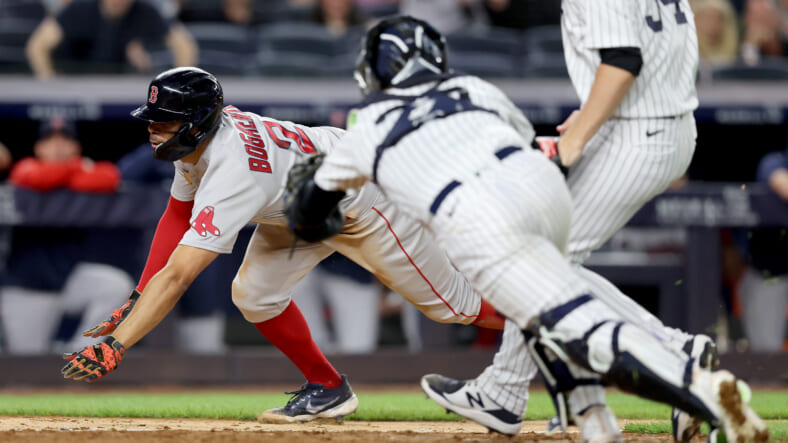 The New York Yankees faced off against the Boston Red Sox ahead of the All-Star break on Friday evening in the first of a three-game series. Lefty pitcher Jordan Montgomery got the start in the Bronx, lasting 6.0 innings and giving up three earned runs, including four strikeouts and two homers allowed.

The Yankees tallied nine hits but struck out 10 times, failing to produce enough production to push them over the edge. This was a winnable game for the Bombers who have lost three of their last four games coming off a series loss to the lowly Cincinnati Reds.

Montgomery has started off his July with solid performances, allowing three earned runs over his last 10.2 innings. His June was a bit more tumultuous, hosting a 3.66 ERA, giving up 13 runs over 32 innings. However, he was solid against the Cleveland Guardians and Boston Red Sox.

The Yankees starting rotation has faced a bit of adversity lately, but Montgomery has been one of their more reliable options. The offense wasn’t able to produce enough support, losing in extra innings courtesy of a wild pitch from Michael King, allowing Xander Bogaerts to score from third base.

Aside from one poor pitch from King and Aroldis Chapman giving up an earned run, the bullpen was solid. Wandy Peralta gave up just one hit over 2.0 innings and Clay Holmes struck out three batters in his inning of action.

Offensively, DJ LeMahieu had a fantastic game, tallying three hits over five at-bats. Giancarlo Stanton launched a three-run homer in the bottom of the 3rd inning, driving in LeMahieu and Anthony Rizzo. Once again, struggling slugger Joey Gallo recorded two strikeouts over three at-bats, lowering his batting average to .161. He features a 28.6% on base rate this season, one of the worst numbers on the team.

The All-Star break can’t come up fast enough for the Yankees, who still feature a 12-game lead but are losing ground to the Dodgers and Astros in the overall standings.

The Yankees will take on Boston in the second game of the series on Saturday evening at 7:15 PM. Jameson Taillon will toe the slab, coming off another questionable outing, giving up six earned runs over five innings against Boston on July 10.

The Yankees recently returned Jonathan Loaisiga on Thursday, which should contribute to their bullpen significantly. Luckily, Aaron Hick was able to make a comeback from a minor bone contusion on Friday against the Red Sox. Just three days earlier, Hicks hobbled off the field, unable to put any pressure on his right leg.